It Could Happen to Anyone

December 11, 2017
No one can explain why the jew, g*d's chosen and a being of purest goodness, is constantly attacked by the rest of humanity, the future slaves they affectionately call "cattle." There is ordinary and boring evil in the world and this banal malevolence often assumes the shape of incorrectly made swastikas in highly credible "Hey rabbi, watcha doin'?!?" incidents. It's critical we have a "conversation" about the attacks on the innocent and loving merchant and if a little free labor can be obtained from the shkotzim in the process, so much the better.

A large swastika was spray painted on the garage door of a Jewish family in Charlotte, North Carolina.

This is proof that you deserve your coming genocide, gentiles. Working for your racial survival is wicked, just look at my garage door and not my paint-soaked hands if you have any lingering doubts about the inherent evil of your existence.

The swastika was drawn days after the family put up decorations for Hanukkah, the family’s rabbi, Dusty Klass, told the television station.

Meet the literal "Hey rabbi" from our favorite cartoon. A minor holiday that the demonic jew used as a cudgel against Christian traditions is under attack! We need a lot more speech and thought crime laws, that's for sure.

The rabbi said the family wanted people to know that the incident had occurred to open a discussion about it.

I know, surprising. It's almost as if this is a manufactured incident being cynically exploited to attack normal White America, but on the other hand six zillion went up the chimney so you better shut up and feel bad about this obvious hoax. 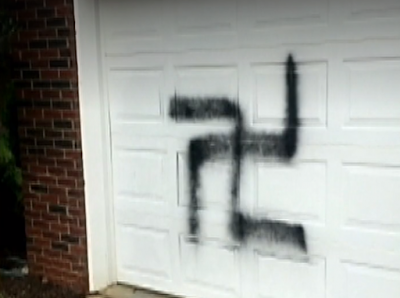 “They were shocked, they were hurt, they were angry,” Klass said. “It was really important to them that people know this happened here in Charlotte and that it’s not OK and that it could happen to anyone and that we need to know about it and talk about it so we can do something about it.”

Literally shaking, not okay, it's current date and location, we need a long lecture on why you deserve to be hated minority in your own country followed by your eventual complete destruction.


Police painted over the swastika on Tuesday morning before the family’s children could see it, WBTV reported.

A kosher garage needed painting, but honest labor is not for g*d's favorites. The solution? A phony hate crime to force the Blue Lives to act as the moronic thralls promised by the talmud. How to extort compliance and servile behavior from the goyim with one weird trick. Someone made a comically inept not-see symbol on my bank, you're morally required to bail us out. I think I was called a name, you must vote for globalism. All four of my mothers were killed in homicidal gas chambers, you must let in millions of moe-ham-head-dan enemygrants. Oy vey, we're the victims here, get on your knees and do our bidding, from menial labor to insane betrayals of your ancestral homeland. How about "no."

There were 15 reported anti-Semitic incidents in North Carolina in the first six months of 2017, according to Anti-Defamation League statistics, compared to one in the state in all of 2016.

This explosion of Tar Heel nawrtzee behavior is highly legitimate, that's for sure. 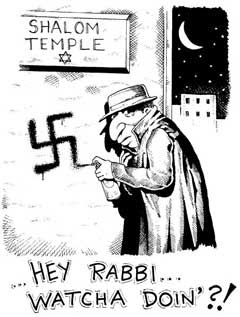