December 28, 2017
How about some post-Christmas bargain shopping, shkotzim? Think of the amazing bargains you can get on wrapping paper and the like. Plus, it's an opportunity to "pump" money into the local economy, just like the enemygrants we're using to replace you. If you're lucky, there might be some cool and vibrant "teens" who openly express their soulful life experiences, not like stiff and boring Whitey. These are your equals, although their culture is a lot more genuine and warm, as evidenced by the ability to turn dat mall upside down. Continue spending, goyim! Everything is fine! Stay asleep. Consume. Die.

A New Jersey mall was forced into lockdown after a crowd of between 700 and 1,000 juveniles became unruly to the point where shops shuttered their windows, the escalators were switched off and the police were called.

It's the time of the year when we celebrate the rich negro tradition of kwanza putting the local mall on tilt. A thousand dark inferiors provide a preview of the cannibal state that will exist if we lose, if we allow ourselves to become a hated minority in our own homeland. Just a little "unruly" behavior, you were young once, right? When the light of civilization goes out it will stay out, leaving an endless night populated by poorly formed parodies of humanity. First they'll destroy everything we built, then they will turn on each other. Back to primitive savagery within a generation's time, the price we paid because we didn't want to be called names, hold back this nightmare.

The incident began at approximately 7:30 pm local time at the mall entrance beside a JC Penney store. Responding officers encountered a crowd of between 700 and 1,000 unaccompanied juveniles.

If you still think being unarmed is a good idea or that "high capacity magazines" are unnecessary, consider the implications of turning a corner and stumbling into four digits worth of "unaccompanied" jungle monsters.

Over the last few years malls nationwide have seen an increase in the number of unattended juveniles that are dropped off at retail shopping centers, creating disturbances and engaging in criminal behavior,” Cherry Hill police Department wrote in an online statement ahead of Tuesday evening’s madness.

It's almost like there's a completely predictable pattern of dysfunctional behavior associated with the "African-American" but the talmudvision said they were fully human and I believe jew lies.

The department would ultimately lament the irresponsible decisions by so many parents to leave their unattended children en masse to disrupt other shoppers as they continued their holiday celebrations.

LOL. I'm sure that's how it was expressed.

"Good sir, my bosom is filled with grievous lament regarding the unwelcome decisions made by so many of the Patriarchs torn from the Horn of Africa by cruel slavers."

"Shut up and keep firing, you idiot!"

As the mob became increasingly unruly, an announcement over the mall’s loudspeaker instructed everyone under the age of 18 to leave the mall immediately, informing them that additional police were already on their way to the scene.

Let's try reasoning with the 70 I.Q. genetic alien. Good luck, you're going to need it. 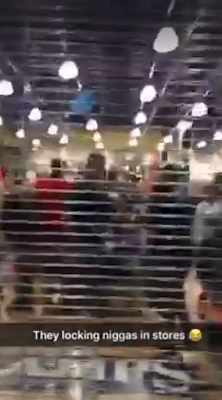 While dispersing the crowd five juveniles, four from Camden, NJ and one from Cherry Hill, NJ, were arrested for charges ranging from disorderly conduct to resisting arrest.

I guess we should be happy that a few token arrests were made. We are definitely not in a decline and fall here, no way.

Lt. Robert Kempf, a spokesman for the Cherry Hill Police department, dismissed rumors circulating on social media that firearms were brandished during the chaos, reports NJ.com.

Negroes with guns? Ridiculous. They were probably just brandishing sandwiches and poetry anthologies during the tribal violence ritual.

Yeah, sure seems similar. Oh well, it's not like we can learn anything from this. Say, is that Liberia Ball on the telavivision?