December 15, 2017
Europe's Visegrad countries have been the source of most of the optimistic news from an otherwise rapidly dying continent, but as usual the merchant is hard at work to change this and has somehow risen to leadership in Poland. Now all that remains is determining how much of a disaster this is and how much damage the demonic alien can do to a healthy White nation. The nightmare of jewish communism has made the East resistant to the more outrageous kosher attacks, but here we are, handing another nation over to the wandering outsider, the enemy within, the devil with a thousand masks and a horrible bargain for every last goyim.

In his first speech as Poland’s prime minister, Mateusz Morawiecki said that non-Jewish Poles who saved their “Jewish brothers” during the Holocaust represent the “essence of what it means to be Polish.”

Helping the hostile alien is the very essence of who we are. We bring in poisonous snakes from the cold; we're very proud of this. I can't wait to see how much praise this will earn me in my unmarked grave.

Morawiecki, a former banker who in September spoke about his Jewish roots – two of his aunts are Jewish — in a speech about rescuers of Jews in Warsaw, presented his inaugural address Tuesday to the parliament.

A jew in banking? I know, I was surprised, too. I guess the good news is this rootless cosmopolitan appears to be some sort of mischling and not a full-blooded tribesman. The bad news is literally everything else about this situation.

Morawiecki, who was the finance minister before his promotion in a surprising reshuffle in the government of the right-wing ruling Law and Justice Party, spoke mostly about the economy and foreign relations.

Yeah. "Surprising" is definitely one way to describe this sudden shift away from common sense nationalism toward semitic delusion. "What the fuck, Poland?" is another more direct assessment. 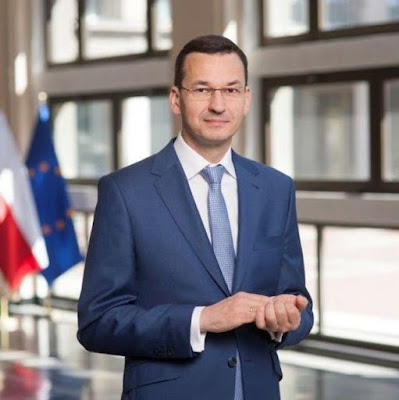 Trust me, I'm a part-jew bastard.

But in speaking about the national identity, he said: “The deep community dimension is inscribed in our tradition: Assistance to people in flight, Żegota saving our Jewish brothers and Solidarity. This is real proof of what Polishness is and what the community is.”

To translate this verbal flatulence into plain speaking: You can expect lots of rapefugee invasion now that g*d's chosen are in control again.


Morawiecki, who was not even a member of Law and Justice two years ago, joined the government as minister for economic development in 2015 before adding the post of finance minister last year.

Don't worry unclean meat, I mean friends, I'm definitely one of you. I support the law and justice and all of that. Now, let's see how many Somalis we can jam into Krakow.


His Jewish roots were known in Poland. Morawiecki spoke about it in some detail earlier this year at a ceremony at the Warsaw Zoo honoring a former zoo director and his wife, Jan and Antonina Żabiński, who saved hundreds of Jews there, and other rescuers.

You should have known not to trust me. You knew I was a jew.


Polish non-Jews killed at least 1,500 Jews in a series of pogroms during and directly after the Holocaust, according to the Polish chief rabbi, Michael Schudrich.

The precious one thousand five hundred lost in the holohoax. Your nation must be destroyed because of this.