December 03, 2017
The may-hee-can enemygrant should stop murdering random White women and start behaving itself any time now. After all, they are all future establishment Republicans, are hard workers who do jobs you won't, are capable of making amazing burritos, are exceptionally clean and are solving the critical "not enough people" problem in a nation with over 300 million bipeds, a large percentage of which are basically worthless. It appears the Reaganization of the wetback is taking a little longer than originally anticipated, but you must have faith in the globalist death cult and the chosen people behind it. Everything is working fine, just consider the amazing insights of the "educated" stealth swimmer.

A Texas university newspaper is apologizing after a student wrote an opinion piece that condemns white privilege and accuses white people of being an “aberration” that “shouldn’t exist.”

A communist indoctrination center produces a brown animal who wants you dead and has quasi-intellectual reasons for this, as opposed to the typical greaser whose "Eyyyy, I hate dem gringos" arises organically without the aid of a kosher curriculum. This is a major leap forward in eventually turning the lazy, sullen invader into something resembling a human being. If you can't see the glacial progress it's because you're a "racist" and by the way, you and everyone you care about shouldn't exist and should probably die, perhaps via a stolen firearm ineptly discharged at a pier.

“Now I have become white, the destroyer of worlds,” Rudy Martinez, a student at Texas State University, wrote in an Op-Ed published by the University Star on Tuesday.

If Whites were even 1% as bad as this alien, who has been an endless recipient of our suicidal generosity, thinks we are there wouldn't be a single shit-colored "minority" left on the face of the Earth. Instead, we fund and nurture the inferior failed branches of humanity and earn nothing but enmity through this jew-encouraged transaction. I guess wanting a "thank you" is a bridge too far, but is it too much to ask that the hostile outsiders we're supporting don't harbor genocidal fantasies against the ones providing the endless handouts and appeasements?

Martinez then rambles about his justifications for hating white people.

This I believe, probably lapsing into "Spanglish" and gasping and wheezing in between moronic attacks on the only race on the planet that is willing to be replaced in their own countries to prove how "virtuous" we are.

“When I think of all the white people I have ever encountered - whether they’ve been professors, peers, lovers, friend, police officers, et cetera - there is perhaps only a dozen I would consider ‘decent,’” Martinez wrote.

LOL, "lovers." Yup, I'm sure this unwashed, scrawny, effeminate and sawed-off Don Juan be gettin' all duh wite wimmin and sheeet. It doesn't even like its jew professors, but I'm sure the traveling merchant will have no problem turning scumbags like this into the docile slaves promised by the talmud once Whites are gone. 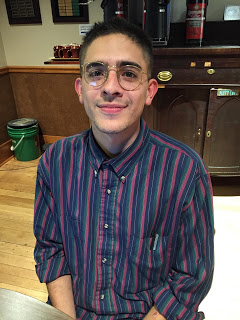 If I had this alien's physique I don't think I'd be spoiling for a civil war.

In the piece, Martinez claims that white people in the US are an “aberration” who descended from Europeans and abandoned their identity “in search of something ‘new’ - stolen land.”

Muh stolen land. We built civilization from an empty wilderness, brushing aside a few stone age squatters in the process. Compared to the human sacrifice, barbarism and wars of enslavement and annihilation pursued by the embarrassed ancestors of this la-teen-oh, we were saints.

The article does not include any biological reasons why white people are inferior, and seems to flip the script at one point, saying that being white is more of a choice.

The academic wasteland makes an interesting vacation choice. Stare with slack-jawed awe at the bizarre statements and total lack of evidence. Marvel at the six figure pound of flesh debt acquired in pursuit of this idiocy.

“You were not born white, you became white. You actively remain white. You are estranged from yourself and, in that absence, have been instilled with an allegiance to a country that was never great,” the piece continues.

To call this meaningless word salad "rambling" is to give the may-hee-can version of Urkel way too much credit. There isn't even the illusion of a rational argument here, just asinine drivel from a mind that can't even comprehend the achievements of Whites, let alone judge them. Attend that "college," gentiles! The jew will teach you to write paragraphs worthy of a syphilitic madman.

Martinez then ends the piece by calling for the end of the white race, citing his personal “hate” for them.

It isn't even mildly shocking anymore. If this is what the weakest, softest members of the invading army think of us, imagine the opinions that awkwardly coalesce in the primitive minds of the 70 I.Q. rapists, murderers and gang members pouring across an open border. Maybe the jew wasn't entirely honest with us.

Denise Cervantes, the editor of the paper, issued an apology after the piece “received widespread criticism.”

Can the last White person in Texas please turn off the lights on the way out?

Cervantes said that the original intent of the article was to “comment on the idea of race and racial identities.”

There were definitely good and pure intentions going into this, I don't doubt this for a second.

“We acknowledge that the column could have been clearer in its message and that it has caused hurt within our campus community,” Cervantes said.

I don't think that a lack of clarity in delivering the White genocide message was the problem here, to be totally honest with you.

The board said that they will create “more rigorous guidelines” and “methods of oversight” to review content before it is published. The next issue will also include letters to the editor responding to Martinez’s piece.

Well, that's a relief. Our high trust "multi-culti" paradise can resume its incredibly smooth functioning after this minor hiccup.

Former TSU student body president Andrew Homann said that the piece was “blatant racism against white people for nothing other than the color of their skin.”

Really? Do you think so? Wow.

“Rudy literally states he hates white people because we shouldn't exist,” Homann wrote in a Facebook post. “No one is going to take this paper seriously if the editorial board continues to allow baseless garbage to be published week in and week out.”

Don't worry, the mature adult voice of reason is on Jewbook trying to get some "likes." 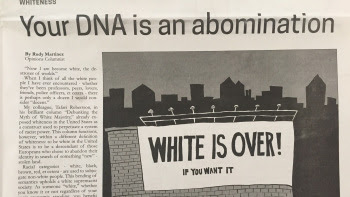