January 29, 2018
If we're going to restore our homelands and our people we must also restore the healthy traditions that were endlessly attacked during the disastrous jewish century. The atomized individual, living for nothing greater than the next moment, represents no threat whatsoever to the nation-wreckers. Unfortunately, turning to our current "spiritual leaders" isn't any better and is perhaps even worse, since now the nihilistic evil wraps itself in robes of white and proclaims its virtue, rather than being an obviously destructive end product of apathy and systematic kosher demoralization.

Consider the cuck-o-lick church and its enthusiastic promotion of the islamic conquest of Europe. It's hard to imagine how this madness benefits the church itself or any of its handful of remaining adherents. This mystery is solved when the same dead faith turns around and warns us about "anti-semitism." Another institution is conquered and completely poisoned by the enemy within, the innocent Light of the World so unfairly persecuted by the "cattle." Come out and partake not in the sins and receive not the plagues.

Pope Francis called on European countries on Monday to do more to fight anti-Semitism, saying indifference on the issue was a virus that could allow the ideas of racial hatred to spread.

Much more needs to be done, as always. We must avoid the virus of indifference, the same numb weakness constantly encouraged in the face of invading columns of sand monsters eager to rape your daughters and hack your head off. Complete and total denial is fine when it comes to your nation committing moon cult suicide, but not when it comes to the unbelievable sufferink of g*d's favorite people. We must constantly be vigilant for any criticism of the poisonous mushroom. You can turn in your neighbors, maybe your own family!

“We are responsible when we are able to respond. It is not merely a question of analyzing the causes of violence and refuting their (anti-Semitic crimes’) perverse logic, but of being actively prepared to respond to them,” he told the event organized by the Organisation for Security and Cooperation in Europe (OSCE).

A pope who belongs on the end of a rope offers a bizarre and pathetic call to arms. Get ready to die for the jew, gentiles! What does he think this is, World War 2? Meanwhile, a "security" organization worries about unkind words directed at a parasitic tribe g*d loves so much he's going to send them to hell, while hordes of dark inferiors keep claiming territory and war trophies in our ancestral lands.

A number of European nations have made it illegal to deny the Holocaust, the Nazi attempt to exterminate European Jewry during World War Two.

Deny Soviet propaganda and go to prison. We are a free and open society. Don't have children, they could grow up to be nawrtzees. The precious sixty zillion lost in an attempt to exterminate European jewry with fire pits and pedal-operated skull smashers. Meet your new neighbors: moe-ham-head, another moe-ham-head, moo-hamm-hedd and barrak from Kenya. 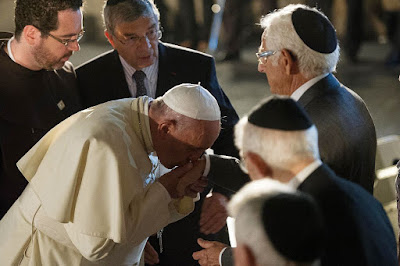 That's it shkotzim, bow and lick like the dog you are.

Last week, Germany’s lower house of parliament called for the creation of a new government post to oversee the fight against anti-Semitism, following the burning of Jewish symbols and Israeli flags.

A nation that is losing its national character and becoming Syria West is worried that satanic symbols got cooked, presumably in the same fire pits where the holohoax happened according to the first draft of that ridiculous tall tale. We need more thought crime laws so that the last days before the complete islamification can be as bleak and nightmarish as possible.

Francis, who made an emotional visit to the former Nazi death camp at Auschwitz in 2016 and visited Rome’s synagogue the same year, said the “vaccine” against “so many deplorable forms of apathy” is memory.

Chase empty materialism, destructive hedonism, pitiable narcissism and all the other kosher evils, but never forget the innocent and virtuous children of the devil. I saw the swimming pool and tennis courts at the Soviet reconstruction of Auschwitz. I witnessed man's inhumanity to man, the banality of evil. We should spend every waking moment feeling bad about all of this, even as the scimitar bites into our flabby neck.

Quoting his predecessor, Pope John Paul, Francis said everyone should work for a future where “the unspeakable iniquity of the Shoah will never again be possible.” Shoah is the Hebrew word for the Holocaust.

Poland, where Auschwitz is located, has also seen acts of anti-Semitism recently. One, exposed by a television station, showed people in a forest last year chanting “Sieg Heil” on what would have been Adolf Hitler’s 128th birthday.

If there's hope for Europe, it's in the Visegrád countries.

About 60,000 people, some carrying banners with slogans such as “pure blood, clear mind,” marched in a far-right demonstration in Warsaw in November and arsonists set fire to a synagogue in Sweden last month.

Oy vey, healthy Whites showing pride instead of guilt in Poland! Then a "Hey rabbi, watcha doin?!?" incident in Sweden. These two events are clearly connected!

Ronald Lauder, president of the World Jewish Congress, said: “In country after country, we are watching a growing wave of far-right, ultra-national, and in some cases neo-Nazi parties gaining strength.”

I wonder why that is. It has nothing to do with our attempts to destroy the indigenous population with enemygrants and spiritual evil, that's for sure.

“New Europe is suddenly looking an awful lot like the Europe of the 1930s,” Lauder told the conference held at Rome’s foreign ministry.

We can only hope. 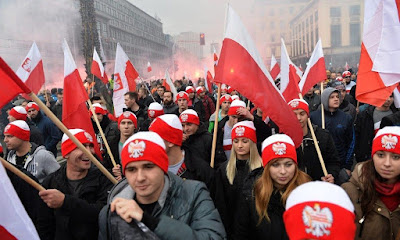 Whites are waking up.