Eroding Rule of Law in Texas

January 22, 2018
A civilized nation requires civilized people. This is so straightforward and obvious that it's guaranteed to go wrong. We need a lot more may-hee-can inferiors and once we've taken their worst there are plenty of other shitholes to mine for criminals and permanent welfare cases. It's important we do this because God told me to do it and if the voice of the divine happens to sound a lot like a jew lecturing in our media or schools, I'm sure that's just a crazy coincidence. Once they're here we'll do our best to bury the predictable criminality and if that doesn't work the Big Guy upstairs will give more detailed instructions in appeasement and cowardice re: the foreign invaders.

A Comal County judge said God told him to intervene in jury deliberations to sway jurors to return a not guilty verdict in the trial of a Buda woman accused of trafficking a teen girl for sex.

A senile and crazed piece of shit dressed in robes knows what's right. The Creator spoke audibly to Moses, to Jesus and to a Texas judge during a trial for la-teen-oh sex trafficking. This seems very reasonable.

Judge Jack Robison apologized to jurors for the interruption but defended his actions by telling them, “When God tells me I gotta do something, I gotta do it,” according to the Herald-Zeitung, in New Braunfels.

Well, golly gee, when gawd and jay-sus are finnin to get me to do something, y'all got to get on it. Again, this weak, gutless insane worm represents the last line of defense against greaser sex rings. Natural conservatives, prostituting the children Whites won't, here for better child rape, pumping money from "tricks" into muh Gee Dee Pee. The heavens opened up and the Unmoved Mover spoke: "Immigration is an act of love. It's good for muh economy, let it happen." 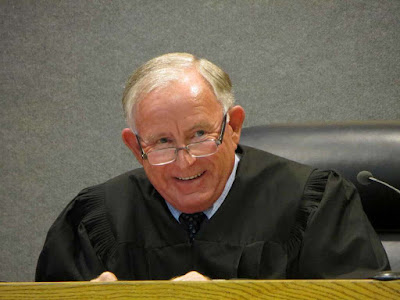 Look at all the sanity.


The jury went against the judge’s wishes, finding Gloria Romero-Perez guilty of continuous trafficking of a person and later sentenced her to 25 years in prison. They found her not guilty of a separate charge of sale or purchase of a child.

The will of the almighty is thwarted by a jury that looked at the actual facts of the case instead of hearing voices from the dog next door or whatever Judge Jerk-off's excuse was.


Robison’s actions could trigger an investigation from the State Commission on Judicial Conduct, which has disciplined Robison in the past.

I know, I was surprised, too. This mentally defective and weak moron has a history of this sort of behavior? Who could have predicted this?


In 2011, the commission slapped Robison with a private reprimand for improperly jailing a Caldwell County grandfather who had called him a fool for a ruling Robison made in a child custody case involving the man’s granddaughter.

Whether this decision was inspired by a spectral hand writing on the wall or the like remains unknown. 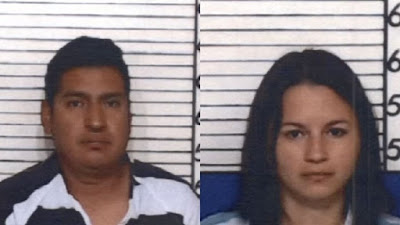 The reprimand, the commission’s harshest form of rebuke, said Robison “exceeded the scope of his authority and failed to comply with the law” by jailing the man for contempt of court without a hearing or advance notice of the charge.

Wow. So harsh. I'm sure that set him straight. We won't be getting any more "Jehovah and my one-third of an erection thinks she's not guilty" from this pathetic idiot, that's for sure. 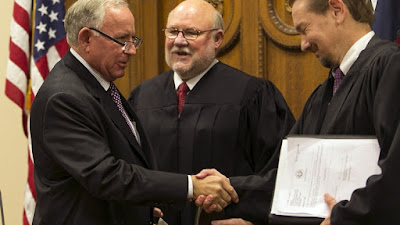