January 24, 2018
Please watch the following amazing video. Be sure to copy and spread it far and wide.


Welcome to Germany in 2018. An airport becomes the venue for open warfare between identical looking groups of foreign inferiors. The "diversity" has landed. We need a lot more of this in Europe, just ask any jew. The moose-limbs are chanting "fascist." Good thing we "won" World War 2 and prevented that, at least until now.

A mass brawl has broken out at a German airport, sparked by demonstrators protesting about Turkish military action against Kurdish fighters.

It sure is exciting how these exotic mud world tribal struggles can now express themselves in a rapidly dying White homeland.

Video shows protesters waving flags exchanging punches with a group of men, who ran towards them, and some of the flags being used as improvised weapons.

A army of conquest plants its flag, then uses it to try to skewer other moe-ham-heads. "Women and children" flee from "war," only to begin a new fighting age male conflict at the ticket counter in a debased and rapidly dying Germany. Somehow the magic soil failed to transmute the scum into good little workers and consumers, or even reduce their massive animosity toward their fellow garbage animals. Maybe we don't actually need to enter "multicultural mode" in order to "survive." I think the jew might have stretched the truth a little bit. 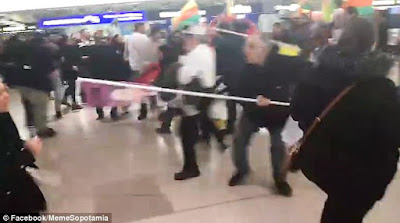 The brawl began by the Turkish Airlines desk at the airport's Terminal B, Neue Presse reported.

Just when you thought air travel couldn't get any more unpleasant, now you can expect to deal with sand wars from idiotic savages while you're trying to get muh tickets for that dream vacation to Diyarbakir.

Turkey's army launched a major air and ground operation, accompanied by allied Syrian rebels, in northern Syria at the weekend in a bid to oust the US-allied Kurdish YPG militia.

We must arm the "moderate" rebels and pour tax dollars and American lives into this meaningless and destructive never-ending conflict.

It considers the YPG to be a 'terrorist' group, as well as the Syrian offshoot of the Kurdistan Workers' Party (PKK), which has waged a bloody three-decade insurgency against the Turkish state.

Over thirty years of mahound fanatics killing each other for the rights to a few piles of rocks and some dirt and yet there's still a few cranks who claim there's no such thing as progress.

On Monday Turkish soldiers and their Syrian allies launched a new attack on the Kurdish militia from Azaz, about 20 kilometres to the east of Afrin, as part of 'Operation Olive Branch'.
LOL. As part of Operation Peace and Love we shot some missiles at rag-heads. I feel a lot was accomplished here.

The Britain-based Syrian Observatory for Human Rights says 21 civilians - including six children - have been killed in the operation but Ankara says it has only hit 'terrorists'.
Strictly speaking, this is a true statement. 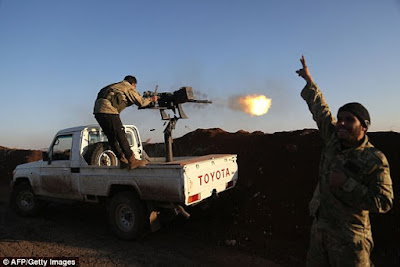