January 30, 2018
To the extent that nations even exist, they definitely aren't the people that form them. Instead, they are merely a set of good ideas enshrined in language that can be freely misinterpreted or ignored if it serves the present agenda. All people are exactly the same and equally capable, so it's reasonable to assume that as long as your amorphous propositions are high quality the resulting nation will reflect those exemplary and tenebrous ideals. This is why the moose-limb horde is a tremendous boon for Europe and the may-hee-can disaster is going to save the USA. We don't even need to bother trying to assimilate the alien hordes, a yellowed and rotting document written by men whose memory needs to be erased will do all the heavy lifting, don't worry. Liberia obviously knows this, as they prepare to transform their pathological Heart of Darkness into a paradise by changing a few words on a scrap of paper.

Liberian President George Weah said Monday he would seek to remove a "racist" clause in the country's constitution that restricts citizenship to black people, and pledged to take a pay cut in a dire economy.

Ayo. Hol up. Is you sayin' we wuz "racists?" Expect a huge explosion of immigration to Liberia now that anyone can become a citizen. The only problem was the "reverse racism." With this solved, we should see huge columns of fighting age European Whites flooding into one of the worst countries on Earth.

Liberia was founded by freed slaves from the United States in 1847, who inserted the requirement into the constitution to create "a refuge and a haven for freed men of colour".

A good idea, poorly executed. They all should have gone back.

Weah said in his first state of the nation address that he believed this restriction was "unnecessary, racist, and inappropriate for the place that Liberia occupies today in the comity of nations," as well as holding back business.

Hopefully you won't have to explain to your children why you didn't invest in Liberia. Look out South Sudan and Chad, there's a new major player in the "comity of nations."

That feeling when your constitution is fixed and everything is going to get better now.

Calling for that provision to be removed, Weah also called for the ban on foreign ownership on property to also be struck from the constitution via referendum.


"No foreign investor... will be willing to make significant direct investments in our country if they cannot own property," he noted.

This will encourage the "Me Chinee, me pray tlick" stripping of resources that your fellow African hellholes have greatly benefited from.

Weah's wife, Clar, has faced intense criticism for her Jamaican roots in Liberia. She was denied a passport on the grounds she was not a Liberian citizen, and the president called for restrictions on dual citizenship to also be lifted.

Jamaican me crazy, Liberia! Dual citizenship, what could possibly go wrong? Those vaguely humanoid rodents with the #6 noses and weird little caps that run our media and government are probably also from the Caribbean or something.

The new president, who joked he had only had a week to get his head around the job, also announced he would take a 25 percent pay cut in view of the state of the economy and the suffering of his people, who are some the world's poorest.

Make Liberia Great Again. The 60 I.Q. average, it has consequences. 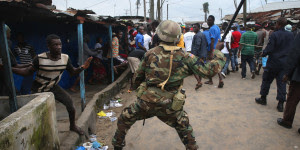 "I am informing you today, with immediate effect, that I will reduce my salary and benefits by 25 percent," he said to a huge cheer from the audience.

I will only be receiving 500 trillion Liberian Cowries this year, the equivalent of $73.49 USD.

"Our economy is broken; our government is broke. Our policy is in freefall, inflation is rising, unemployment is at an unprecedented high and our foreign reserves are at an all-time low," Weah noted.

Muh economy. Everything is burning, there's all against all, Ebola outbreaks, giant piles of garbage, child soldiers, albinos being hacked up for amulets, etc. We better revise the hell out of those founding documents.

Schools and universities were the "constant and major priority during my administration," he added. 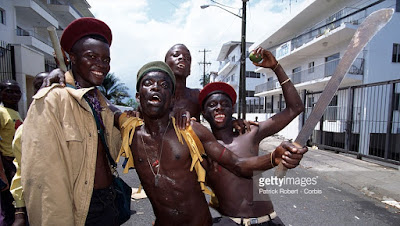 Good boys, about to go to college.

Sirleaf was present at the ceremony, which Weah said "shows how far we have come as people" after the bitter political divisions of Liberia's horrific 1989-2003 civil war.

Many of the huge fires devouring poorly built mud huts and reeking slums are now mere smoldering embers, for example. 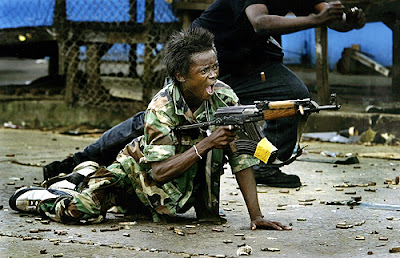 He has given cabinet posts to a mixture of inexperienced but loyal figures from his Congress for Democratic Change (CDC) party, along with some key members held over from the former government. 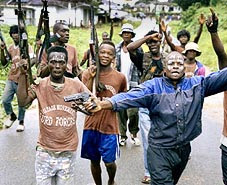