January 19, 2018
A nation is an idea, a nebulous concept enshrined in words that are constantly changing or losing their meaning. Any human-shaped creature immediately absorbs this metaphysical construct upon breaking the plane of the border, so worrying about losing your country, as if it was ever yours to begin with, is silly. We have a people race to win, do-gooding is more important than survival and inside every ululating sand monster is a good little work unit that can be used to replace you and the children you didn't have with no loss of national continuity whatsoever. If there's the occasional five day riot or self-driving truck, that's nothing that can't be prevented by ugly statues with an even ratio of male and female genitals.

Sweden’s Security Service has warned of a risk of a new Islamist terrorist attack in the country in 2018.

Yeah. I think that's a safe prediction there, Nostradamus.

Merkel's teeth are apparently a little too utilitarian and unsightly for the Swedes. Instead, we will deploy goofy lion statues that should discourage moe-ham-head from plowing into crowds of free-range victims and help him become a good little bar code in the strident globalist bazaar we're building. 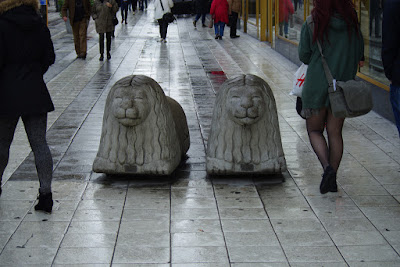 This ugly degenerate art should make it slightly harder for foreign invaders to kill you.

Sweden’s Security Police SÄPO reinstated the terror threat level to “elevated,” citing the high risk of a repeat terrorist attack against the country by Islamists.

Time to display your gratitude for our sickening weakness. It wasn't "women and children" fleeing "war" it was fighting age males marching off to destroy the kuffir.


The increased threat level is based on data from the National Center for Terrorism Threat Assessment (NCT), which includes SÄPO, the National Defense Radio Establishment (FRA) and Military Intelligence and Security Service (MUST). This corresponds to three on a five-degree scale, a level Sweden has had since the failed terrorist attack in Stockholm in December 2010.

I was curious as to what the different levels on the scale were and after some exhaustive research, I can now tell you.

Level Two: Chaos and collapse. Acid throwing, car-burning, picking up objects that turn out to be grenades, five day riots, beheadings, organized child rape. Endless excuses are made for the pathology, "racists" are blamed.

Level Four: Eurabia. Rounding up and massacring the remaining indigenous population, cities constantly on fire, cultural treasures destroyed, routine atrocities. The new moose-limb government praises the heroes of jihad and calls for the complete destruction of the Whites that once welcomed these moronic and bloodthirsty monsters.

Level Five: The Endless Night. Civilization is completely destroyed, you can't find two bricks on top of each other, Scandinavia is now indistinguishable from the worst parts of Africa. Oh well, at least we weren't "racist."

We don't want to be "islamophobic," of course. Allowing the worst and most pathological elements of an evil false religion to dominate proves our virtue. I expect lots of praise when I'm happily tucked into an unmarked grave.


“Today they can seem to operate completely unrestrained,” Ranstorp told the newspaper Aftonbladet.

Once they see how defenseless and compliant we are, they're bound to respect us.


According to Ranstorp radicalization amid the return of Sweden’s “foreign fighters” who joined Daesh (ISIS/ISIL) remains a major cause of concern. Ranstorp argued that Sweden’s prevention efforts to stop the dissemination of the extremist agenda have been “too bad.”

The mighty strength of diversity. Exciting vibrant "Daesh" fighters eager to cut your throat, not like stiff and boring Whitey who would probably have reservations about massacring unarmed and completely harmless Swedish Eloi.


“It is spread by groups seeking to limit women’s rights and freedoms. It is they who promote anti-democratic and violent messages,” Ranstorp said, citing mosques and Quran schools that promote extremist agenda.

They're not embracing the spiritual nihilism, empty materialism and jew-sponsored mental illness, preferring their own desert stone cube madness. Maybe that whole "we're all basically the same and every belief is equal good" kosher claim wasn't totally honest.


Following the Stockholm attack, however, the city council has installed 17 concrete lions on the Drottningsgatan pedestrian street, where the deadly attack occurred. In 2018, Stockholm City will place another 80 lions, equally distributed as males and females, as roadblocks to prevent vehicular terrorism.

This is real. Petrified big cats with no "gender gap," how inspirational and progressive. They have eyes that don't see, ears that don't hear, just like the doomed native population sleepwalking around them. The ugly cement lions shall lie down with the lambs (to the slaughter) and a sand monster shall smash them to pieces.

After criticism that the lions were too flimsy, there are also plans to procure some bigger ones — three times larger and heavier than existing ones, the Mitt i news outlet reported.

I'm sure adding "bigger ones" will solve everything. R.I.P. Sweden. 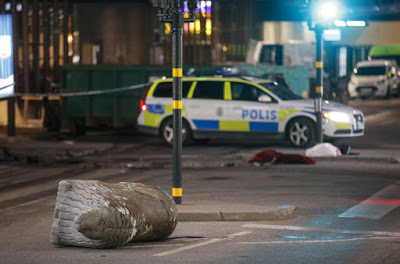