January 02, 2018
If I made a separate post for every appalling incident of non-White invader violence and idiocy on New Year's Day within formerly White homelands I'd still be talking about this in August, so this will be the final word on the subject. Please watch the following amazing video. Be sure to copy and spread, it's probably going to be taken down by the friendly merchant.


An African enemygrant makes its way through a crowd that doesn't contain a single White person. Are we in Kenya? Nigeria? Sweden? No, it's the rotting remains of France, a nation rapidly dying courtesy of invasion from without and spiritual sickness from within. We'll teach this undifferentiated dark mob our ways, we'll have them substitute for the children we didn't have while chasing kosher materialism. We jump ahead to the all against all already in progress. Animals from a nightmare have tipped over a car, I guess lacking the tools to set it on fire, the more traditional celebration of choice for "immigrants." This is, after all, a distinctly "French" cultural expression.

Every New Year’s Eve nervous car owners across France cross their fingers in the hope they can start the New Year with their vehicle intact. That’s because of a longstanding French tradition that sees youths in certain parts of cities torching scores of cars.

It's hard to think of something more emblematic of the French people than the charred remains of automobiles. Even the traditional French mosque, the proud past of self-driving trucks and the love of beheading kuffirs must take a backseat to vehicular arson, our great national pride.

The number of vehicles set alight on the night of December 31st climbed from 935 a year ago to 1,031, while arrests rose from 456 to 510, the interior ministry said on Monday.

Over a thousand cars burned in Paris in one night. "Diversity" is our mighty strength. They do the jobs Whites won't and you're not getting any younger, goyim. We have a vital "people race" to win here, and since everyone is exactly the same (Whites bad, jew good) if you can look at the sickening entropy of a once great nation and see a problem you must be a "racist."

Authorities have previously refrained from reporting on the number of torched cars on New Year's Eve after it was discovered that a district-by-district breakdown was fuelling destructive competition between rival gangs.

If we ignore the steadily devouring rot it will fix itself. Back to the video.

We get a scene of braying morlocks and then it's time for the Jesse Owens act. A female police officer, one of those butt-kicking women often depicted in Harvey Weinstein productions, is being used as a makeshift soccer ball by future Team France World Cup "stars" (Look at that amazing "pace," wow!). Mercifully, the footage abruptly ends.

The top suggested video by jewtube to watch after this: "Most Brutal Chimpanzee Society Ever Discovered." "Where is it and how soon can we move it into Europe?" wonders the jew. 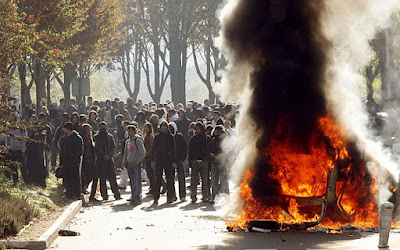