Buried Beneath the Rubbish

February 21, 2018
The negro is so obviously divergent from and inferior to the other races that it seems like a waste to even point out their predictable failure, pathology and idiocy. Then I remember that I live in a country where the media jew is constantly promoting the laughable myth of the cool, intelligent and highly sexually desirable (hint, hint shiksas) tar creature and there's actually a significant number of Whites who believe this ridiculous kosher illusion. So here we are, talking about giant piles of garbage in the Heart of Darkness. Left to their own devices, freed from the evils of muh slavery and muh colonialism, we can observe the 60 I.Q. and complete inability to connect basic cause and effect in action.

At least 17 people died after being buried alive in a 50ft-high pile of garbage when the filth fell on top of their homes in Mozambique.

The only difference is "skin color." It's just a White that got left in the oven for too long. We're all equal and interchangeable labor units for the semitic globalist bazaar. We hold these truths to be self-evident...

Heavy rains triggered the partial collapse of the huge mound of waste which crashed on top of seven houses in the Hulene neighbourhood in the outskirts of the country's capital Maputo.

We can now add "rainfall" to the list of things that are "racist."

The impoverished area sat right beside a landfill site and authorities fear more bodies are buried beneath the rubbish.

Nigga bodies (Ah!) trapped in a vile hell of their own creation. Dig through the trash to try to find the hominid trash. How many million should we put you down for, Luxembourg? 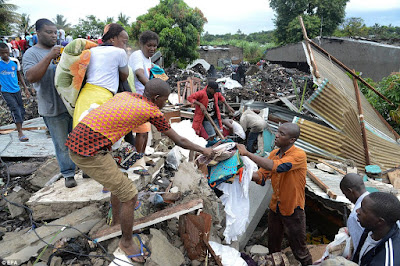 This picture wasn't taken in Calais, believe it or not.

The huge pile of waste rose to the height of a three-story building, according to reports, and the collapse happened at around 3am on Monday.

Another triumph of negro engineering. No wonder these genetic aliens are recruited as "human calculators" for our space missions. Back in The Mother the pyramid (of vile waste) building continues.

The houses were built illegally and authorities had previously asked the residents to leave, officials said.

No human being is illegal. These "undocumented" heaps of filth and appalling poverty are a mighty strength. 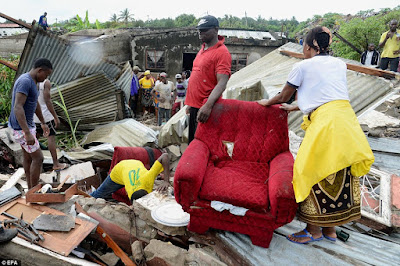 "Human progress is neither automatic nor inevitable."

'Up to now 17 dead bodies were recovered. We fear more might be unaccounted for,' a councillor for Ka Mavota Municipal District, Despedida Rita, said.

The solution is to get every last negro into Europe as quickly as possible.

Land pressure in many African cities leads some people to squat on land they do not own as they seek higher wages available in urban centres.

Natural conservatives, here for a better life. They create the reeking and dangerous mountains of garbage you won't.

The dwellings are sometimes built on land that is marginal or unsafe. 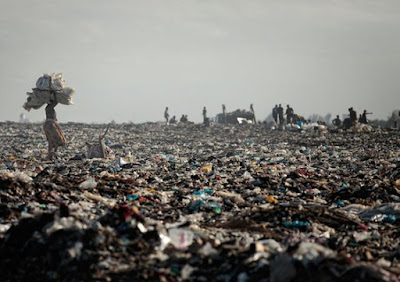