February 06, 2018
The big Liberia Ball cuckold night is over, enjoying cratering ratings as the number of debased Whites willing to watch the sickening jew-produced spectacle continues to decline. For "Green" it was time to celebrate with rioting, fires, car-tipping and insane trust falls. For every other urban area it was time to return to the slow and steady rot devouring everything of value. The season is over, whatever value the running and crashing monsters ever had is gone, it's now time to join the diversity salad dish as a boozed up illegal plows into a Negro Felon League super orc.

Police say a suspected drunk driver struck and killed two people, including a Colts player, standing along I-70 on the west side of Indianapolis Sunday morning.

Just another scene from a rapidly dying country. Say, did you hear the jumping negroes are on the talmudvision? Ready for some "March Madness," shkotzim?

One of victims has been identified as Colts linebacker Edwin Jackson, 26, of Atlanta. He was pronounced dead at the scene.

His smile will never brighten another room, never again will we look at that boy run. This is the cruelest tragedy. 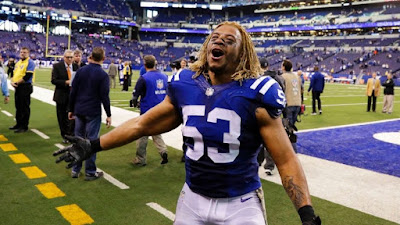 Police believe the victims were standing outside of a passenger car stopped on the side of the interstate when 37-year-old Alex Cabrera Gonsales drove a black Ford F-150 onto the emergency shoulder and struck the rear of the car, as well as the victims.

Time for the "dreamer" to take the wheel. A vehicular Speedy Gonzales act leaves ruined vehicles and mangled nigga bodies (Ah!). They're drinking the alcohol Whites won't, driving while completely in the bag to save your pension, natural conservatives, family values, our Great Ally Israel...

According to police, Gonzales fled the scene on foot, but the trooper who discovered the crash apprehended him shortly after on the ramp to Holt Rd.
Don't worry, all humans are the same and our magical constitution will turn the worthless invaders into responsible citizens who inhale tequila, drive, kill their fellow genetic inferiors and then make a run for the border but are fortunately captured because a bloated sawed-off meat sack of demographic destruction isn't well suited for electricity on wheels open field speed, unlike the morlock it killed. 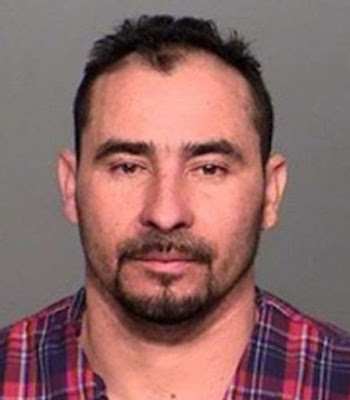 Police believe Gonsales was intoxicated and was driving without a license. He was transported to the Marion County Jail. Toxicology results are pending.


You know what? I think you might be right!

Jackson was placed on IR this year before the season started, but played in every game during the 2016 season. He had 8 starts and recorded 66 tackles.


The Colts released the following statement regarding Jackson’s death:

Get ready for harsh words condemning our open border and the foreign scumbags flooding into our nation! Just kidding, it's the usual saccharine drivel.

We were heartbroken to hear the news of Edwin Jackson’s passing. Edwin was loved by all in the Colts organization. We admired his outgoing personality, competitive spirit and hard-working mentality. He was well-respected among all with whom he crossed paths, and he will be greatly missed in our locker room and throughout our entire organization."

My thoughts and prayers are with the victims of [may-hee-can drunk driving]. This is a horrible tragedy. If we learn any lessons from this we dishonor their memory. We must continue as if nothing happened. [A boozed up illegal alien plowing into you] is a part of life in the city and something we have to get used to. My biggest fear is a backlash from "racists" against the many innocent [Mexicans]. I trust you all have your candles lit. Let's have a song. "Wrist icicle, ride dick bicycle."
Full Story. 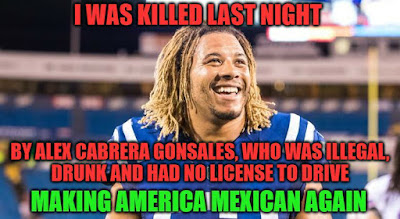