Everyone Here is a Person

February 26, 2018
There are only two types of human units: consumers and potential consumers. The more you have the better. They'll "pump" money into muh GDP, do the jobs you won't do, save your pension, shine your shoes and pick your cotton. We have a vital race for the maximum amount of brown outsiders to win and we must make this transformation for our very survival. These truths are self-evident, as witnessed by their popularity in White countries and only White countries. Back in Israel, the World's Best Nation filled with chosen light-bringers, a very strange contrast is being witnessed. For some reason, no doubt somehow linked to incredible altruism, the jew wants the African invader out and doesn't really care about the nearly limitless potential of the tar horde. Oh well, I guess the rules are different for them, they are chosen by g*d, unlike all of us, after all.

More than 20,000 African asylum seekers and Israelis demonstrated next to the New Central Bus Station in south Tel Aviv on Saturday night, in protest of the government’s plan to deport the asylum seekers, which is set to begin in March.

Animals from a nightmare take to the streets in the "holy land" demanding suicidal compassion from an ethnostate that is not interested in the least. What do you simians think this is, Europe?

“We didn’t choose to come to south Tel Aviv, they didn’t hand out maps to Levinsky Street in the Sinai desert,” Togod Omer, an asylum seeker from Darfur, Sudan, said as he addressed the thousands of people from the stage.

The foreign invader never has any personal agency, they're just poor, highly virtuous unfortunates swept along by the cruel waves of fate until suddenly they're moving in next door. There were no maps in a desert. We should be allowed to stay. This is a logical argument.

“We are all victims in this story, both the asylum seekers and the veteran Israelis,” Omer continued, in reference to those living in Tel Aviv’s southern neighborhoods. “We’re all living here together and they are always trying to get us to hate one another.”

I wonder who "they" are, exactly? Certainly the traveling merchant isn't happy with a pathological mass of protoplasm somehow oozing under their Hate Wall, while the moronic opportunism of the spear tosser is unlikely to win many friends. I guess the question is how can we blame jew tribalism and African savagery on White "racism?" 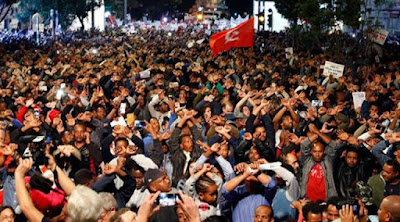 Your order of schwoogie failure has arrived.

Thousands of people filled Levinsky street chanting “the people demand a stop to the deportations!” with signs quoting Jewish texts about loving the stranger.

Let's check the talmud for some "love the stranger" text: "We beg Thee, O Lord, indict Thy wrath on the nations not believing in Thee, and not calling on Thy name. Let down Thy wrath on them and inflict them with Thy wrath. Drive them away in Thy wrath and crush them into pieces. Take away, O Lord, all bone from them. In a moment indict all disbelievers. Destroy in a moment all foes of Thy nation. Draw out with the root, disperse and ruin unworthy nations. Destroy them! Destroy them immediately, in this very moment!"


There are approximately 38,000 African asylum seekers in Israel, according to the Interior Ministry. About 72 percent are Eritrean and 20% are Sudanese.

The exciting "diversity" of foreign invasion. This is a transformation Israel must make. We may see a rise in anti-gentile sentiment because we'll be at the center of calling out the massive hypocrisy.


A law approved by the Knesset in December stipulates that the Interior Ministry will deport asylum seekers to Rwanda and Uganda starting in March.

It's not "racist" or "xenophobic" because my entire family went up a chimney and I manipulate global currencies.


“I’m happy that so many people came, and there are so many people who are helping us,” said Saleh, 24, an Eritrean asylum seeker who came from Haifa with a group of friends. “I’m a person just like everyone here is a person, and we all come from the same God.”

I'm sure the poisonous mushroom will agree with this "we all be human" drivel. Let's check that "holy" text again: "All Israelites will have a part in the future world...the goyim, at the end of the world will be handed over to the angel Duma and sent down to hell."


About 150 counter-demonstrators were cordoned off to an area a block away from the main protest. They held signs that said “Liars, go home!” with pictures of planes, referring to the planned deportations.

The conscience of humanity.

“I was born and lived my whole life in the Shapira neighborhood, and we’ve been suffering from this violence for years,” said Reuven Mirayev, a lawyer. “I can’t go out at night, as soon as it gets dark, my daughters have to come home.”

Oy vey, it's so dark and such small portions. 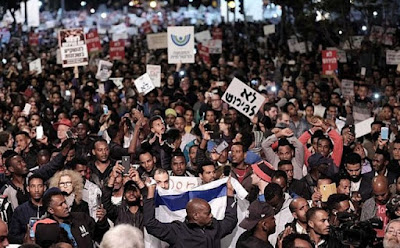