February 01, 2018
The main difference between moderate and radical islam is that the radical moon cultist will die during the attack on the slumbering White population while the moderate will attempt to flee after killing the kuffir, deciding to pass on a free ticket to an eternity of bliss for reasons that are difficult to comprehend. On the other hand, these moderates give us a chance to explore the moose-limb invader pathology more closely and struggle to figure out why it murdered its weak and cowardly benefactors. Naturally, there's no better place to start than Sweden. It's time to have a lengthy trial for a moon cultist that drove down an undocumented highway and struggle mightily to discern what prompted this memory hole attack on the same people that cheered the arrival of this worthless sand monster.

The man who mowed down pedestrians with a truck, killing five people, in Stockholm last April wanted to punish Sweden for its part in the global fight against radical group Islamic State, prosecutors said in charges filed on Tuesday.

Well, now I've heard everything. Are you sure? It just seems amazing that after "doing the right thing" and allowing our homeland to be destroyed by columns of fighting age males acting as biological weapons for the jew, moe-ham-head would turn around and "punish" the cloying sanctimony of a nation that lost its mind and soul. Now you're telling me this rock worshiper was a terrorist? This is clearly an isolated incident that will never happen again. We all know these are "women and children" fleeing "war," a professional semitic liar said so. They're going to save our pensions and do the jobs we won't. Here comes the truck. Get under the wheels, goyim.

Uzbek-born Rakhmat Akilov, who was on the run from Swedish authorities after his asylum application was turned down, said in online conversations cited by the prosecutor that he wanted to “run over unbelievers”.

Apparently there are mahound cultists so completely devoid of any value that even Swedenistan doesn't want them. We'll ask this dangerous animal to leave under the old honor system. I'm sure the enemygrant will meekly comply. Every religion is the same and just as good, after all (jews are g*d's chosen and better than you). They all preach incredible ethical teachings like "be nice," so I'm sure we can just politely ask the army of allah to leave and they'll do it out of respect for their fellow cattle. 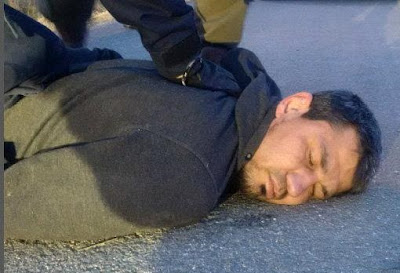 “His motive is that he wanted to punish Sweden because we are part of the global coalition against IS,” Deputy Chief Prosecutor Hans Ihrman of the National Security Unit told a news conference.

There's nothing to see here and there's no planned kosher demolition of your ancestral lands, that's for sure.


Akilov’s lawyer Jonas Eriksson said his client admitted to the charge of committing a terrorist act and confirmed the motive. He declined to say whether Akilov had expressed regret for the attack.

We can only assume this noble savage is all busted up about its carefully planned massacre of the wicked unbelievers.


On April 7 last year, Akilov hijacked a beer truck outside a restaurant in central Stockholm and sped some 500 meters (yards) down a pedestrian street, ploughing into shoppers before crashing the truck into a department store.

When the gender balanced degenerate art lions failed to prevent the "spiritual struggle."

He was arrested the same day outside a gas station in a Stockholm suburb after he was recognized from a CCTV picture.

How they were able to determine this specific brown blob was the one they wanted is a minor miracle.

According to Ihrman, Akilov had planned his attack for months and had investigated a number of possible targets, including gay clubs and ferries.

We were very successful in integrating the snake idol slave and teaching it muh values, like destroying your rectum with household objects.

Akilov had asked in online conversations for practical advice on building a bomb and for spiritual guidance ahead of a “martyr operation”, the charges filed with a Stockholm court alleged.
This is more proof that all "extreme right wing" White voices need to be removed from the internet via jewish censorship.

Sweden has not fought in a war in more than 200 years and is not part of NATO, but has taken part in international peacekeeping missions in places like Mali, Afghanistan, Iraq and Kosovo.

A war does not require mutual consent.

It has also sent 70 instructors to aid Iraqi forces in their fight against IS as part of a U.S.-led operation.
Thank you for your pitiful contribution to this disastrous quagmire. 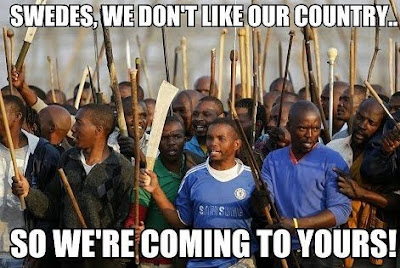