February 19, 2018
If Europe has a reason for optimism, it's in the Visegrád group. In fact, it would be fair to say that our ancestral homelands can be divided almost evenly into the rapidly dying West and the resisting East. In Hungary the "immigration" shotgun and the jewish demand to "put this in your mouth" have been rejected and there's no sign of a reversal. Instead, it's time for real talk from a European leader condemning the kosher spiritual sickness, the rapefugee invasion columns and the cowards who were afraid of being called names.

Hungarian leader Viktor Orban called on Sunday for a global alliance against migration as his right-wing populist Fidesz party began campaigning for an April 8 election in which it is expected to win a third consecutive landslide victory.

You can't build a future with other people's children. Invisible lines are not what makes a nation: it's shared religion, culture, tradition and race. A brown horde of unskilled workers and welfare colonists is not going to save muh economy. The "immigrant" will also get old and need care. You might think these observations are obvious, perhaps even insultingly so, but try telling them to a Frenchman as the strident call to prayer blares out of rusted speakers and dark aliens mill about, glaring at their benefactors with sullen hostility and seeking victims.

Popular at home but increasingly at odds politically and economically with mainstream European Union peers, Orban has thrived on external controversy, including repeated clashes with Brussels and lately the United Nations.

Controversy like "I don't want my homeland to die." These crazy extreme-right ideas are, for some reason, extremely popular with healthy Whites. Meanwhile, semitic globalist bodies extend their venomous tentacles toward the last remaining White nations. They want us completely destroyed. Even "hated minority in your own country" isn't enough for the jew. They want White genocide.

Those conflicts, mostly centered on migration since people fleeing war and poverty in the Middle East and Africa flooded into Europe in 2015, have intensified as the elections approach and Orban poses as a savior of Europe's Christian nations.

That "war" in Syria is absolutely everywhere: Eritrea, Bangladesh, Nigeria, Pakistan, Algeria, Afghanistan and pretty much any other non-White shithole country. Don't forget muh poverty. Europe must become the soup kitchen of the world. It's the right thing to do. Take the entire population of Africa and move it in, we'll transmute every last 60 I.Q. savage enemygrant into a computer programmer or whatever.

"Christianity is Europe's last hope," Orban told an audience of party faithful at the foot of the Royal Castle in Budapest. With mass immigration, especially from Africa, "our worst nightmares can come true. The West falls as it fails to see Europe being overrun."

Healthy spirituality and the restoration of our traditions and ancestral memory is our most potent weapon against the evils that were unleashed during the disastrous jewish century. We must reject the materialism, the atomization, the necrotic "We are all equal" slush that replaced moral imperatives. Suicide is a sin, not a virtue. Hold back the dark nightmare. Europe Awake. 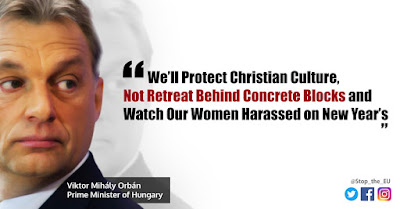 To achieve that and hold onto power the prime minister, 54, has used methods that critics have called authoritarian, and picked fights with EU partners, especially in the West. Eastern leaders, most notably in Poland, have followed his lead.

Oy vey, the authoritarian personality! This is another Hitler! Don't listen to him, cattle! The precious six million...

Orban said on Sunday that Europe faces a critical fissure between nation states of the East and the West, which he called an "immigrant zone, a mixed population world that heads in a direction different from ours".

A direction of violence, savagery, child-rape, burning cities, ignorance and death or the restored nations of our ancestors? Which way, Europe?

"Absurd as it may sound the danger we face comes from the West, from politicians in Brussels, Berlin and Paris," Orban said to loud applause. "Of course we will fight, and use ever stronger legal tools. The first is our 'Stop Soros' law."

The hero we need.

The Hungarian leader has advocated "ethnic homogeneity" and compared Soros, a Jew, to a puppet master unleashing immigration onto Europe to undermine its cultural and economic integrity.

Wealthy alien nation-wrecker working to undermine and destroy from within is also a jew. I know, surprising.

A defining moment of his premiership came in 2015, as the migrant crisis peaked: he built a double razor wire fence that became the symbol of anti-migrant sentiment in Europe.

It's neither big nor beautiful, Turkey didn't pay for it, but it gets the job done quite well.

"Soros has antagonized not only us but also England, President Trump and Israel too," he said. "Everywhere he wants to get migration accepted. It won't work. We are not alone and we will fight together ... and we will succeed."

"We don't think the fight is hopeless, on the contrary, we are winning," Orban said. "The V4 is firm, Croatia has come around, Austria has turned in the patriotic direction, and in Bavaria the CSU has created a resistance."

Victory or complete destruction, these are the choices. 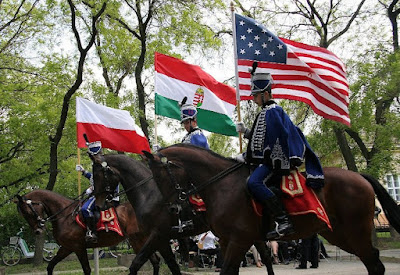