February 28, 2018
I think I can safely say that today's story is the most important and disgusting news item you'll see this year, even bigger than Muh Russia "hacking" the election or the time an AK-15 jumped up and shot the innocent babies in Florida. Yes, this latest dispatch from the front, where we are bending the long arc of history slowly toward justice, is even bigger, even more shocking. I hope you're sitting down. If you have a heart condition don't read any further. If you are pregnant or may become pregnant (Hopefully not with White children!) you should not witness this. Parental discretion is advised. Trigger warning: pure unfiltered evil.

Still here? Okay, I'll give it to you straight: someone doodled a swastika on a dry-erase board at the communist indoctrination center. I know, if anything I undersold the significance and horror.

On Monday February 26, 2018 at 6:07 p.m. President Kathy Murray sent an email alerting the Whitman Community that a swastika had been discovered on dry-erase board in a Penrose Library study room Monday morning.

The nawrtzees are invading our tiny liberal arts college! The horror, the horror! The next Hitler is paying an outrageous amount in private school student loan debt so he can spread his message of hate, one vile scribble at a time.

Murray reported that the swastika was erased soon after discovery.

I spent eight hours talking to Sanjay Gupta at tech support in Bombay, reinstalled Windows and then had experimental eye surgery because I couldn't see the pictures. Wait, there aren't any? Erased almost immediately? Well, that sure is convenient. Now we'll never know how badly made this symbol of "hate" actually was.

“To say this kind of writing is highly inappropriate is an understatement,” Murray wrote in her email. “I want to be very clear: recreating this symbol of hate is reprehensible and behavior like this has no place within the Whitman community.”

Sinecure scumbag is forced to do something besides posing for "diversity" photos and issuing statements calling for fewer Whites in everything. This "writing" of Hindu good luck symbols is the worst thing in the world. Our thoughts and prayers are with the one or two people who may have seen it before it was easily removed. You "racists" have no place here in our kosher mind-washing facility, just like any gentile who can't afford the estimated $44,800 pound of flesh in tuition and fees.

As of now, no information has been released about who drew the swastika.

Call the FBI! This is much more important than some mexi-jew mystery meat who keeps threatening its former high school, trust me. 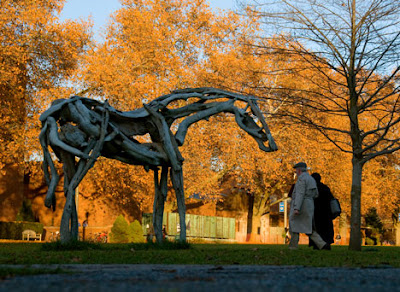 “We are unsure if this act was committed by someone who is part of the Whitman community or not and have spent the afternoon trying to determine who is responsible,” Murray wrote.
Time well spent, that's for sure. It's not like you have anything better to do.


“It is my sincere hope that this is an isolated incident,” she added.

Isolated incident, random phony hate crime, good boy turning his life around, about to go to college and stop with all the Hitlerism.

This is not the first time white-supremacist propaganda has been discovered in Penrose, however. 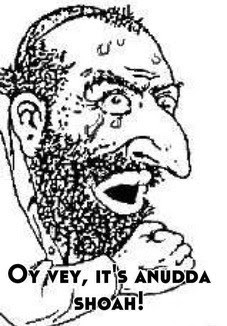 Last fall, The Wire reported that white nationalist flyers were discovered between the pages of several books at the library.

This is the best place for your White Nationalist flyers. Within the covers of a book you can be sure it won't be found by a negro or la-teen-oh.

Additionally, The Chronicle of Higher Education recently reported on data released by the U.S. Department of Education and the Federal Bureau of Investigation that reveals an upsurge of hate crimes on college campuses in the aftermath of the 2016 Presidential Election.

Data released by the Witchfinder General and the Holy Inquisition reveals an upsurge in spectral attacks and the evil eye in the aftermath of the poor harvest of 1616.

I'm going to need extensive counseling after this waking nightmare.

Editor’s note Tuesday February 27, 10:10 a.m.: According to an article published today by Inside Higher Ed, the Anti-Defamation League reported that 2017 saw an 89% increase in anti-Semitic incidents on college campuses from 2016.

Phony hate crimes more common than ever, declares a jew with paint-covered hands. 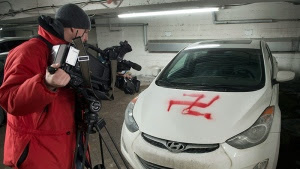