Welcome to Germanistan, a country that was brutalized and left for dead during the disastrous jewish century and has been passively absorbing the kosher punishments ever since. Recently, some signs of nationalist sanity appeared in Chemnitz, taking the form of "far-right extremists" who, for some bizarre reason, don't want their ancient homeland to be transformed into a combination of Africa and a moose-limb caliphate. These horrible "not-sees" are reluctant to die for the jew, this is the worst "hate" I've ever seen. Fortunately, a Soros rent-a-mob featuring the gelded, cucked and anally available "majority" has hit the streets to demonstrate that we're still climbing into the grave of spiritual sickness, weakness and foreign invasion.

We see footage of free-range future victims marching in Hamburg, their faces displaying the blissful delusion usually seen in lobotomy patients. Everything is fine, a million sand monsters a year is perfectly reasonable for a country the size of Texas. They're flying various globalist and ass-bandit flags (the stone cube cult is going to fine with your backdoor deliveries, don't worry) while the German flag is notably absent. It's probably "racist" and should be eliminated in favor of something that communicates our true national values, namely having our rectum annihilated. 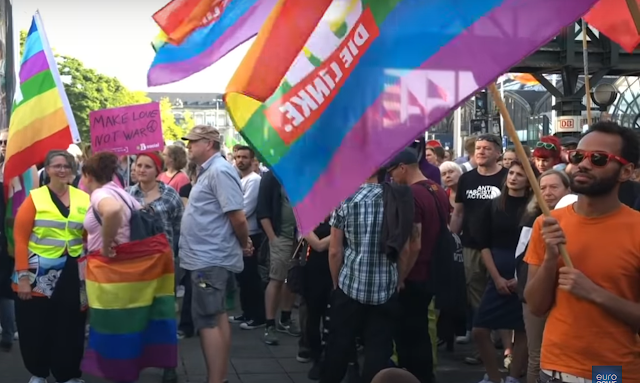 It's time to talk to a useful idiot, who is worried about the rise of nawrtzee ideology in a nation that can't even defend its own borders or prevent semitic saboteurs from controlling the government. Yes, when I think about the return of "extremism" I immediately think of beaten-down and thoroughly demoralized Teutons. Also, we must prove we are a strong democracy. Muh democracy. It has something to do with young Whites killing each other followed by your criminal rulers importing a brown horde to cancel out your little vote. Truly, this is the best system. You voted that you didn't want to be brutally murdered, but moe-ham-head and another moe-ham-head, who are just as German as you are, maybe more, voted "yes," so let's raise that chin for the scimitar.

Time to hear from a young lady eager to display the rich harvest of her four years in Room 101 at the communist indoctrination center. We must prove we are multi-culti. This is what Germany stands for, we've always been a dumping ground for radical islam and African sewage. I wonder what her terrible future holds on this current trajectory. "Found dead in a field," seems most likely. Oh well, at least we have footage proving you're not "racist" that we can play at the funeral before lowering whatever is left into the cold, uncaring ground. Did I mention how good the food is? 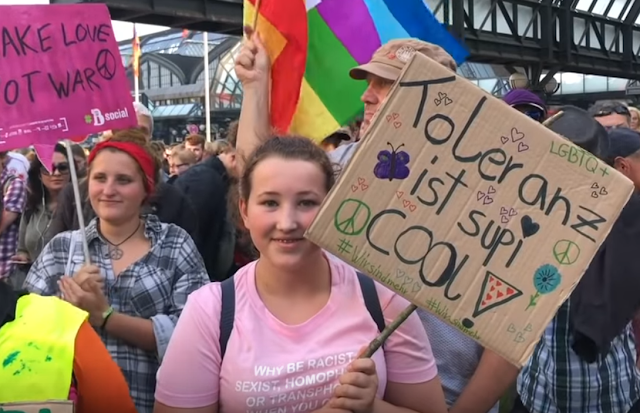 Yay, tolerance! I'm sure the coming sharia government will respect my perversions.

From the doomed useful idiots we cut to the Nationalists. Suffice it to say, it's a night and day difference in terms of spiritual health, strength, facial aesthetics, etc. Even with this footage deliberately chosen to make them look bad, it's still hard to believe any sane individual would look at these two rallies and not immediately be sympathetic to the normal outraged Germans and appalled by the weak and decadent Eloi opposing them. It's explained that the fatal stabbing of a German man was "blamed" on two "immigrants." Yes, must be more of that lynch law and scapegoating. I'm sure the enemygrant scum are totally innocent.


Back to the "decent majority," now represented by antifa scum. No, really. This is the conscience of your rapidly dying land: an unwashed scrawny communist living in a fantasy world, hiding behind a mask and plotting violence against anyone who disagrees with national suicide. Truly, these are the best of us. Meanwhile, the Nationalists held a small rally, and, big surprise, were completely orderly despite a massive police presence. The open border is discussed. Wake up, Germany. There's still time to save yourself and turn back the evil kosher tide.

We conclude with assurances that the indigenous people who don't want their country destroyed are a tiny minority, communist victory is a certainty and the jew will be at the center of this process. Nothing you can do, gentiles. This is disgusting fake news. 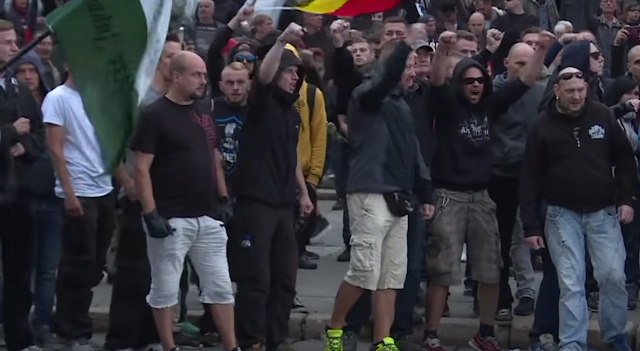