February 08, 2019
Long before the "isolated incidents" and "robberies gone wrong" begin, quality of life is always the first casualty of "diversity." The worthless brown aliens move in, bringing their inability to even maintain a civilized nation, let alone build one, and soon there's garbage everywhere, graffiti, vandalism, noise and general ugliness. This places our wise rulers in an awkward position, forced to either enforce the laws and get called "racist" after arresting nothing but tar monsters or to decide to simply give up and allow a formerly White and healthy area to become Mogadishu. More and more often, this second choice is gaining traction in our dying nation. We don't want to be called mean names by a jewish enemy who wants us to die in pain, after all. Consider this article on "fare evasion" by a jew named "David Zipper" (no, really) and the amazing semitic solution provided to resolving the problems arising from the content of their character.

It may sound strange, but the esoteric topic of fare collection has become one of the most polarizing in public transportation.

This might be the worst opening sentence to an article about public policy ever written. Yes, the idea of "pay for the ride, nigga" is certainly "esoteric" and "polarizing." This is moronic kosher nonsense that doesn't even have the slightest veneer of legitimacy. Just pretend actually paying for goods and services is a controversial topic understood by a very few, it's not like it matters. Did I mention the 74th anniversary of when Europe's second jew-assisted suicide attempt ended and with it the horror of the holohoax and we've got record low la-teen-oh unemployment...

And it’s likely to get worse—unless we start rethinking the idea of transit fares entirely.

If there's a safe bet in 2019 America, it's "things will get worse." As our country gets darker, dumber and more criminal, we're going to have to "rethink" a lot of institutions that functioned perfectly when our ancestral homeland was White and sane.

The controversy has focused on penalties for those who do not pay for their transit trip, thereby committing “fare evasion.” Punishment can be stiff: in the District of Columbia fare evaders on the local transit system, Metro, could get a $300 fine and 10 days in jail.

Wow, we're practically chopping off dark paws, here. Ten days of free food and housing or enough shekels to purchase a nice new pair of burglar boots, assuming the judge goes nuts and hands out the maximum sentence to the good boy about to turn its life around. We better get rid of our laws; they're proving embarrassing to our delusional and ever-shifting piety.

That’s hard to square that with a comparably light $30 fine for an expired parking meter in the District of Columbia—especially since transit riders are more likely to be minorities or have incomes below $15,000 than the general population.

How about some false equivalency? Don't forget, Barkevious here is "poor," barely receiving enough Danegeld hand-outs to afford necessities like taking a subway into a White area where it can commit crimes against slumbering free-range victims.

According to the Washington Lawyers’ Committee for Civil Rights and Urban Affairs, 91 percent of summons for fare evasion in the District between January 2016 and February 2018 were issued to African-Americans.

Rosa Parks would be proud. Since we're all equal, this unsurprising statistic is proof you're a "bigot" and the basic expectations of civilization which represent no burden whatsoever to anyone with a triple digit I.Q. are actually deeply "races" and emblematic of "White privilege." 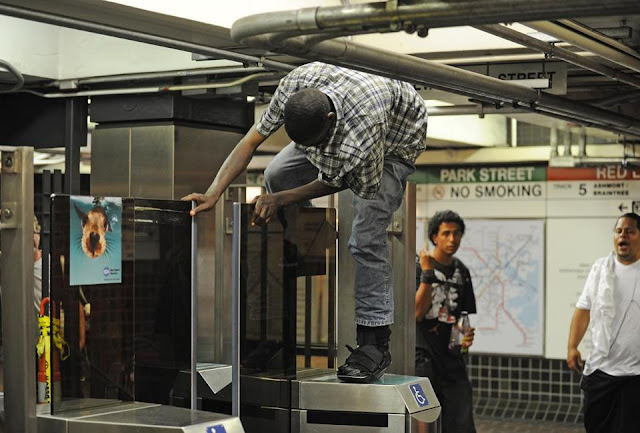 A natural solution would be to remove the risk of jail time and slash the fine for fare evasion, something that the District of Columbia’s City Council voted to do in November by an 11 to two margin despite Metro’s warning that the bill would “have significant safety and financial consequences for the region.”

The natural solution. I mean, it's just logical. Let the negro run wild.


The agency claimed to lose $25 million annually from fare evasion, and that it would be “unfair” to let fare evaders get away with bad behavior.

Considering we're about to dump 100 billion shekels into the reeking privy that is the "African-American," it hardly seems like a big deal. Besides, it's wrong to arrest the nightmare animal. We need more prison amnesty. We're reuniting families.


Mayor Muriel Bowser vetoed the bill on January 16th, prompting the ACLU to declare itself “appalled” by the mayor’s decision. On January 22nd City Council voted 10 to two to override the mayor’s veto, much to Metro’s frustration.

How absolutely dare you! Luckily, dark hominids installed by racial headcounts reversed this appalling explosion of White (Bowser is a negress) original sin.


You might think that replacing turnstiles with an honor system for fare collection would resolve these civil rights tensions, but that’s not the case.

Putt dat wash-tin up in datt bitch, Barkevious. We don't want to ruin the honor system.


But POP systems also draw accusations of racial bias in enforcement by the spot-checking transit employees. Transit agencies in Cleveland and Portland have both been sued on racial discriminatory grounds, with judges suggesting POP enforcement policies could be unconstitutional.

Welcome to clown world, where attempting to make a tar monster pay its way is both "discriminatory" and "unconstitutional." Clearly the moose-limb women who founded our country were deeply concerned about the right of the living fossil to defraud mass transit money pits.


For an outside-the-box pathway out of this conundrum, consider the tiny Chapel Hill Transit agency in North Carolina, which will never risk discrimination in fare-evasion enforcement. Why? Because it makes transit completely free to all riders in order to encourage transit-oriented living.

...and by "free" we mean the shrinking number of White tax-paying suckers will be expected to foot the bill, of course. Here, let me take some of the money from your awful and demeaning job so we can move genetic aliens around for some reason.


The idea of free public transportation isn’t as crazy as it may sound. Prompted by concerns over congestion and pollution, the European countries of Estonia and Luxembourg already offer it, and Germany is considering it.

We can all agree that rotting ghettos carpet-bombed by typical negro behavior and Luxembourg have a lot in common. Maybe not, but just wait a few years, right? How many million "women and children" fleeing "war" should we put you down for?

Tallinn is also shockingly lacking in negro and la-teen-oh garbage, but we'll ignore that part.


Making transit free would require money—but perhaps not as much as you’d think. American transit agencies overall get barely more than a third of their operating revenue from fares, and for smaller agencies like Cleveland’s that ratio is often around a fifth.

It's already a bad system, so let's make it even worse. 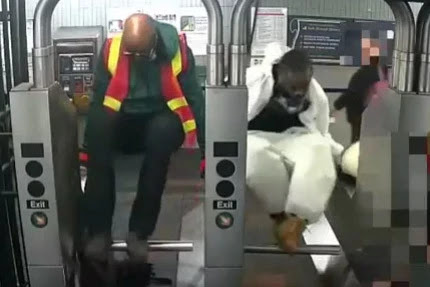