July 24, 2020
All people are equal (Whites bad, jews chosen). Race is only skin color determined by climate and probably not even that (Whites need to be severely punished for existing, the jew is g*d's favorite). The reason the "African-American" keeps failing so miserably is because several decades of groveling, paying, bleeding and making excuses for this failed branch of humanity isn't sufficient. Still, the next offensive against reality is sure to be the one that finally changes the non-human genetics found in the tar monster. The kosher biological weapons are getting better, you just can't see it yet because of your "racism." The new "community policing on steroids" will bring everything into line and make history, just you wait.

Alyssa Blanchard was so traumatized after being carjacked at gunpoint last week outside her Calumet Heights home that she’s now scared to go outside.

I know it looks bad, but being terrified of the entire world is a small price to pay for all the valuable enrichment provided by the nightmare animal. Besides, it's probably only a matter of time before they break down the front door. If you live anywhere near an urban area you need to stop reading this and move right now. We've reached the stage of White genocide where open violence is being encouraged by every tentacle of globalist zionism.

Chicago police say a group of children, ages 10 to 17, carjacked Blanchard and at least 15 other people since late June — wreaking havoc on Blanchard’s generally peaceful South Side neighborhood.

I think the phrase "generally peaceful" can be tossed on the semitic pile with "justice" and "compassion" and "democracy" and all the other fragments of our language shattered beyond recognition by cultural marxism. "This is a mostly peaceful protest," explains the Fraud News while the city burns in clear view.

“I’m scared to use my garage. I don’t feel safe in my neighborhood,” said Blanchard, an elementary school teacher at Chicago Public Schools.

You would think acting as a zoo keeper in the practice prison would prepare you for the content of their character, but I guess not.

What’s especially painful for Blanchard was seeing her stolen BMW used the next day to carjack a woman in the parking lot of Trinity Hospital, a few blocks from her home, she said.

If only the statue of the abolitionist who died in a disastrous brother war had come down sooner, this could have been prevented. 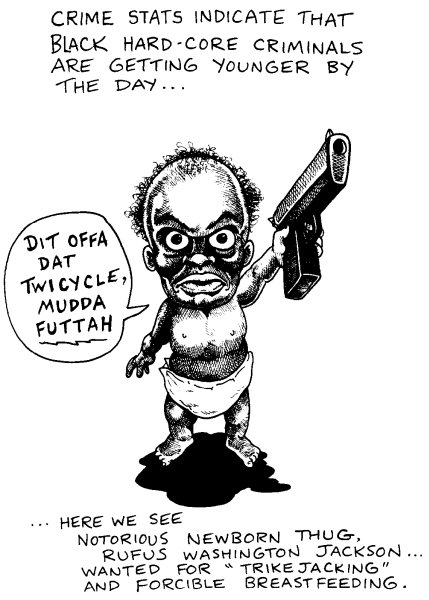 “I don’t want to have to tell my kid about how some young woman was killed or shot with kids using my vehicle. It was traumatizing,” Blanchard, 44, said.

The sort of conversation that only the miracle of decades of jewish demoralization and the Chiraq sewer can produce.

Two children armed with handguns pointed them to her head and ordered her out of her BMW, she said. One child looked as young as 11, she said.

They took her purse, which had about $300 inside, and jumped inside her BMW and rode off, she said.

I bet after we pay "slavery reparations" all of this will abruptly stop and Barkevious will begin approximating human behavior.

Blanchard said police recovered her BMW, which had been crashed a couple days after the carjacking.

On tonight's episode of "Young Bubba Wallace" you won't believe what mischief everyone's favorite "yella" gets into.

Blanchard said she was dismayed to see such young children involved in this type of crime.

It's a real bummer, let me tell you. Most unfortunate.

“I teach this age group and I can’t believe they would do this,” she said.

It is pretty amazing. A young negro committing crimes? Are you sure???

Police published a community alert Sunday evening warning of 14 other carjackings tied to the children. According to the alert, the children are committing the carjackings at a greater frequency, with six carjackings reported just last Saturday.

Just when you thought sitting in your "whip" couldn't get any more dangerous.