My Avocation is Theology


Believe it or not, we're in an election year. I know it's easy to forget, with one candidate hiding in a bunker under the capital from the precious "black lives" he endlessly pandered to and the other hiding in some basement somewhere and emerging only rarely to make senile remarks about "120 million Americans dead from the virus" and so on. Nevertheless, here is the wet-brain pedophile and jew Trojan Horse sharing his semi-coherent opinions on the need for more islam in our publik skools, which should be reopening in five or six years, once you've all been vaccinated into drooling idiocy.

Anyway, the child-sniffing, Corn Pop fighting, Soros fellating sack of doddering shit has something to say and you better listen up, pal. Struggling through the haze of Alzheimer's disease, the kosher candidate thanks me for everything. No problem Joe, I'll keep at it. Squinting like he's looking directly at a nuclear detonation, the proud representative of muh democracy opines that schools really should be teaching his future rape victims a lot more about the moon cult. Juan speaks no English, Barkevious can't read and Johnny gets attacked on a daily basis for being White. Let's learn about sand creatures who worship a giant rock.

It turns out it's a "great confessional faith," whatever that's supposed to mean. Also, the second childhood Senator is actually a master theologian in his copious free time. Well, you did study under the amazing moral genius of the "More needs to be done" mulatto empty suit. Drawing on his extensive knowledge of world religions, the ancient figurehead for semitic evil explains that they're all basically the same. Kill the kuffir, brown slaves promised by the talmud, forgive everyone, it sure blurs together. I can't tell the difference. Every belief is equally good. Whites are bad and need to be destroyed.

After some more anile hot air we finally get the punchline: a million new moose-limb voters ready to vote for the destruction of the country they invaded. Truly counting brown heads is the best political system ever devised. When the donkey bus disgorges its worthless dusky contents at the polling place, you're witnessing the finest tradition of the greatest nation to ever exist. "Muslim-American voices matter!" If Russia invaded, I would welcome them as liberators.

More mumbled nonsense and we're done. Be sure to vote with your "pandemic" mail-in, slave. We'll be really careful to keep an accurate count, don't you worry. All Votes Matter. 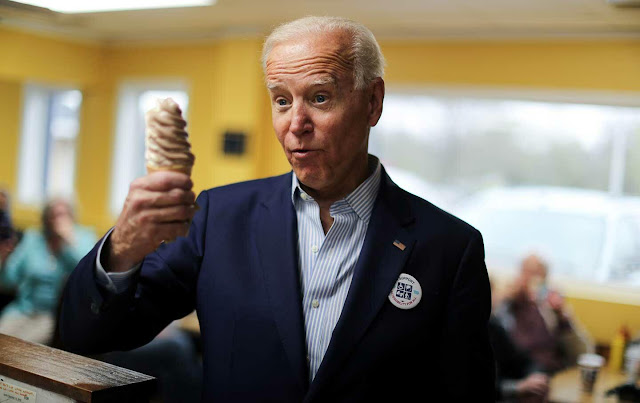