July 28, 2020
Today we're going to revisit a memory hole event that occurred right before our national psychotic break. At the time, which seems about ten years ago, the jewish media was still trying to use the death of an innocent "jogger" at the hands of "racists" to ignite the demoralization powder keg they carefully constructed, but our ancient friends quickly pivoted to a negro criminal who overdosed while in police custody. While this planned demolition was taking place, a story came out about a worthless tar monster who was placed in a Detroit nursing home because it was "sick" from the "pandemic." It promptly used this opportunity to attack elderly Whites and to say there was little national interest in reporting this appalling tale of the content of their character is an understatement on par with saying the jew might not really be our best ally or 2020 has not exactly been kind to muh civic nationalism. The silence of the grave descended as afromania became the newest useful crisis. Finally, I was able to find an update. The victim is dead.

A 75-year-old nursing home resident who was the alleged victim of a videotaped beating in May that made national news died Monday morning, his nephew said.

A future of being a feeble punching bag for primitive inferiors seems downright optimistic in light of recent events, but at the time it was absolutely shocking to the handful of slumbering Whites whose reaction to this hush crime wasn't "I can't hear you, I have a diaper on my face." Preying on the most helpless available victims, we're all equal, the sickening content of their character.

Norman Bledsoe had been depressed and was not eating properly since the May 15 beating at the Westwood Nursing Center in the 16850 block of Schaefer Highway on Detroit's northwest side, his nephew Kevin Bledsoe said.

This reminds me of another forgotten tikkun olam victim named Pat Mahaney who was brutally beaten by "bored teens," never really recovered and ultimately wasted away. If I have any legacy, I want it to be that I kept the memory of these expendable Legacy Americans alive. Every White person should know the name Norman Bledsoe.

"His eating habits went downhill after (the alleged assault), and he lost quite a bit of weight," Kevin Bledsoe said.

Alleged assault. We have vomit-inducing video recorded by the piece of brown excrement responsible. The Minitru said it probably didn't happen and that's good enough for me. Black Lies Matter.

Jaden Hayden, 20, of Ypsilanti faces two counts of assault with intent to do great bodily harm, theft, and two counts of credit card theft in connection with the alleged beating.

This animal is the most precious resource we have. It's worth completely destroying civilization in failed attempts to appease these monsters. Maybe we'll make it do a book report or something, we certainly don't want to punish it because that would be "racist."

Kevin Bledsoe said his uncle suffered four broken fingers, broken ribs and a broken jaw as a result of the attack. 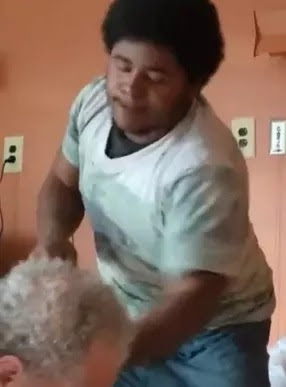 Police also investigated other videos Hayden posted on his YouTube channel that they said appear to show him assaulting other people.

Among the videos that Hayden posted are ones claiming African Americans are the "chosen people," female celebrities are really men and the novel coronavirus is God's punishment for gays and lesbians.

The 70 I.Q. mind and anti-soul of the "African-American" genetic alien.

Because of the COVID-19 emergency, Bledsoe said visitors were kept away from the nursing home where his uncle was staying until last week.

You can't visit your loved ones because of this kosher hoax, but we're going to welcome in shit-colored thugs and look the other way while they're running wild. Total Clown World.

"We finally were able to see him last week," he said. "He wasn't doing very good. I guess there just wasn't anything else they could do for him."

“White privilege--the idea that whiteness, for white Americans, provides an imperishable benefit of the doubt and a flexible and perpetually renewable get-out-of-jail-free card-- is often dismissed by critics and even spoken of by believers in it as an abstract and academic term with no basis of reality. But it doesn't exist without the cultural, social, political, and legal reinforcement that white people's feelings, thoughts, desires, and opinions matter more than the feelings, thoughts, desires, and opinions of non-white people (black people, specifically)."

A phone call made Monday to Midwest Legal Partners, the firm representing the nursing home, was not immediately returned.

In fairness, there is a massive "pandemic" going on that has killed millions, so that probably explains the reluctance to discuss this almost unbelievable dereliction of duty.

Days after the alleged incident, Saif Kasmikha, the firm's managing attorney, released a statement to the media saying Westwood is cooperating with police and that the company's top priority is its residents' safety.

It's a little late for that, moe-ham-head. I'm sure you're really broken up about this man's lonesome death, broken and forgotten in a nation that has gone mad.

On May 21, President Donald Trump tweeted about the incident: "Is this even possible to believe? Can this be for real? Where is this nursing home, how is the victim doing?"

He then got distracted by a butterfly and hasn't mentioned this incident since. As it turns out, the victim died, phony tough guy. I'm sure the record low "African-American" unemployment and our blind obedience to Israel provided comfort in his last agonizing days in a semi-human hell.

Multiple attempts to reach Hayden's family have been unsuccessful, although a man claiming to be his father told Fox 2 Detroit that Hayden had mental problems.

A primitive brain incapable of connecting current actions to future outcomes is definitely a "mental problem." The only sane solution is their removal. We can't share a society with these dangerous inferiors. 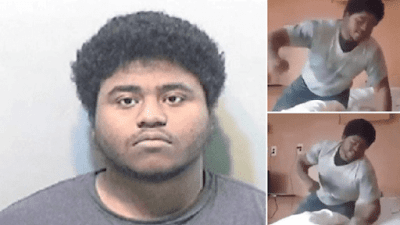 The face of the racial enemy.
Content of Their Character Detroit Jaden T. Hayden Norman Bledsoe Pathology of the American Negro Preying on the Elderly Westwood Nursing Home