July 13, 2020
All lies matter. Whether it's tall tales about how a bitch-cloth will save you from the Kung Flu, Fentanyl Floyd kosher mythologies or the latest explosion of phony hate crimes, it's all very important in the planned jewish demolition of your homeland. You will be forced to agree with all these obvious deceits as a form of ritual humiliation. No one wants to miss out on the crumbs falling off the semitic plate to the dogs below. This slave scarf is keeping me healthy. A criminal negro who overdosed while in police custody is a hero. The monsters are here, spreading horrible "hate" against the innocent genetic aliens. Two and two is five. Just say it, what difference does it make? It's five. We'll destroy your life.

Police investigating racist messages left on a Texas A&M student’s car in June say all available evidence points to it being a hoax.

I know, I was surprised, too. The default assumption in all these incidents should be it's a 70 I.Q. snow job. Nevertheless, there's always a new low-energy trick bag for our jew-controlled media to amplify before quietly putting the revealed hoax down the memory hole.

School officials offered a $1,200 reward on June 25 for any evidence that identified the person who wrote “All lives matter, “You don’t belong here,” and “n—r” messages before leaving them on senior Isaih Martin’s windshield.

The sheet-wearing "racists" are here, spreading vile messages of pure bigotry like "all lives matter." Horrific canards about how every human life is full of special value spew from the misshapen and bloody maw of a "not-see."

A College Station cop who watched surveillance footage from a nearby pool camera say that what they witnessed implicated Mr. Martin himself as the culprit. 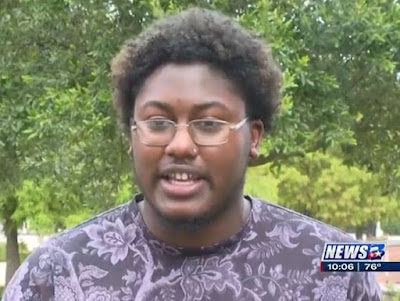 “Martin immediately walks to the passenger side of his vehicle, but does not open any doors,” a local CBS affiliate reported Thursday while citing the department’s report.

Wow, that is pretty weird. Maybe it was afraid it would get the Chiraq treatment if it started sitting in the "whip?" What do you think, Encyclopedia Brown? Please turn to the back of the book for the amazing solution to The Case of the B.L.M. Flimflam.

I know it looks bad, but you have to remember the "African-American" has faced massive "racism" like hiring preferences, generous welfare programs, groveling appeasement, etc.

“[Martin] was the only person with enough time to place the notes on his car,” police added.

We really need to get rid of the police.

For his part, the 21-year-old student told Twitter followers on Thursday that he has “stopped working with the cops” and has consulted an attorney.

This walking bowel movement benefits from and hates Whites, simultaneously. Time to send this  animal back to The Mother where it will be killed and eaten by its fellow not-so-great apes.

“I’m in a predicament where the topic of the case was let’s find out who did this to them pointing the finger at me,” the student wrote.

I'm in a predicament where a cursory examination of the facts exposed my lazy and cynical blood libel against my White benefactors.

“In the end, I stopped talking to them because it seemed they were more interested in me getting the blame for this hate crime instead of finding the actual person who did it.”

Don't worry, we're still looking for the real culprit. The evil "klan" members who love all the children of the world definitely exist.

“Police also asked the county attorney’s office to see if the incident would be considered a false report but were told the case ‘does not meet the elements since Martin did not report a crime,’” the station added.

My red-faced promises to severely punish the vile person without color immediately evaporated when a shit-colored dullard was exposed. 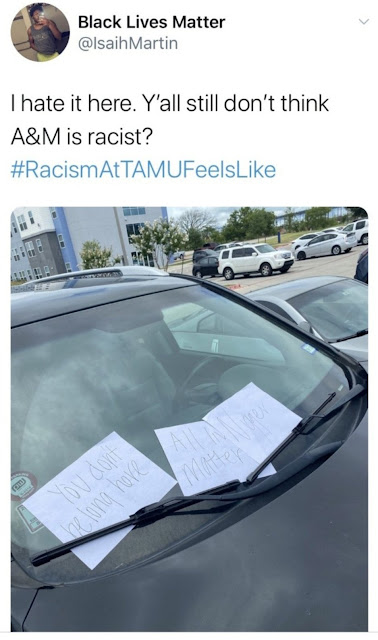