July 23, 2020
One of the benefits of living in a dying nation that has lost its mind, soul and testicles is that there's no longer any ambiguity left. The jewish evil is now completely out in the open and any White person supporting it is beyond redemption. There's no benefit of the doubt left: either you're fighting for the future of our people or you're hoping to be among the last Whites put up against the wall in the planned kosher demolition of our homelands. No one can plausibly claim ignorance. This is where we've been for several weeks, but there's always a new low in the appalling content of their character, as encouraged by semitic demons, to document. If burning down cities, looting, attacking abolitionist statues, hate crime hoaxes, murdering Whites foolish enough to try to reason with the dark mob and generally transforming our urban areas into Mogadishu wasn't enough, how about some violence against a White baby? Welcome to the New Normal, slave. Creatures straight from a nightmare attacking infants. Put on your mask, you're saving lives. By sure to send in your vote in the mail, I'd be amazed if we forget to count it or something.

A 20-year-old Ohio man has been arrested after he was pictured pressing his knee against a crying child's neck in a scene that evokes the slaying of George Floyd in Minneapolis.

By "slaying" I assume you're referring to the drug overdose of a career criminal. Not exactly a great start, Fraud News. Meanwhile, a living fossil targets the most helpless available victim. We're really rushing through those stages of genocide, let me tell you. It seems like only yesterday we were being dehumanized and now, all of sudden, we've got this staggering evil.

Isaiah Jackson was taken into custody by the Clark County Sheriff's Office on a parole violation this week and is facing possible felony charges for the image which circulated on social media with a caption 'BLM now MF', in a reference to the Black Lives Matter Movement.

If you ever thought the Black Lies bowel movement was about anything other than attacks against Whites, I hope this helps. A criminal mulatto abomination uses all 80 points of its I.Q. to communicate the ultimate jewish goal behind the "mostly peaceful" chaos. They want us dead. They're not even bothering to lie about it anymore. 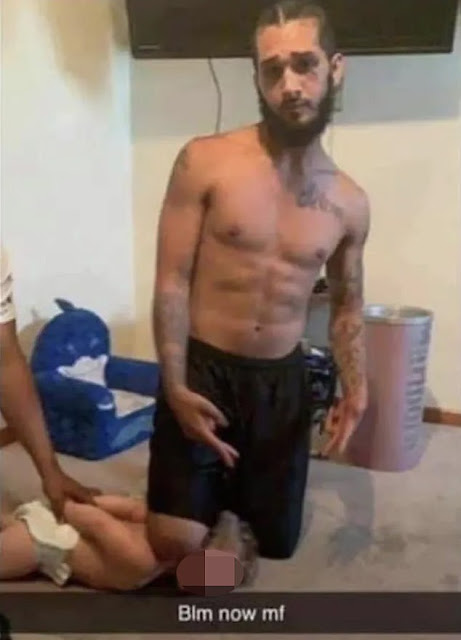 From "tolerance" to this in less than a generation.

Investigators located Jackson Tuesday after they said they were notified about the image circulating online.

You have reached the "racist" police. For English, press one. *Beep* If you are currently being murdered, press one now. Otherwise, please stay on the line and someone should address your concerns in the next few hours.

Officers, who also found the mother with the child when they located Jackson, said she claimed she was not aware of the photo being taken, or what it showed. Cops did not say what her relationship to Jackson was.

She didn't know her mulatto sex monkey was doing this. Seems fairly plausible. As for the relationship, this is just a guess, but I think it might be "totally debased snow hoe."

The Clark County Sheriff's Office reported the incident to local prosecutors, who are currently weighing felony charges against Jackson.

There's a lot of evidence to review. This is a very complicated case involving a creature who is definitely fully human.

Similar images have been posted online, but of people participating in a 'George Floyd challenge', mocking the image of the 46-year-old black father of five when he died during an arrest on Memorial Day.

Take the George Floyd challenge! First, you're going to need to take enough Fentanyl to kill a horse. Next, take this counterfeit bill...

The challenge that emerged on Snapchat showed dozens of teenagers sickeningly mocking the fatal arrest. The participants, who are mostly white males, are seen smiling in the photos and kneeling on the necks of their friends.

Face Crime! You got a license to mock the total madness, sickening hypocrisy and profound ugliness of our dead country?

Jackson's post appears to be a critical response to the challenge, although authorities are still investigating the motive, and who else may be involved.

Yeah. I'm sure that was the thought process in its semi-human mind and not "Eye finnin to hurt diss mudda fuggin milk baybee."

Detectives said they are now 'awaiting the Office of the County Prosecutor to provide a determination on the scope and breadth of the felony charges that will be supported by that office for presentation in court'.

Hey, no hurry. Take all the time you need. 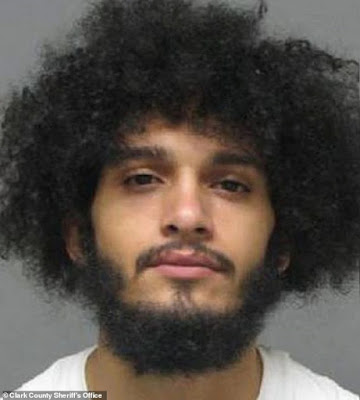