August 21, 2020
Mayor Lori Lightfoot defended the Chicago Police Department’s ban on protesters being able to demonstrate on the block where she lives, telling reporters Thursday that she and her family at times require heightened security because of threats she receives daily.

While Chiraq is pillaged and burned over a completely justified shooting where the negro criminal didn't even have the common courtesy of dying, at least we have our priorities straight. We must protect the cargo cult "family," specifically the dyke bed-death, of an E.T. puppet as imagined by Tim Burton. Slot-licking alien lives matter. Your property, on the other hand, must be destroyed as "slavery reparations" in this latest pathetic eruption of afromania. All dark animals are equal, some much more so.

Lightfoot refused to elaborate on the specific threats, but said she receives them daily against herself, her wife and her home. Comparisons to how the Police Department has protected previous mayors’ homes, such as Rahm Emanuel’s Ravenswood residence, are unfair because “this is a different time like no other,” Lightfoot told reporters.

The same degenerate moron who openly endorsed the looting and rioting now has a problem with it when it shows up on the rug-munching (referring to the frequent cases of domestic violence where dykes smash their partner's face into the floor) doorstep. Sometimes I feel English needs a stronger word than "hypocrisy," which has lost most of its punch from having to be applied to all the endless kosher snow jobs in our dead country. Of course, this is a "different time," with a virus killing millions and a criminal tar monster who overdosed while in police custody undergoing divine ascension. Oh for those halcyon days when the negro pathology was mostly confined to rotting neighborhoods which looked like they'd been carpet-bombed and White genocide and the complete destruction of the civilization we built was communicated with jewish code words instead of being openly demanded.

Your business has been destroyed, you got bludgeoned into a coma by "peaceful protestors," but I'm sure you understand that I'm more important. The mentally sick alien bravely leads from the rear now that it has, at least temporarily, stopped fully endorsing the kosher chaos.

Lightfoot and Chicago police Superintendent David Brown were asked at an unrelated news conference about a Tribune report noting police have banned protesters from demonstrating on her block in the Logan Square neighborhood, ordering officers to arrest anyone who refuses to leave.

Wow, arresting and charging the two-legged locusts actually worked? Maybe we could do this everywhere to stop the planned semitic demolition of a major urban area? I know it sounds crazy, but I'm just throwing out ideas, here. It just might be the answer, who knows? 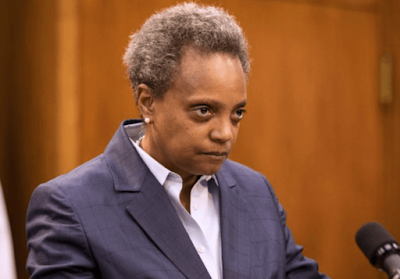 The leadership we deserve.

The directive surfaced in a July email from then-Shakespeare District Cmdr. Melvin Roman to officers under his command.

O brave new world, that has such people in't.

It did not distinguish between the peaceful protesters Lightfoot regularly says she supports and those who might intend to be destructive, but ordered that after a warning is given to demonstrators, “It should be locked down.”

Plot twist: there actually is no difference and the mythology that they aren't all scumbag criminals was just gaslighting from the synagogue in the living room. What if I also told you they aren't evil "White supremacists?" Your eyes hurt because you've never used them before, etc.

But Lightfoot said such comparisons “don’t make any sense,” after Brown referenced the ongoing coronavirus pandemic as well as civil unrest that have flared since the George Floyd killing at the hands of Minneapolis police.

The two big jewish lies of our time. Wear a diaper on your face and goggles, there's a deadly "pandemic." Saint George was killed by "racists" and certainly didn't overdose or anything. People actually believe these lazy deceits.

“I’m not going to make any excuses for the fact that, given the threats I have personally received, given the threats to my home and my family, I’m going to do everything I can to make sure they’re protected,” Lightfoot said. “I make no apologies whatsoever for that.”

The transformation into Liberia is now complete, with a raging civil war and a totally corrupt and inept tribal leader.

Both Lightfoot and Brown noted there are laws on the books banning residential protests, but Brown acknowledged the Police Department does not always enforce them. Brown said the city tries to give “wiggle room” for protesters.

Eroding rule of law, decline and fall. There's probably laws against stealing, burning and killing, but you get "wiggle room" because this disaster advances the interests of the jew plutocrats dreaming of the brown slaves promised by their talmud.

Brown also cited instances where peaceful protests have been “hijacked” by agitators as reason for keeping demonstrators off Lightfoot’s block.

No, really. They honestly expect you to believe this. Just a few bad apples, probably White "racists." Let it all burn.

“We have seen very peaceful First Amendment protests for the most part but embedded in each of those protests have been very violent people. And they’re embedded. They put up umbrellas. And they come for a fight,” Brown said. “So we have to prepare for what we’ve seen.” 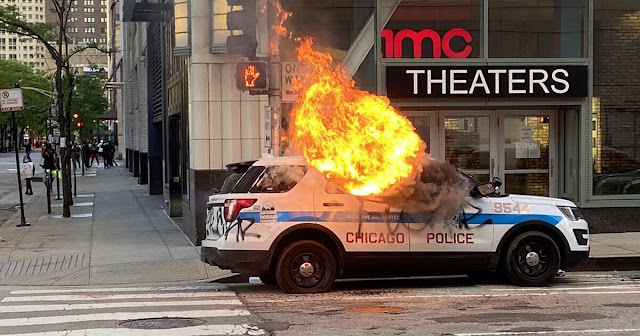