August 18, 2020
We have now reached the stage of jew-engineered White genocide where open violence against us is being encouraged by the educational-industrial complex, the synagogue in the living room and criminals elected by racial headcounts. If "worse is better" delusion still had a leg to stand on, it's long gone. We are vilified and assaulted and the typical White response is cowardice, apathy and repeated bleating about not being "racist." In a few months we're going to install semitic communism by vote fraud and what we're seeing now will seem like the last pleasant days of summer, fondly remembered in the dead of winter. Doing nothing isn't going to work. We're fighting for our right to exist. There will be no flattering eulogy if we fail.

An elderly man cleaning a path in Chicago was the victim of an unprovoked sucker-punch attack.

You probably already guessed the racial component involved here, but you're certainly not going to hear about it in this article. Instead, this appalling example of why the removal of the negro is the only sane solution is treated as some minor curiosity. Now elderly sweepers are getting attacked in Chiraq. Really something, let me tell you.

The police in the city - which is experiencing an increase in violent crime - released the footage of the assault.

It sure is strange how Soros-funded "defaund dem fave oh" terrorism and the spineless response from the people who are supposed to defend civilization from descending into a dark continent all against all led to more violent crime. Honestly, who could have predicted this? We must be really unlucky or something. This is certainly not the planned jewish demolition of a major urban area.

The suspect can be seen attacking the victim before fleeing the scene. The incident is said to have taken place in the middle of the afternoon on July 23.

The Jesse Owens act. This happened nearly a month ago and we're just now hearing about it. I wonder how many similar incidents will never see the light of day, ever. The American Holodomor has begun.

Police tweeted the clip, writing: 'Help Detectives identify the subject seen in this video where a Battery of Senior Citizen occurred on the 100 block of West Jackson Blvd on July 23 approx. 2:50PM.'

Please "snitch" on a brown inferior who looks like nearly every poorly-formed negro animal you encounter in the rotting zoo that once was a prosperous city so we can give it a book report.

The clip begins with the cleaner making his way across the path with his broom. A passing man, who is seen wearing a white tank top, blue shorts and blue shoes, then punches him.

The White man improves, the negro destroys. We're not equal. We have nothing in common. Pretending the living fossil is human in any meaningful sense is the folly of our time. They need to be removed. 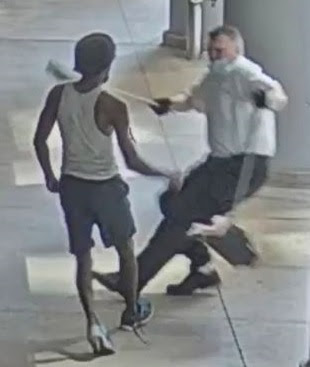 There does not appear to have been any words exchanged between the two men.

You have to assume every "African-American" you encounter is planning to attack. The primitive and violent mind, further provoked by semitic libels against our people, can not be reasoned with. You need to be armed. You need to get out of the "black" areas and organize with other Whites.


Police have not released any information on the condition of the victim following the attack or his identity.

He's hurt or dead or something. Honestly, who knows?

I know it looks bad, but "racism" accusations are down 3%, we convinced a handful of Eloi to turn in their "assault weapons" and the new community policing idea looks extremely promising.

Donald Trump has previously threatened to send in federal agents to help bring crime under control.

It's a little late for that, phony tough guy. Now we're going to need a bunker-busting nuclear missile.


Hundreds of people last week descended on downtown Chicago early Monday following a police shooting on the city’s South Side.


And Chicago's police superintendent was forced to defend his officers' actions during weekend clashes with protesters.

If we're being shot at by a criminal tar monster we're allowed to shoot back, etc. 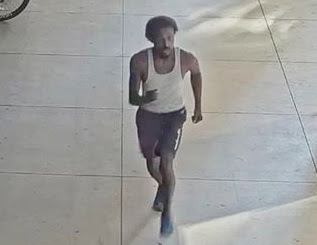 We're trying to identify this "jogger."
Chicago Chiraq Decline and Fall Knockout Game Midwest Mogadishu No Arrests Were Made Pathology of the American Negro White Genocide