August 06, 2020
It's come to this: Kindergarten Cop, a banal 1990 comedy-action movie starring Arnold Schwarzenegger as a police detective who masquerades as a teacher, has been canceled and likened to the explicitly racist silent film Birth of a Nation.

I have a headache and it's definitely not a tumor. Instead it's the pain of living in a doomed country that has completely lost its mind following the kung flu hoax and jew-guided afromania. They're walking all over me.

Don't even get us started on that "boys have a penis" line.

It's like we told the communists the title of this trite jewish bowel movement and no other details and they just filled it in on their own. Apparently, it's a dystopian story about a merciless badge thug arresting kindergarten moppets before they become mature enough to be a real problem. You ate some paste, you're going to prison.

It's true Kindergarten Cop is only a movie. So are Birth of a Nation and Gone With the Wind, but we recognize films like those are not 'good family fun.'…They are relics of how pop culture feeds racist assumptions.

Who is your Daddy and what does he do? The little jew with the giant eraser, removing the past, getting rid of offensive fiction and Thought Crime from the past. We'll make it all disappear. It's worth it to complete a failed attempt to appease a negro animal that's completely incompatible with a civilized nation. 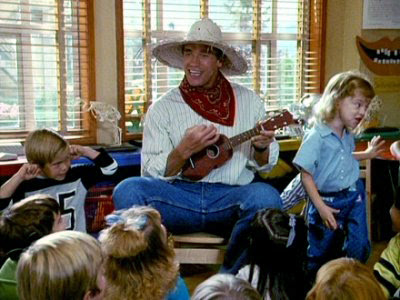 Because despite what the movie shows…in reality, schools don't transform cops. Cops transform schools, and in an extremely detrimental way.

Once we've completely eliminated the "racist" pigs I'm sure we'll see an immediate improvement in our publik skools.

Kindergarten Cop has been replaced by a second showing of John Lewis: Good Trouble, a documentary about the recently deceased congressman and civil rights leader.

Marvel at the amazing achievements of a negro idiot who knew Reverend Doctor Saint Malfing Luffah Kang June-yah and served as a cultural marxist potted plant in congress for what seemed like an eternity.

It's a good thing that "cancel culture" doesn't exist or otherwise this would be deeply disturbing, wouldn't it?

Yes sir, let me tell you. Haw, haw, haw! Those goofy liberals sure are dumb...as they win one victory after another while we meekly submit to the semitic insanity.

Trigger warning: Here's the trailer for Kindergarten Cop, which has been called (accurately, in my view) "too grim for children and too cloying for adults" by the folks at Rotten Tomatoes.

This jewish joint has something for absolutely no one, you're going to love it!