September 09, 2020
White people are bad. They are the reason for all the endless failures of our "multi-culti" zoo and deserve the coming kosher genocide. To make things better, decrease the number of Whites involved. They're also the biggest terrorist threat to our otherwise harmonious globalist bodega. We're honestly expected to believe this jewish drivel. What are you going to trust, our greatest ally or your lying eyes? It seems a pretty obvious choice, but then I went outside and saw Eloi staggering around with face diapers because the sky is falling. "Doing this humiliating thing will prevent conflict" has got to be the biggest weakness of most Whites in our dying country. On the other hand, here's a highly corrupt and inept deep state tentacle to explain why evil pale people are the reason the windmill collapsed.

White supremacists will remain the most "persistent and lethal threat" in the United States through 2021, according to Department of Homeland Security draft documents.

Thanks merchant, you're my best friend.

The most recent draft report predicts an "elevated threat environment at least through" early next year, concluding that some U.S.-based violent extremists have capitalized on increased social and political tensions in 2020.

With your average White cowering in a corner from the jew-authored afromania currently reducing major urban areas to ash, this is the most sensible conclusion. By now we've all seen the massive White Lives Matter riots, the violent extremists forcing "blacks" at a restaurant to do the Roman salute, Biden voters being stalked and killed by "profa" members and all the rest. Yes, White Man Bad is the correct takeaway from all the semitic chaos that used brown criminals and communist scumbags as a bludgeon against a fleeing and surrendering Vichy America.


Although foreign terrorist organizations will continue to call for attacks on the U.S., the report says, they "probably will remain constrained in their ability to direct such plots over the next year."

Now that we're not starting any new wars for the jew, moe-ham-head will go back to detonating in Western Europe.


The threat assessment — which also warns of continued disinformation efforts by Russia — is especially notable as President Donald Trump has downplayed the threat from white supremacists during his term in office.

"White supremacists" aren't even real. A few dozen FBI assets playing "not-see" dress-up is not an existential threat to our wonderful national clogged toilet. Here are more lies as humiliation. You're expected to believe this ridiculous yiddish snow job. Meanwhile, the phony tough guy ignores his base, as usual.

The Trump administration has portrayed Antifa and anarchists as a top threat to the U.S., with the president tweeting this summer that the U.S. will designate Antifa as a terrorist organization.

Nothing was accomplished by this useless hot air and it was up to a 17-year-old hero to finally stop the rot.


All three drafts state that white supremacist extremists are the deadliest threat. However, the placement and language about white supremacy in three versions of the DHS draft documents differ slightly.

We can all agree that Legacy America is bad, but the exact spitting and swearing in hebrew varies a little. Defund the DHS.


The earliest available version of the "State of the Homeland Threat Assessment 2020" drafts reads: "We judge that ideologically-motivated lone offenders and small groups will pose the greatest terrorist threat to the Homeland through 2021, with white supremacist extremists presenting the most lethal threat."

My city is graffiti-covered rubble, but I'm really worried about someone posting a cartoon frog on the internet.


CNN has reached out to DHS for comment. The final 2020 threat assessment has not been publicly released.

The 2020 draft report also finds that Russian state-affiliated actors will continue targeting U.S. industry and all levels of government with "intrusive cyber espionage." According to the draft, China and Russia are the most capable nation-state cyber adversaries, but Iran and North Korea also pose a threat to the U.S.

Still spoiling for more senseless wars, I see. Well, it's nice to know that hasn't changed, even as Whites become the official holocaust goat for the massive failure of our "diverse" sewer. We need more Whites coming home in boxes from insane foreign adventures. Just ask our hand-rubbing friend with the weird little cap.

Moscow's primary aim is to undermine the U.S. electoral process and weaken the United States. Some Kremlin-linked disinformation also might motivate acts of violence in the U.S., the draft report says.

The Russian boogeyman. The evil White terrorist who, strictly speaking, doesn't exist. Witchcraft and the evil eye, the greatest threats to my Puritan village.

This is true, it's everywhere. At the grocery store some inbred meth hillbillies in MAGA hats were loudly saying "racist" things about Mexicans and the "African-American." I told them to shut up with the hate and there's no g*d and Trump is just a Russian puppet. Everyone started clapping and the evil pink people ran toward the doors, completely defeated. The mayor appeared and gave me the key to the city. All of this happened.

"In our modern age, the continued menace of racially based violent extremism, particularly white supremacist extremism, is an abhorrent affront to the nation, the struggle and unity of its diverse population," he said in a speech at the Brookings Institution almost a year ago. 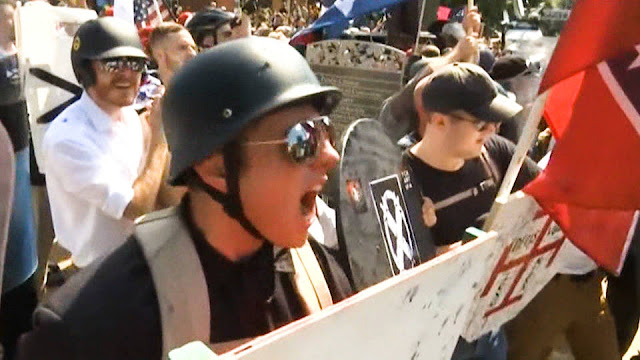 For a struggling actor there's no such thing as a bad part.
Clown World Death of a Nation Decline and Fall Department of Homeland Security Donald Trump Kevin McAleenan Kosher Con Game Terrorists War on Whites