We were so tantalizingly close to fixing our "African-American" burden before the sky started falling over a seasonal flu and months of Soros-funded afromania reduced our cities to smoking craters. You might think Whites got the worst of this insane kosher collapse as the official holocaust goat for the massive failure of our "multi-culti" clogged toilet, but it turns out the real victims were the worthless brown alien hordes picking at the ruins, getting that loot on and attempting to recreate Zimbabwe. Consider the Chiraq "hittah" who has suffered greatly in the kosher chaos. It's all your fault. If only you voted for the senile pederast, it would have completely eliminated death, strong winds and the predictable failure of genetic aliens who are completely incompatible with a civilized White nation and would rather be "kangz" in a blasted wasteland than simply behave themselves in the middle of prosperity and endless appeasement.

The nation's second-largest county has recorded more homicides this year than in all of 2019, the majority of which – 95% – were people of color, the Cook County Medical Examiner’s Office announced this week.

I know, I was pretty surprised by that five percent, too. We can only assume this colorless sliver was mostly mulatto freakazoids and "White" hispanics. Also, it turns out all that optimism about getting dangerous inanimate objects off "the street" and changing the face of police work in a failed attempt to pander to the dark tumor might have been a little misplaced.

Chicago accounts for most of the deaths, with much of the violence occurring in a handful of neighborhoods on the city's south and west sides.

What do those neighborhoods have in common? Strictly economic factors, right?

Murders and shootings are up 52% from the same time last year, according to police data, and dozens of children under 10 years old have been shot, some fatally.

When the goofy caricature of an "intelligent negro" failed miserably. I wonder what's causing this explosion of negro and la-teen-oh pathology? Could it be White "racism" and the Kung Flu?

In July, the city saw its largest mass shooting in recent memory, when 15 people were shot at a funeral on the city's South Side.

We hold these truths to be self-evident. You know the thing. Here, let me play a song for you on my phone about "the beam on the gun."

"Facing illnesses, facing deaths, facing also the higher rates of unemployment and loss of income in our communities has also, unfortunately, played a role in the levels of violence we've seen throughout the year," Katya Nuques, executive director of a community organization in the predominantly Latino Little Village neighborhood, said during a press conference Wednesday.

I think it would be possible to deny obvious reality more than this proud la-teen-ex, but you'd probably need to be a White careerist to do it. I had a cough for a few days, so I drilled an "op" sitting in a car. Unemployment made me burn down buildings. I ain gots no fuggin chedda so it bee tyme two bust awn dis mudda fuddin foon-rall.

"The pandemic really has highlighted the vulnerabilities our communities already faced."

It certainly highlighted our national weakness and willingness to follow almost any order, no matter how ridiculous.

Thousands of Chicagoans have lost their jobs amid the pandemic, which has disproportionately affected people of color in the city.

World ends in fiery explosion, creatures of brown get the worst of it.

There have been more than 75,000 cases of COVID-19 in Chicago, and nearly 3,000 people have died, with three in four deaths among people who are Black or Latinx, according to city data Tuesday.

The precious three thousand lost. If I didn't know better I'd swear this was a cynical hoax.

Demeatreas Whatley, a violence interrupter with the organization Cure Violence in the South Side neighborhood of Grand Crossing, which has historically seen high rates of shootings, said that his community feels "on edge" this year.

It's time to meet what Barry Soetoro would have become if the jew hadn't decided to use the mulatto clown to humiliate Legacy American. This noble monster is trying to cure the genetic shortfalls of dangerous inferiors. "Wow, what a hero" seems woefully insufficient when faced with this selfless simian.

He said that because bars and lounges are closing earlier than usual due to COVID regulations, people are congregating on blocks late at night, making them easier targets for retaliatory shootings, where bystanders have been caught in the crossfire.

I thought the White devil was putting a secret ingredient in the malt liquor that makes brothas hostile, but I guess they can get that way without "geddin muh lawnge awn." It sure is strange how Whites just meekly obey the latest farcical orders from Mount Zion, while the bargain of a lifetime the merchant sold us insists on "congregating" and becoming "easy targets" for their fellow night terrors.

"People are not trying to go in the house; they congregate on these blocks," Whatley said. "The way it is now, these guys, if they get word that three of their guys are getting tooled with on a particular block, they don’t care – they'll shoot the whole block up."

We done got tooled by a Chinese biological weapons lab and some criminal scumbag overdosing after being arrested and now we're destroying Vichy America.

The last time Cook County reported more than 900 homicide deaths was in 2016, the office said – another historically turbulent year in Chicago.

We didn't have any convenient scapegoats back then, other than Whites and the Second Amendment, of course.

Brown expressed frustration that some people arrested over the weekend had committed several felonies in the past.

"Violent offenders need to spend more time in jail in this city," he said. "They need to be held more accountable."

That's "racist." Locking up the negro is bad, I learned that from the Phony Tough Guy and the Loser Party. Be sure to vote, it's really important. 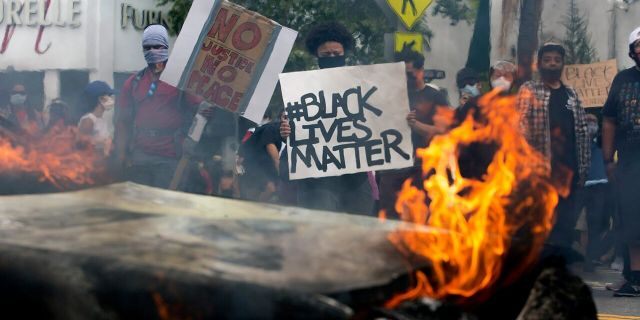