The Profound Ugliness of a Dead Nation

Today's story is a depressing slice of life taken from jew-run America. It's a tale told by the idiot that is the mainstream media, full of horrific violence and pathetic debasement and ultimately signifying nothing. It involves a White four-year-old getting murdered by a piece of negro garbage in the drug house run by his completely debased parents. There is a lot of what a jewish professor might call "intersectionality" going on: Whites addicted to kosher opiates, the brutal idiocy of the "African-American," the decline of a once great nation into history's reeking privy and a quick trip down the memory hole because we need "justice" for "Breonna" and this sickening account of Weimar America is not in any way useful for the ruling semitic spider. It is, however, quite instructive in many ways, so here we are, descending back into the vile muck of a country that has committed suicide for fear of being called names by an alien enemy who dreams of mindless brown slaves.

A 4-year-old boy was shot and killed and four adults were wounded in a shooting that occurred early Monday at a home near the Ohio-Pennsylvania border.

Welcome to a decaying wasteland that only exists every four years. Getting ravaged by opiates, lamenting jobs that aren't coming back and dealing with the pathology of the tar monster are the main attractions to the rusted ruins carpet-bombed by the policies of our criminal zionist government. I bet this latest horror creates lots of new voters for the Loser Party, oh wow! So much winning, I feel really sick.

The shooting occurred around 2 a.m. in the 100 block of Perry Street in Struthers, Ohio. According to witness statements, a “young, light-skinned, Black male” walked into the home and opened fire, police said.

It was the color of an unhealthy turd. How much longer before we'll start hearing about "White blacks" in a desperate bid to deny the appalling content of their character? We've already got la-teen-ohs who magically lighten after their sickening criminality, is it that much a stretch to pretend "yellas" are actually evil pink people? We've got to keep all these lies going somehow.

If a child brought into an insane world by spiritually ill parents and then executed by a negro monster angry about the quality of "ghetto dope" doesn't qualify as a tragedy we just need to retire that word as completely meaningless. Like so many others.

“The suspects left prior to our arrival. We didn’t stop processing the scene probably until about 10 a.m., and we’ve been following several leads going on 14 hours. So far no suspects have been arrested.” 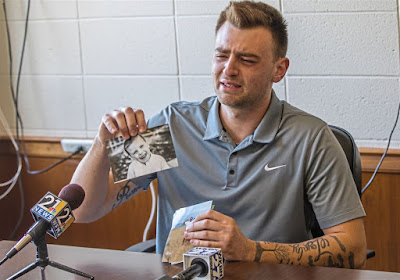 Chief Roddy said the suspect likely fled on foot. “Neighbors heard gunshots, but no one saw a vehicle driving away or anyone else,” the chief said.

This is a vibrant phenomena we call the "Jesse Owens Act," unlike stale and pale Whites who rarely run off after killing a child over narcotics. Innocent "jogger," just out for fresh air and light exercise, etc.

He said there didn’t appear to be forced entry and that the gunman likely walked in the front door, which leads to the living room. All five victims were shot “in very close proximity to each other,” Chief Roddy said.

Chief Roddy would not speculate about a motive for the shooting, but said there was a call about an overdose at the same address just last week.

Yeah, that might be significant. Let me carefully write this down in my Junior Detective notepad.

“It was not a resident of the house,” Chief Roddy said. “The overdosing person fled while we were arriving,” but he said authorities were able to apprehend the person.

We sure caught a break on this one. The last thing the fraying cords supporting civilization need is another criminal overdosing in police custody.

At around 8 p.m. on Monday, Chief Roddy confirmed that Kimonie Devante Bryant, 24, turned himself in to the U.S. Marshall Service, according to reporting from the Tribune Chronicle.

Think of the amazing potential in Kimonie here. If only we could unleash it by voting for a senile pederast. This thing is fully human.

Although Capt. Mamula said that Bryant has “familiarity” with the victims, he did not disclose anymore information.

Yeah. I think you might be on to a promising lead. Here, let me use colorful strings to connect the innocent and forgotten victim, the tar animal, jewish opiates and the pathetic White flotsam.