Despite decades of appeasement, cowardice and waste our kosher globalist economic bodega is still absolutely riddled with "racism." One example would be intelligence testing, where the dark inferior always seems to return disappointing scores, probably because Whites are rude to them and we only paid 100 billion shekels into the "African-American" crevasse last year instead of the new, Trump-approved 500 billion. Another illustration of the "systemic racism" plaguing our internationalist commerce zone is physical evidence from people of brown crimes, the hateful concrete reality which always seems to contradict the official narratives supplied by trusted and impartial sources on our talmudvisions. As bad as those cases are, there may be an even worse outrage. Yes, I'm talking about official crime statistics gathered by our government. Believe it or not, these bigoted hidden figures suggest the heroic tar creatures presented by our jewish friends on the synagogue in the living room might actually not be representative of this failed race, massive burden and the one true g*d of our debased era.

The FBI has released its national crime stats for 2019. Murder was down 0.2%.

Wow, great news! I bet it went down even more in the year of the flu and the jew. Let's take a look at how Chicago is doing. You know what, forget I said anything.

Keep in mind that even this appalling figure is optimistic, with "race unknown" weirdness and "yellas" who magically become White after committing sickening crimes keeping this already insane number from truly reflecting just how worthless the negro inferior actually is. Deportation is the only sane solution.

That means blacks were 8.2 times per capita as likely as a nonblack to be a known murder offender in 2019. (Due to continuing problems with how government agencies collect crime statistics, I’ve given up on figuring out rates for normal categories like non-Hispanic whites. But the big story with murders is blacks, so blacks vs. nonblacks will do.)

We'll never know the full extent of the la-teen-oh chaos (see previous remarks on criminal racial alchemy, but now crank it up to ten), but it's obvious we're dealing with worthless genetic aliens here to loot and kill. Our weakness created this disaster. The next step is Zimbabwe.

In the Black Lives Matter era, murder is becoming a black problem as it slowly fades out for the rest of the populace.

Yeah, "becoming." The nightmare monster is really starting to get bad, all of a sudden. This must be a relatively new development and not something we've been dealing with ever since this failed race was sold as the "bargain of a lifetime" by our greatest ally, the jew.

My opinion is that this incredible disparity in murder rates offers us a clue to the question wracking America in 2020: why do the police hassle black men so much?

By "hassle" we mean showing the patience of a saint in the face of the child-demon behavior from the precious dark animals, sometimes followed by self-defense killings when these vile creatures attack.

But nobody else ever mentions that blacks, at 13.4% of the population, make up now well over 50% of murder offenders. (In contrast, blacks wind up between 1/4th and 1/3rd of police killings.) So I guess the answer must be invisible Systemic Racism or something. 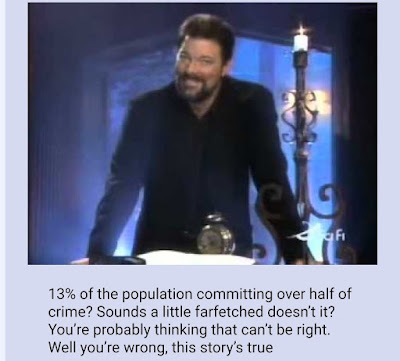