The latest round of jew-funded afromania has begun. Aunt Jemima was blasted while sleeping by "racist" officers. Destroying property will fix everything. The negro will start improving tomorrow, once everything your ancestors built has been reduced to smoking ruins. Endless appeasement, hole in the pocket spending and forgotten victims dying for a moronic failed race and here we are, facing total meltdown from the "African-American" garbage and more excuses from useful idiots controlled by the traveling merchant and, ultimately, pure spiritual evil. Worship the tar monster, gentile. Bowing down to the genetic alien and the demons behind it is the most important thing you can do, along with wearing a bitch-cloth and getting vaccinated. Serve the criminal simian, put on a muzzle, get your shots like a stray dog at the pound. Democracy is the best system. You have to wonder where you can turn for relief and maybe even a small portion of the truth. How about a Cuck Islander who enjoys grilling? Believe it or not, for a while this was actually the case, but the groveling before the Miniluv has now begun in earnest from this dangerous thought criminal.

Yes, but where is the lie? The truth is no defense. Say you love "Diversity" and their shuck and jive for societal cancer, goyim.

PC Mark Gunn, a serving officer for 10 years at South Wales Police, made the controversial comments while discussing Diversity's dance, which sparked around 24,500 complaints, on a podcast he runs on Spotify, called PC BBQ.

24,500 snitches hoping to get an increase in the sugar ration and maybe a shout-out before the Two Minutes Hate. Welcome to Airstrip One, a vibrant internationalist bazaar which has always been populated by sullen brown criminals. Turn in your neighbor, turn in your family. We must stop "controversial comments" which notice reality.

Speaking about the moment Diversity referenced the death of Mr Floyd in their dance earlier this month, the serving police officer said: 'It's finished off with somebody dressed as a police officer kneeling on somebody's neck.

Want to know what the future holds? Imagine a dark animal acting on jewish orders kneeling on your neck. Forever.

'I thought now the other footage had been released and we could see that this drug crazed maniac wasn't as innocent as everyone thought.

This crazy and "racist" statement was completely supported by footage of the arrest and the coroner's report, if that even matters anymore.

'Don't get me wrong, I'm not saying he deserved to die but let's move on.'

I mean, I love insane criminal primitives, don't get me wrong. I do want to keep my job and freedom. Is there a way to turn this telescreen off?

He went on to claim Ashley Banjo flouted lockdown rules, something sources close to dancer have vehemently denied.

Ashley Banjo. Lockdown rules. The death of a nation has a dignity all its own.

Gunn, an officer with South Wales Police for more than 10 years, posts his podcast rants on Spotify under the name PC BBQ because of his love of cooking outdoors.

I just want to grill.

Wow, it's almost like there's a set of rules for the slaves and another for our semitic enemy and their useful idiots.

An angry listener reported Gunn for his un-Pc comments broadcast from his three-bedroomed home in Pencoed, Bridgend.

The "hero" you deserve.

A spokesman said: 'South Wales Police, and our colleagues around the country, stand alongside all those across the globe who are appalled and horrified by the way George Floyd lost his life.

South Wales Police is working hard to become representative of the communities that we police and we are completely committed to understanding and responding to all forms of bias and discrimination.

This is why we arrest the victims of crime, get dangerous pliers and screwdrivers off the street, allow moose-limb child rape gangs to operate for decades, etc.

Gunn, who has not been suspended, has now taken the offensive comments off Spotify but his earlier podcasts can still be downloaded.

I bet this pathetic cowardice saves you from having to wear the rat helmet.

Pc Gunn said: 'I am sorry to anyone who was offended - I'm accountable for what I say and I apologise.

Now to win the victory over myself and love Big jew.

'I'm aware that I've been reported for what I said and I'll take whatever punishment is given to me.' 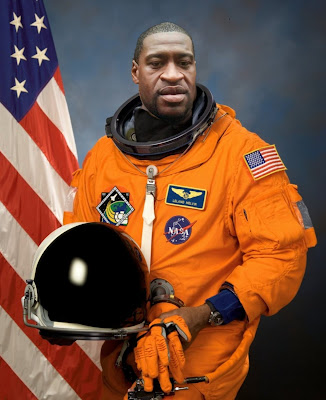