It's almost time for another experiment in muh democracy, the best and most logical system of government. As we all know, the idiotic brown horde has a certain preternatural wisdom when it comes to selecting the better of two bad choices, even if we have to herd these primitives to polls, pay them off, vote on their behalf with illegal ballots, allow them to vote after they cease to be a threat to our nation via death and all the other honest and noble practices a doctrine of counting burry empty heads with heavily sloped foreheads naturally engenders. All is not well, however. There is a growing concern that someone might notice the staggering corruption on behalf of international jewish evil and a few cranks have even suggested "civil war." Fortunately, a media jew has the solution: allowing a satanic globalist kosher front to euthanize the sick and dying old man that is modern America. The phrase "greatest ally" seems woefully insufficient in acknowledging the tremendous contribution the poisonous mushroom is willing to make to our hypocritical moron count.

The rightful president of Belarus, Svetlana Tikhanovskaya, appeared via video last month before the United Nations Human Rights Council. Her country’s August election, she declared, had been “stolen.”

They must have really "hacked" the tar out of that election to get eighty percent of the vote, but a fake news merchant says it happened, so I guess we should believe it. It's just a weird coincidence that Belarus refused to engage in the flu hoax, even rejecting a semitic bribe to go into "lock down," followed by a sudden interest in their electoral process. Put in the ten percent useful idiot, put on your bitch-cloth, this is a question of "human rights."

Ms. Tikhanovskaya implored the United Nations to act. “Standing up for democratic principles and human rights is not interfering in internal affairs,” she insisted, “it is a universal question of human dignity.”

My kosher ideas were soundly rejected by healthy White Russians, so you must overrule them in the name of "human dignity." Fortunately, Putin is protecting his brave little brother, so this speech is basically flatulence in the wind.

No one knows how Donald Trump’s Covid-19 diagnosis will affect his presidential campaign, but before falling ill, he repeatedly suggested that he won’t accept the results of the election, should he lose. In that case, Joe Biden should follow Ms. Tikhanovskaya’s example and appeal to the world for help.

Since he's already crushed the deadly virus, as any remotely healthy person would, you can probably drop that as a talking point before the goyim start asking questions about the need for systematic humiliation over a mild seasonal flu. On the other hand, if the massive fraud fails, the laughing senile pedophile should definitely turn to the jewish octopus controlling our world. Also, wouldn't Trump be the Tikhan-etc in your little example? Three paragraphs in and the zionist snow job is already a total mess. It sure was a lot easier before the internet when every opinion was approved by zion and we could just go on the talmudvision and swear at the cattle in hebrew.

From 1845 to 1847, Frederick Douglass delivered more than 180 speeches imploring British audiences to intervene against American slavery.

Wow, what a hero. Surprisingly, Britain wasn't eager to fight a horrific brother war because the merchant's amazing bargain was unhappy.

After World War I, when President Woodrow Wilson unveiled the Fourteen Points that he hoped would structure the postwar world, the National Equal Rights League, led by William Trotter and Ida Wells-Barnett, asked the Paris Peace Conference to adopt a 15th: The “elimination of civil, political and judicial distinctions based on race or color in all nations.”

If you're not convinced by some whining half-breed, what about the time the worst President we ever had wanted to inject cultural marxist poison into a world still recovering from Europe's First Jewish Century Suicide Attempt?

After World War II, the sociologist W.E.B. Du Bois edited a 94-page pamphlet that the N.A.A.C.P. presented to every ambassador to the new United Nations. “Peoples of the world,” it declared, “we American Negroes appeal to you; our treatment in America is not merely an internal question of the United States. It is a basic problem of humanity; of democracy.”

Much of the world is a smoking crater after Europe's Second Jewish Century Suicide Attempt, let's worry about dark inferiors squatting in White nations.

In 1951, the entertainer-activist Paul Robeson handed U.N. officials a 200-page document alleging that America’s treatment of its Black citizens violated the organization’s convention against genocide.

Later he was murdered by White "racists." I'm pretty sure, anyway.

This June, relatives of George Floyd, Breonna Taylor, Philando Castile and Michael Brown endorsed a letter calling on the council “to urgently convene a special session on the situation of human rights in the United States.”

My right to overdose, shoot at the "five oh" through doors, rough up Hindus in furtherance of cigar theft and be a la-teen-oh who is so unimportant that I don't know its story even though I'm constantly studying and documenting the decline and fall.

Here's a paragraph completely bereft on any meaning, other than "Down with Whites and the civilization they built." I guess shlomo got all tired from its inane history lesson and is just going to give us insulting communist slogans for the remainder of this abortion of an article.

Democrats must now win the popular vote by three, four or even five percentage points to be assured of winning the Electoral College.

Oy vey, the Electoral College is "racist!" Only the rotting urban hellscapes should have any say in which Israel-loving candidate wins. Say what you want about the failure of the phony tough guy, but our chosenite enemies still see him as a proxy for a vanishing White population they hate, which is why drivel like this is still written.

They must achieve that margin in the face of a strenuous Republican effort to ensure that many Democratic ballots are not counted.

Yes, it's the Loser Party doing all the cheating. This is a total kosher inversion of reality, just like everything else these days.

What Mr. Trump is doing this year, the election-monitoring expert Judith Kelley, the dean of the Sanford School of Public Policy at Duke University, recently told The Boston Globe, is the kind of activity that international election observers “would go to countries and write up huge reports about and say, ‘Red flag! Red flag!’”

It really isn't. The "college" racket weighs in with this abject stupidity. No, you can't get rid of that six figure pound of flesh debt by declaring bankruptcy so don't get any clever ideas, gentiles.

They should also lodge a complaint with the Organization of American States, a regional organization that has pledged “to respond rapidly and collectively in defense of democracy,” and which in 2009 used that mandate to suspend Honduras after its government carried out a coup.

Since your criminal tribe is rapidly turning Weimar America into Honduras, this makes a lot of sense.

To professed political realists, this may sound laughably naïve. In practice, international do-gooders at the United Nations and Organization of American States are virtually powerless against the most powerful government on earth.

Yeah. No kidding. Come and take it, see what happens, "do-gooders."

But that’s not the point. While appealing to international bodies may not change the election’s result, it could change the Democratic Party itself. Today, many prominent Democrats remain enthralled by the very myths about American exceptionalism that Black activists have long challenged.

I want to rule over a country I hate. This might be the most jewish sentiment I've ever seen.

Americans are not so inherently virtuous that they can safely disregard the moral discipline that international oversight provides. Wells-Barnett, Du Bois and Robeson understood that from brutal, firsthand experience. Now that Mr. Biden and other white Democrats are tasting disenfranchisement themselves, they need to learn that lesson, too.

In the same way a snake will bite your hand no matter how many mice you feed it, the jew is going to subvert a system already totally subservient to its criminal endeavors. 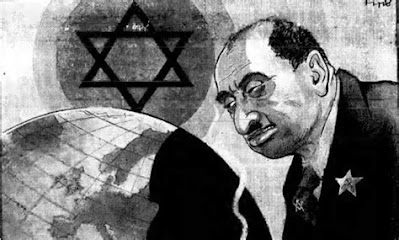