Access to dying White nations is a universal right shared by every two-legged termite. The brown invader is full of special value and is probably a better [your nationality] than you are. Once your ancient homeland and everything your ancestors built is completely destroyed you'll win all sorts of praise in your shallow grave, just you wait. You have to do this or your jewish enemy will call you names. Crawl into the gaping maw of moloch, shkotzim. If you still aren't convinced by this talmudic reasoning, maybe you'll be more receptive to hearing the same vile, insane drivel from a pope who belongs on the end of a rope.

Pope Francis has proposed “a different way of understanding relations and exchanges between countries” that minimizes the idea of citizenship in a particular nation and emphasizes the common humanity of all people.

Join the cuck-o-lick church, worship the jewish idols and the foreign conqueror. Blessed are the cowards and fools. This violent alien with foreign genetic material not shared by real humans is your equal. The desert g*d decided to give it a muzzle, a brow ridge and a 70 I.Q. to test your faith. Let this monster in, a spiritually sick weirdo in a yid lid says it's a good idea.

In a new encyclical letter titled Fratelli Tutti (Brothers All), the pope asserts that the common destination of the earth’s goods “requires that this principle also be applied to nations, their territories and their resources.”

When the "universal brotherhood" talk starts, it's just a matter of time before the mass graves are being filled. We need more communism and enemygrants. Don't expect this wet-brain "principle" to be applied to Israel.

“We can then say that each country also belongs to the foreigner, inasmuch as a territory’s goods must not be denied to a needy person coming from elsewhere.”

Your country, where fifty generations of your people are buried, actually belongs to moe-ham-head rock worshipers from distant lands they've already ruined with their pathological behavior. The amazing moral lessons you can learn from cucktianity.

“If every human being possesses an inalienable dignity, if all people are my brothers and sisters, and if the world truly belongs to everyone,” he writes, “then it matters little whether my neighbour was born in my country or elsewhere.”

If you believe this ridiculous kosher snow job then it naturally follows that you should be deluged with dark looters.

Justice among nations, the pontiff suggests, requires assistance to satisfy the “right to progress” of peoples outside one’s own country, and perhaps even the pardoning of international debt.

Wow, that's a great idea! I'm sure our good friend the merchant will be just as willing to forgive us of the pound of flesh usury that caused two world wars in the disastrous jewish century.

“Certainly, all this calls for an alternative way of thinking,” the pope acknowledges. “Without an attempt to enter into that way of thinking, what I am saying here will sound wildly unrealistic.”

You're going to need to lose your mind, soul and testicles, but once you've mastered double-thinking kosher lunacy the verbal vomit pouring out of my mouth will start sounding reasonable. Let's practice. Two plus two is five.

“On the other hand, if we accept the great principle that there are rights born of our inalienable human dignity, we can rise to the challenge of envisaging a new humanity,” he proposes. “We can aspire to a world that provides land, housing and work for all.” 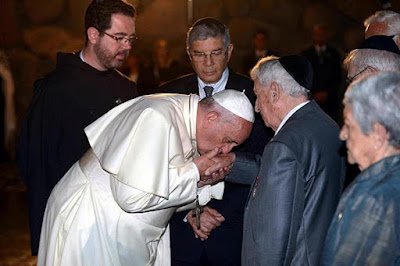