After enjoying a plateful of bugs that I had to keep removing my bitch-cloth to consume for "Turkey Day" it's time to get ready for "Gift Day." I can't wait to take my "freedom pass" to the store to purchase Chinese garbage while remaining in a state of extreme paranoia over a mild flu of unknown origins. Then it's back to the converted shipping crate, to huddle alone with no property and to be so very, very happy. Unfortunately, we still have a snake in this kosher garden and there's no prizes for guessing its identity. That's right, White "racism" which has reared its ugly head in a shocking phony hate crime that almost defies description, let alone comprehension. The vile haters who don't want to eat roaches and carry around a "covi-pass" have attacked negro Santa with semi-harsh words.

A man in Arkansas received a racist note after putting up an inflatable Black Santa in front of his house.

The low-effort nature of this cynical hoax is equaled only by the stunning credulity of the fraud news. Someone sent a note because of an inflatable novelty. Of all the things that definitely happened, this is certainly one of them.

Chris Kennedy, who lives in North Little Rock, received an anonymous racist letter condemning the decoration, according to CNN. Kennedy read the letter during a livestream on Facebook.

I was so shattered by this appalling outrage that I immediately went on jewbook to read what I'd written to White suckers and get dat sweet communist indoctrination center victim chedda. "Racists" donn made me sad, mudda fudda. Gibs me dat paypa. The new holohoax racket, as imagined by a poorly-formed inferior.

"Please remove your negro Santa Clause yard decoration. You should not try to deceive children into believing that I am a negro," the letter said, according to THV11.

Here comes the incredible highlight of this story, where a negro dullard tries to imagine how a White person might express their hateful ideas with the written word. Dear sir, I regret to inform you that your Congoid Father Christmas is an affront to my local "nazi" group. It is outrageous to mislead our Iron Youth into believing I (the letter writer apparently is Santa!) am a coal creature.

"I am a Caucasian white man to you and have been for the past 600 years. Your being jealous of my race is no excuse for your dishonesty."

As a person without color for the last 6 centuries I'm really sick of artifice. This was definitely the work of an awful White Thought Criminal. We need to give this animal money and get rid of more of our rights.

"Besides that, you are making yourself the laughing stock of the neighborhood," it continued.

During the livestream, Kennedy said he was “trying to be as nice as I can,” according to CNN. He added that he was “actually filled with rage.”

This dusky moron is definitely full of something, but I don't think it's "rage."

Kennedy also showed an image of a white Santa with two thumbs down and a label taped to the envelope the letter came in, which resembled the Lakewood Property Owners Association’s (LPOA) logo, CNN noted.


It kind of resembled the logo. Tonight the 70 I.Q. let me down.

LPOA’s executive director, Evan Blake, told THV11 that the letter did not come from the association.

Kennedy told CNN that he felt like “a combination of politics and actual racism” may have motivated the person to send him the letter. He noted that other residents have shared similar racist experiences.

The monsters are here! Looks like "racism" is a serious problem in this neighborhood. What do you think, Encyclopedia Brown? Please turn to the back of the book for the amazing solution to The Case of the Stocking Full of Coal.

Blake told the news outlet that people bought Black Santas in support of Kennedy and that LPOA would display its decoration once it arrives.

How to get your way in 2020 America: call others "racists," make threats, repeat as needed. 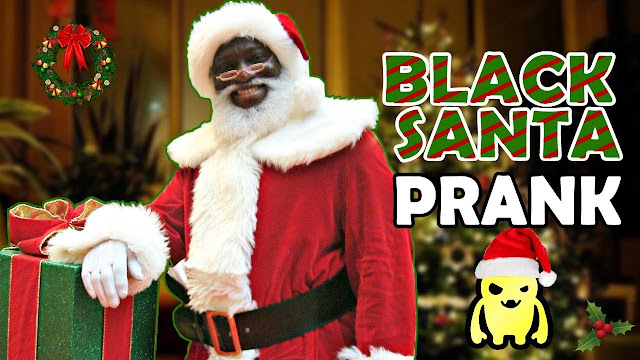