The biggest danger facing our coming brown paradise is "racism," a word created by jew communists in 1935. Defining this kosher neologism isn't easy, but as far as I can tell it could be applied to any action or lack of action from Whites that the poisonous mushroom disapproves of. It should be your life goal to avoid being tarred with this semitic scarlet letter as best you can, but nearly everything Whites do other than committing suicide might potentially fall under the generous merchant's umbrella of Crime Thought, so if you fail it just means it's time to get in that grave. Consider today's shocking story from Cuck Island, land of "second lockdowns," arresting the victims of "Asian" rapists and a general total abrogation of the obligation to survive. What you are about to witness is the worst "racism" I have ever seen.

It's still not too late to turn back. The horrific Crime Words you will soon be exposed to are honestly a million times worse than any moe-ham-head child rape gang that operates for forty years because of a highly reasonable fear of these same dreadful letter combinations. Seriously, you don't want to read any further. I can't be held liable for the massive psychological shock you're going to suffer. I've warned you as much as I can. Please, for all that's good and holy, hit the "back" button and forget you ever saw this story.

Football Association chairman Greg Clarke has resigned over the "unacceptable" language he used when referring to black players.

I want you, the hardcore maniac who can not be dissuaded from facing the word that should not be, to take this opportunity to imagine what the exact nature of the Liberia Grass Hockey suit's appalling noise crime was. Have you got the mental image of Mr. Kickball spewing hate? You're not even close to how ungood this was, trust me.

Clarke said he was "deeply saddened" for the offence he had caused by using the term "coloured footballers".

This man should spend the rest of his life in a hard labor camp. Maybe a bullet behind the ear. Wait, "coloured?" This was the big speech crime? What about "people of (brown) color," something the dark horde has been taught to call themselves by our jewish enemy? The chosenite-run NAACP (Negroes Are Always Causing Problems) contains a dreadful slur that sent not-so-Great Britainistanis to the fainting couch? Maybe "Cuck Island" is no longer strong enough, but "Gelded Moe-ham-head-dan Towel Boy Island" doesn't exactly roll off the tongue.

The comments came as he was talking about the racist abuse of players by trolls on social media to the Department for Digital, Culture, Media and Sport (DCMS) select committee via video link.

Wow, look at all that irony. When the hunter becomes the hunted. I was trying to throw other Whites under the bus of communist speech control, but then I slipped up and destroyed my own vile careerism. This would almost be amusing if the crime committed wasn't so unbelievably depraved.

He prompted further criticism when referring to gay players making a "life choice" and a coach telling him young female players did not like having the ball hit hard at them.

Fact check: True. Most young females don't like being pelted with sports balls. I know, pretty wild stuff. Also, having cement poured into your anus is a g*d-ordained act of "love" and completely predestined to occur in certain human barcodes.

He also said there were "a lot more South Asians than there are Afro-Caribbeans" in the FA's IT department because "they have different career interests".

How is this guy not in a prison cell? Everyone knows your typical Haitian is just as good with computers as anyone else; they're just being held back by the "racism" of noticing basic reality and then commenting on it.

"We can confirm that Greg Clarke has stepped down from his role as our chairman," said an FA statement.

Bending the long arc toward "justice." We defeated the not-sees.

Following his resignation, Clarke said: "My unacceptable words in front of Parliament were a disservice to our game and to those who watch, play, referee and administer it. This has crystallised my resolve to move on.

I plotted to murder Big Brother. I regularly visited prostitutes in the prole areas. My evil actions caused the windmill to collapse. 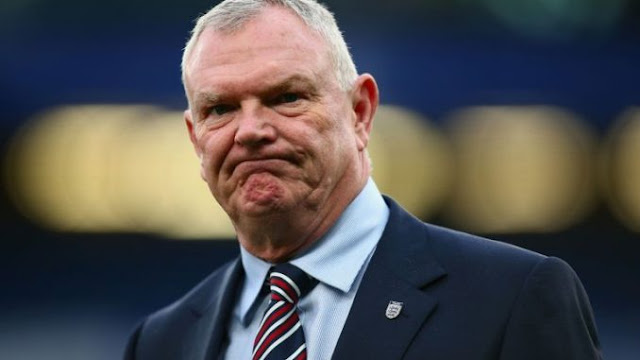 "I am deeply saddened that I have offended those diverse communities in football that I and others worked so hard to include."

During the parliamentary hearing, Clarke apologised after being prompted to say sorry by MP Kevin Brennan.

Coerced apologies are truly the best and most sincere ones.

Brennan said Clarke's language in reference to black players was the kind that did not encourage inclusion, while fellow committee member Alex Davies-Jones called it "abhorrent".

Uh oh, you didn't capitalize "black." I guess we know who will be "prompted to say sorry" tomorrow.

The equality charity Kick It Out said his remark about black players should be "consigned to the dustbin of history" and criticised his comments concerning people from South Asia, gay players and female footballers.

Speaking of the historical ash heap, let's look at some demographic numbers from Airstrip One.

A statement from anti-racism charity Show Racism the Red Card said Clarke's comments "only serve to demonstrate the power of language and the damage of stereotyping groups of people".

Why yes, there are multiple "charities" dedicated to removing the handful of remaining Whites from your degenerate kosher circus. You're surprised?

Speaking before the resignation was announced, Sanjay Bhandari, executive chair at Kick It Out, said Clarke's comments to the DCMS were outdated.

This foreign alien from a land where brown idiots regularly defecate in the street will now lecture you on how you should behave.

"I was particularly concerned by the use of lazy racist stereotypes about South Asians and their supposed career preferences. It reflects similar lazy stereotypes I have heard have been spouted at club academy level," he said.

Are you saying Sanjay from Bombay isn't going to help me fix my Google account?

The casual sexism of saying girls do not like balls hit at them hard is staggering from anyone, let alone the leader of our national game. It is completely unacceptable."

Young girls love being hit with balls. I mean...you know what, the important thing is indigenous Whites are bad and deserve the planned jewish demolition of their ancient homelands.

David Bernstein, former FA chairman, told BBC Sport: "I am just surprised that the chair of any organisation who's got a feel of what's going on in the year 2020 could use those types of words, that sort of language. It's just inappropriate."

Bernstein. Must be German or something. Every. Single. Time.