Not the First Time

The afromania in Kenosha briefly placed national attention on the area between Chiraq and Killwaukee, a place that otherwise might as well be the dark side of the moon as far as our mainstream kosher propaganda machine is concerned. For a brief moment, the entire nation got a look at the changing demographics between two Midwestern negro sinkholes and the destructive idiocy that comes with it. Then the fraud news abruptly stopped caring, at least until today's incredible tale of a White enclave facing a sudden influx of brown malfunction and getting a kosher lecture for not being thrilled by this prospect. It turns out that "racism" is still a serious problem, but don't worry, doomed careerist Whites are ready to battle crime thought, even as their formerly peaceful and happy city is destroyed for fear of the jew. Scenes like this are happening everywhere, of course, but it's rare to see the critical moments of staggering weakness well before the all against all tipping point, when vilifying Whites is still the main priority, long before the "isolated incidents" and then the "everything is on fire because a negro criminal was justifiably shot be the police."

Enough is enough – that’s the message from community groups across the state, looking to address racist incidents in Burlington.

Enough of this not wanting to be replaced and killed, shkotzim. Your tepid resistance to the planned jewish demolition of your community is the greatest sin imaginable. We're really going to put the old foot down on this one. We must welcome the brown cancer. It's the right thing to do.

Today, representatives from all over the state pledged to come here a week from Monday and demand change.

You might think the massive and insulting voter fraud that took place in Wisconsin would take priority, but we've got a struggle session to perform and it's very important I signal my virtue long and loud before it's my turn for kosher slaughter at the hands of worthless genetic aliens.

This article is full of isolated one-liners like this instead of coherent paragraphs. The propaganda has gotten so lazy you can just phone in the White genocide. Yew gwine cee muh duss-kee azz. "Racism" has been defeated. Surrender to evil, it's a lot easier than trying to fight back.

"We call on the Burlington School District and community of Burlington to do more than just sweep this aside.”

We're still waiting for actual examples of the "racism," but I guess it's now just axiomatic that all Whites are inherently evil and you can just skip right to making demands and screaming like a crazed baboon at your long-suffering benefactors.

"The n-word is yelled throughout the classroom and hallways on a daily basis," Darnisha Garbade said.

Wow, that's pretty bad. Even if this is true, which it isn't, is that honestly all you have? I mean, have you ever listened to (c)rap "music," Darnisha? Compare this dubious account of crime noise to what inevitably happens to Whites unlucky enough to be the minority in coal black publik shmuels. It's a lot worse than hate noises, you can be sure of that. The reaction from the system in these cases is, of course, apathy and blaming the victims.

Garbade is the president of the Burlington Coalition for Dismantling Racism.

Under every stone. In a city that was over 95% White in the last census, our jewish enemy and their dark useful idiots are hard at work. 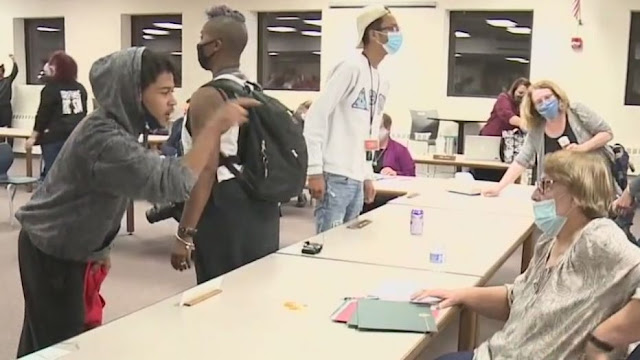 Please consider this incredible photo. 2020 America is summarized in a single amazing image. Childless and withered Hillary Clinton voters who love all the brown people but tried their best to live far away from them now must absorb the full brunt of the natural consequences of the marxist drivel they supported. No bitch-cloth for Barkevious, it needs to hoot and ook at your "races" milk azz. We can't share a country with this worthless burden. The only sane solution is their removal. We need our own countries.

"The school district is failing to hold these people accountable. They are failing to denounce the racism," she said.

I'm sure as a White you can just yell "nigger" in the halls of a semitic moron factory with no consequences whatsoever. Gaslighting from living fossils, cowardly cat lady "leadership" folding instantly, we hold these truths, come on man, you know the rest.

Burlington has been dealing with racial issues for months. In September, a debate erupted at a school board meeting over “Black lives matter” curriculum.

Bow down to your g*d, the tar monster. Criminal primate lives matter. It sure is weird how forcing the races together always causes "issues." It's almost like we'd be happier with our own kind.

Then a racial slur was found written in woodchips at Cooper Elementary School.

This might be the single worst phony hate crime I've ever seen, and that's really saying something. Woodchips of hate! Put those seven-year-olds in a gulag! Welcome to Clown World, stay as long as you want.

Last week, things got so heated, Burlington police officers had to escort speakers out of another school board meeting. It was forced to end early.

93 percent peaceful, etc. We're not equal. They're not even human. It's time for "slabery rep-ah-muh-ray-shuns" in the form of a one-way ticket back to Wakanda.

The group now plans to pray outside the next school board meeting.

Oh mighty moloch, with your horrific maws that devour children, please hear us. I assume this was a mishearing of "We gwine prey awn dem wites at duh nacks meedin."

"It will be followed by a car caravan which will drive by the school district member’s houses.”

We'll call you "racist" and then threaten your family until you submit. It worked great in Michigan!

In a statement to FOX6, district leaders say they will be adopting an anti-harassment, anti-racism policy at their next meeting.

In ten years, probably much sooner, we'll be hearing about the total failure of Burlington schools.

The district also directed us to their website, which includes a statement rejecting all forms of racism and outlines the community partners it's working with to create a more equitable school district.

We reject all forms of witchcraft, including root wizards, spectral attacks and the evil eye. We will defeat this horrible evil by burning unpopular people.