We're getting very close to writing another chapter in our great tradition of democratic elections, where an informed and educated electorate gives the consent of the governed to the wisest and most noble paragons of our people to guide our great nation into a bright future. In other words, I trust you stocked up on firearms, ammunition, body armor, fire extinguishers, bulletproof glass, first aid kits, steel bars, sand bags, motion detectors, floodlights, night vision goggles and all the other accoutrements of a good little citizen living in a terminally ill clown country. If we're lucky, America will linger on for a few more months, maybe even years. If we're not lucky, tomorrow will be the date of our final collapse into balkanization, tribalism and bloody chaos. It's enough to make one yearn for the relatively low-level war currently raging in the Chiraq all against all. Considering what might be right around the corner, thirty worthless simians blasted in a weekend is going to seem like the last burst of summer in late October before the endless winter settled upon the land.

Twenty-nine people were shot, four of them fatally, across Chicago over Halloween weekend, including two men fatally wounded on the South Side.

We don't need scary make-believe when we have real worthless monsters in our midst, running wild in a city currently boarding itself up for muh democracy. The night the "bargain of a lifetime" got loose from its kosher chains. What careerist politician will survive and what will be left of the crumbs from the jewish plate?

In other attacks, three women were shot and wounded early Sunday in Englewood after a man opened fire inside a home during a fight. Two boys under 18 years old were also injured in separate shootings.

If you were wondering what would have happened in Philadelphia if the "racist" police had decided to just keep driving, here's your answer. The precious and important "black life" opened fire on the concubines. We hold these truths...you know the thing.

The weekend saw more shootings - but was less deadly - than last weekend, when 23 people were shot, seven of them fatally, between 5 p.m. Friday and 5 a.m. Monday.

Does this count as progress? In Chicongo, it's always difficult to say. More nikkas be poppin awf an sheeet, but their aim seems to be getting worse.

About 8:25 p.m., two people walked up and fired shots at the man as he stepped out of a home in the 2200-block of East 68th Street, Chicago police said.

The exiting "vibrancy" of the "African-American" experience. Time to step outside and get turned into something that's no longer a massive drain on a doomed and insane nation after the "walk-by" shooting.

Minutes earlier, an 18-year-old man was fatally shot in Lawndale on the West Side.

Wow, talk about an incredible coincidence! What are the odds of that?

The man was shot in the "flank area" about 8:20 p.m. in the 3800 block of West 13th Street, Chicago police said. He died about an hour later at Mount Sinai Hospital.

Hello, it appears I've taken grapeshot to my longshanks. Time to shed the mortal coil after medical care as largess.

Kenneth Burks, 56, was in a vehicle about 7:05 p.m. when someone in another vehicle pulled up next to him in the 3300-block of West Huron Street and opened fire, police and the Cook County medical examiner's office said. Burks was struck in the head and arm, and taken to Stroger Hospital, where he was pronounced dead.

Sitting in a car in the Midwest Mogadishu. What could possibly go wrong?

On Friday night, a man was killed and three others injured in a drug-related shooting in Morgan Park on the Far South Side. The shooting happened about 9:15 p.m. when someone entered a home in the 11600-block of South Vincennes Avenue and opened fire, according to police.

Non-violent drug offenders. Let them all out; we're reuniting families. I'd be shocked if this lunacy doesn't earn the phony tough guy at least four percent of the living fossil vote.

About 12:50 a.m. Saturday, a 17-year-old boy was shot in Humboldt Park on the Northwest Side. The boy was sitting in a parked car in the 3800-block of West Augusta Boulevard when two males approached and fired shots, police said. He was struck in the back and brought to Stroger Hospital for treatment.

Make sure you vote so we beat those dirty LIE-brals who are, let me remind you, the real "racists." We're going to resuscitate the dead body politic, just you wait. The Loser Party will fix everything. 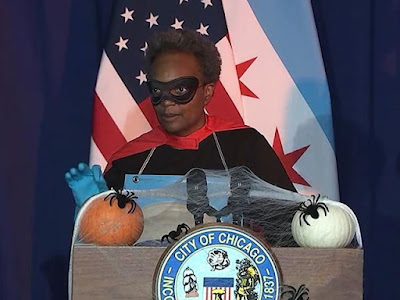