Walked Up and Unleashed Gunfire

You're going to have to cancel "Turkey Day," goyim. We're facing an unbelievably deadly plague and any human contact might act as a "super spreader" incident that could ultimately destroy humanity via a seasonal flu with a survival rate of 100 percent if you want to round to the nearest whole number. Instead, we need you in your pod with no personal property slowly eating a cockroach sandwich because you must put your bitch-cloth back on between mouthfuls of cold exoskeletons and nourishing antennae. This is the kosher "Great Reset," which is either a baseless conspiracy theory or on the cover of magazines and the topic of meetings of semitic globalist evil, depending on how we're currently trying to attack you, your family and your rapidly eroding rights. Cuckdown 2 is saving lives. Here's a vaccine full of poison, slave. This was the most honest election in American history. The negro is your g*d. You know the thing.

Chicago reached 700 homicides this year during a violent weekend that saw six killed and 46 wounded - the second time the city reached the milestone in two decades.

Despite another outbreak of jew-funded "Black Lives Matter" afromania and spiritual sickness, the tribal warfare in a city annexed by the African all against all is worse than ever. Who could have predicted this? Making it impossible for the "five oh" to act as zookeepers in the coal creature ruins should have made things better. The only reason the groid misbehaves is because of "racism," after all. Once we completely surrender to the encroaching rot we're going to see noticeable improvement instead of record levels of violent pathology, just you wait.

Five people were been killed, and 45 others wounded in shootings across Chicago over the weekend.

Fifty simians zapped in a decaying remnant of a healthy America that's officially dead. The 500 billion from the phony tough guy would have fixed this.

The 700th homicide was a man killed in a quadruple shooting early Sunday on the Far South Side, according to records kept by the Chicago Sun-Times.

Another negro mass shooting for the memory hole.

He was standing with a group on a sidewalk in the 700-block of East 101st Street when shots rang out, according to Chicago police.

Make sure to practice "social distancing," gentiles. We are closer when we're far apart. Two and two is five. Meanwhile, monsters straight from a nightmare huddle together on sidewalks, only to fall victim to one of those "high capacity" firearms that jumps up and fires itself.

The man, 28, was shot multiple times at 12:40 a.m. and died three hours later at a hospital, according to police and the Cook County medical examiner's office.

A genetic alien expires after a final wasteful burst of "badakathcare." You'll get the bill, don't worry.

I know it looks bad, but the "community policing on steroids," the removal of dangerous weapons from "the street" and torturing horses on the freeway is the amazing cocktail that should cure this incredible disaster, just you wait. Once we completely disband the police things will get better. We're all equal. They're fully human. The most carefully monitored and fair election we've ever had. Rags stop disease. You can't see your family. Wear goggles. Here's an injection that will make you an idiot.

Homicide victims are disproportionately Black males, according to medical examiner's public records. More than 88% of victims in 2020 are men, and 78% of total victims are Black.

Wow, really? Are you sure? I was told Whites commit the same amount of crime but are protected by "racist" law enforcement and courts. Wait, hold on, here come some new records I just found showing a thousand White homicides.

Six people were shot in the Auburn Gresham neighborhood on Chicago's South Side early Saturday morning, according to law enforcement officials.

Bad things happen in a neighborhood destroyed by racial inferiors. What are the odds?

A 30-year-old was in a vehicle about 10:15 p.m. Saturday in the 7900-block of South Brandon Avenue when someone opened fire, striking him in the chest, back and arms, Chicago police said.

Time to sit in a car in a cold weather Liberia. What could go wrong?

Hours earlier, a man was killed and another wounded in West Pullman on the Far South Side. They were in a vehicle about 7 p.m. in the 12200-block of South Eggleston Avenue when someone walked up and unleashed gunfire, police said.

Whoever does these Chiraq negro crime reports is truly the literary powerhouse of our time. "Eye bee awn-leeshin dat gawn farr, beech."

Devon Wash, 32, suffered a gunshot wound to the upper body and was taken to Roseland Community Hospital, where he was pronounced dead, according to police and the medical examiner's office.

Imagine all the value we lost. Thank the desert idol it will immediately be replaced by a flood of identical and dangerous dark idiots.

Eli Lozada, 21, was sitting in a vehicle about 12:30 a.m. in the 100-block of North Waller Avenue when someone approached the vehicle and fired shots, striking him in the head, Chicago police and the medical examiner's office said.

See, it wasn't all negros, you awful "racist." It was also la-teen-oh sewage.

About 5:17 p.m., Alexander Fletcher, 28, was found in a vehicle with a gunshot wound to the chest in the 6200-block of South Yale Avenue, police and the medical examiner's office said. He was pronounced dead at the scene.

We need an expensive government program featuring rapping cartoon characters to teach the evolutionary dead-ends about the dangers of sitting in a car in a area that resembles Sudan with slightly better utilities. 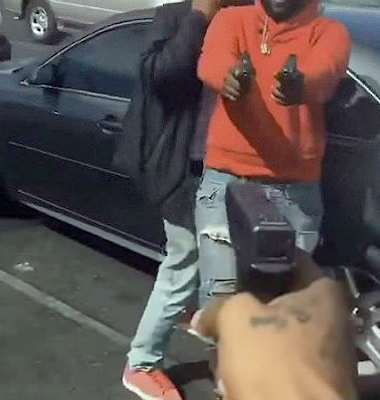