We are facing the greatest crisis in the history of our dead sodomite nation. No, not the incredibly fraudulent election that marked the end of the illusion of muh democracy. I'm talking about a lethal seasonal flu that is guaranteed to kill millions unless you put a rag on your face and cancel "Gift Day." You need to "hunker down" and live in fear, you worthless slave. Here's your vaccine, cattle. The same jew-dominated government that promotes sodomy, riots and endless foreign war cares deeply about your health and safety. You're going to have to take the moron needle, we have to save semi-humanity. Give up your rights, stop thinking, get in the grave. Our kosher "multi-kulti" will not perish. Our sacred freedoms, like the right to bow down to jewish evil, will be preserved.

At least 40 people were wounded and six killed in shootings across Chicago over the weekend.

Despite the sky falling and the amazing second wind of the "pandemic," the Chicongo drillahs are still out there, heroically blasting their fellow evolutionary dead-ends in urban wastelands completely annexed by Africa. "Black" lives matter.

A person was shot and killed Sunday in Austin on the West Side, police said.

Wow, really? I mean, what are the odds?

A male was in the 4900-block of West Hubbard Street when three people approached him and one of them opened fire, Chicago police said. The male was struck multiple times in the back and pronounced dead at the scene, police said.

The exciting and enriching "diversity" provided by the "male" genetic alien forced upon us by our greatest ally. The Jesse Owens act is cut short by a barrage of gunfire. Rest in power.

One person was killed and another wounded in a shooting during an attempted robbery Sunday morning in West Town, police said.

About 4:30 a.m., a 28-year-old man was walking in the 1200-block of West Fry Street when an unknown male approached him on foot, showed a handgun and demanded his belongings, Chicago police said.

These pre-dawn hours are perfect for my constitutionals. Hello, it appears a fellow physical culture enthusiast, perhaps one of those "joggers" they discussed on the wireless, is approaching.

The male then shot the 28-year-old in the leg, according to police.

Unknown male was a bad dude. We hold these truths, come on man, you know the thing.

The unknown male was transported to Northwestern Memorial Hospital where he was pronounced dead, according to police, while the 28-year-old was taken to Stroger Hospital in good condition.

After one more incredibly wasteful burst of "badakathcare" it finally ceased to be a danger to other tar monsters. You'll get the bill for this and you'll also get to fund the negro bastardy which will quickly replace this worthless inferior.

A 53-year-old man was in a vehicle about 1:05 p.m. in the 3100-block of North Sawyer Avenue when a light-colored vehicle pulled up and someone inside opened fire, Chicago police said.

Silverback sits in a car. You'd think by this advanced age the coal creature would understand this is a bad idea in the Midwest Mogadishu, but I guess not.

The man was shot in the back, head and taken to Illinois Masonic Medical Center, where he was pronounced dead, police said.

Even the reporter seems to have finally given up. Shot in back, head, died later on after more expensive and heroic medical waste, etc. 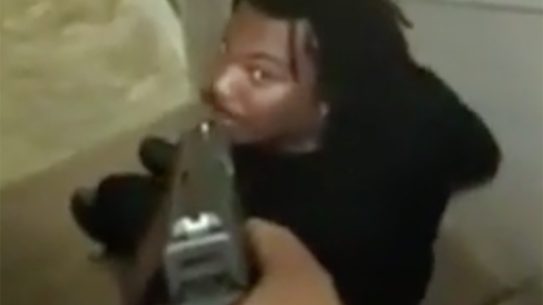 In non-fatal shootings, three men and one teenage girl were wounded Friday in West Garfield Park.

The group was standing outside a residential building about 10:50 p.m. in the 4400-block of West Adams Street when someone fired shots from the street, striking all four people, according to police.

Muh "social distancing." Creatures straight from your worst nightmares cluster around decaying ruins only to get zapped by "someone."

About 2:35 a.m., a 27-year-old man walked into Jackson Park Hospital, 7531 S. Stony Island Ave., with a gunshot wound to the leg but would not provide police with any information on the attack.

Stop snitchin, mudda fudda. It looks like the "community policing on steroids" isn't working, if you can believe it.

Earlier, a man was critically wounded in a shooting in the South Shore neighborhood. About 2:10 a.m., the 41-year-old was shot in the leg and chest during an argument with a man outside in the 7700-block of South Luella Avenue, police said.

Let me explain some of my issues with the modern quantum theory you insist on uncritically defending. Wait, is that a gun?

The "Platinum Plan" would have fixed all of this, but you must accept the highly secure and honest will of the people.