How to Loot America

I can't wait to get my 0.6 large worth of crumbs off the jewish plate. This is a significant amount of geld, life-changing, even. Yes sir, take that gun out of your mouth, your criminal jew-controlled government is giving you six full Franklins worth of "rep-ah-muh-ray-shuns" for the murder of America that occurred this year. We're getting very close to the point where jew plutocrats will break open a few boxes of pennies in our rotting cities and then watch and laugh while the brown mongrel slaves promised by their talmud fight to the death over the amazing kosher largesse. We are living in a giant corpse that is drawing scavengers from far and wide. I guess if you don't like it you can vote your way out of this. Wait, maybe you can't, huh, huh, huh. Anyway, enjoy your shekels and try not to spend it all on guns and rope.

As Congress prepares to pass a $900 billion COVID-19 stimulus bill rolled into a consolidated appropriations package - with funding for assistance for households and businesses, along with vaccine distribution and other pandemic-related measures, the bill also includes a ton of pork per usual.

I'm not sure why we call this appalling waste "pork" when it's actually completely kosher. Here's nearly a trillion in magical fiat currency down the toilet. Now get back in your house, you contemptible worm. Take this untested vaccine, it will make you healthy. Put a wet rag on your face, you scum. I will put a round in you.

We already know about the $600 checks for each adult and dependent. This time, however, 'mixed-status' households where eligible citizens live with illegal immigrants, will not only receive payments - they can retroactively claim benefits after being left out of the last round.

Can I renounce my citizenship to the North American Globalist Bodega and get retroactive money as a reward for breaking the law? Talk about the bargain of a lifetime. Me speekee no eeeengggleeeesh, gib me dat chedda.

And now, on to the pork... which includes billions to foreign countries, US military weapons purchases which go above and beyond their budgets, $40 million for the Kennedy Center, and nearly $200 million so that federal HIV/AIDS workers overseas can buy cars and car insurance, among other things.

The bad news is you're degenerate sodomite filth with the Anally Infected Death Sentence. The good news is you just saved a lot on your car insurance courtesy of pathetic national suicide!

A minimum of $3.3 billion in grants to Israel.

Our greatest ally. How can you not include money for the merchant in a bill that's supposed to help the doomed Legacy Americans? It just makes sense.

Also included is $453 million to Ukraine, on top of the $400 million Trump eventually released. No word on how much of that goes to the 'big guy.'

I guess the phony tough guy doesn't need a picture of a giant "U" and an actual crane (Huh huh, get it?) to send Federal Reserve fiction to a Soros disaster area.

$10 million for "gender programs" in Pakistan.

It's very important that Rashid from bah-loo-chee-stan in the Pakistani anus learns that some women have penises, courtesy of The Great Satan.

I've decided to change my name to "East Sudan" and use this new identity to try to con several million out of Uncle Sucker and his semitic boss.

There, there, Asian sewer. Let me pat you on the head to the tune of a fourteen with an insane amount of zeros after it.

SPACE FORCE ALL THE WAY!

$208 million to upgrade the Census Bureau's computer systems (which couldn't have waited until the next count in 2030?).

With this new funding we should finally be able to uninstall the financial program that was on the computer when it shipped from the factory and figure out how to change the wallpaper.

$40 million for the Kennedy Center, and funding to discourage teenagers from drinking and hooking up.

I would be shocked, absolutely shocked, if this appalling waste doesn't end teenage drinking and fornicating for all time.

Funding for a commission to educate consumers "about the dangers associated with using or storing portable fuel containers for flammable liquids near an open flame."

Wow, I had no idea flammable liquids could catch fire. Maybe that's why most of my skin is severely burned. Thanks, Federal Government!

Just remember, $600 is a significant amount. 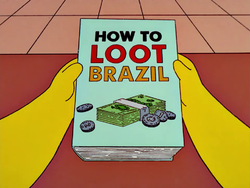