Minneapolis: Who Could Have Predicted This?

We need to get rid of the "racist" police. Too many innocent negro criminals have died at the hands of these vile enemies of our brown mongrel zoo. Once the rule of law and its attendant "systemic bias" is gone, the "African-American" inferior is bound to start behaving itself and respecting all our other dying institutions. Consider the success we're having in Sweden: The State, where a cherubic age 46 "teen" with unlimited potential to contribute to our national reeking privy was cruelly slain by an evil yellow fever "racist," sparking the current amazing revolution against the most basic elements of a functioning civilization. With the "five oh" now safely contained, good boys are free to express the content of their character. Next stop, Wakanda.

A housekeeper arriving early to her shift in south Minneapolis was confronted by two hooded teenagers outside her driver’s side window.

Those crazy "teenagers" and their innocent little pranks like trying to steal "whips" and "rape and murder gone wrong." You were young once, right? This is normal behavior. A scene from South Africa unfolds in the Moneyapolis all against all. We funded our own destruction and then defunded the only bulwark left against the coming dark nightmare.

One pointed a gun at her head, demanding that she get out, before firing three shots: two ricocheted off the window and a third struck her side-view mirror.

If you were wondering how "100 shot in Chiraq, 12 dead" is even possible, here's your answer.

The woman threw her car into reverse, sending the teens fleeing in the stolen car they arrived in, the latest in a series of brazen attempted armed robberies and carjackings in a wave that is stretching across the city.

You need to be armed. You need to move as far away from "urban" negro wastelands as possible. No one is coming to our rescue. The jew controlling our dead nation wants you dead. The tar monster is their weapon against us.

Minneapolis residents are grappling with a triple-digit percentage increase in these crimes, and incidents occurring at all hours, including broad daylight.

This is surprising, since our biggest problem, according to our criminal kosher government, is "White supremacy." Maybe it's the "klan" or "nazis" doing this. G*d knows, this article is not going to mention the racial component behind this appalling suicide of a city.

“She was completely traumatized,” the woman’s employer, Kathy Higgins Victor, said of the Nov. 27 incident. “It’s just so bold.”

Yeah. I would imagine. Any fear the negro might have had of being punished for their moronic criminality is long gone. It's open season on slumbering Whites.

Over the past two months, Minneapolis police have logged more than 125 carjackings in the city, a troubling surge that authorities had largely linked to small groups of marauding teens.

It's probably just a few bad apples causing this massive crime wave. Most genetic aliens are just as human as you are. We hold these truths...you know the thing.

Within a one-hour period Saturday morning, police reported three separate carjackings in southeast Minneapolis, including one where an elderly woman was struck on the head. Such attacks are up 537% this month when compared with last November.

A 537% increase in "carjackings" is a small price to pay for being called slightly fewer names by the kosher spider and showing our sincere worship of the new g*d for our time, the dangerous living fossil.

“The numbers are staggering,” said police spokesman John Elder. “It defies all civility and any shred of common human decency.”

Don't worry, a well-fed careerist clown is on the case. Where's the common human decency in violent animals incapable of connecting cause and effect? This almost unbelievable collapse is being caused by a lack of "civility." Thanks. This hot air is very useful.

You do not have the luxury of doing "routine tasks" in areas where the coal creature is present.

A significant number of armed stickups have targeted seniors and unaccompanied women at their vehicles on Minneapolis’ South Side.

The most vulnerable available victims. The content of their character. The biggest problem in our globalist kosher bodega is White "racism."

A retroactive count by analysts determined that Minneapolis has seen at least 375 carjackings this year — including 17 last week. That overall tally is more than three times higher than 2019.

I know it looks bad, but we put the dead groid scumbag in a gold coffin and gave it four funerals and let its fellow primitives burn, loot and kill, so this is probably just some really bad luck.

“These suspects have been known to ask for directions, then rob the victim of a purse, phone or car,” read an MPD crime alert issued last month in the Third Precinct.

When Barkevious needs "directions" it's time to deploy your firearm.

A city employee fell victim to south Minneapolis carjackers in September, authorities said. Police found her abandoned vehicle only after it later crashed and caught on fire.

Should citizens find themselves targeted, law enforcement advised that sometimes it’s better to hand over material goods rather than risk your own safety.

Meekly surrender to the chaos we unleashed. You'll be fine, don't worry. Soon you won't own anything, will live in a pod and eat weeds and fungus, so this is just a temporary problem.

“People need to know what their abilities are,” Elder said. “A 74-year-old woman trying to duke it out with two 18-year-olds is not a great idea.”

Better work on those "abilities." Practice at the firing range, get your concealed carry, assume every negro is planning to attack.

The spree comes amid a nearly unprecedented spike in violent crime, particularly shootings, since the May 25 killing of George Floyd in police custody and the civil unrest that followed.

Wow, it's almost like sickening cowardice and delusional thinking have consequences.

In November, the toll of people shot this year surpassed 500 in Minneapolis, the most in 15 years. Seventy-nine homicides is the highest count since the mid-1990s, an era when the city earned the grim moniker “Murderapolis.”

Look out Chiraq and Killwaukee, Murderapolis is setting exciting new standards in self-inflicted decline and fall!

Some neighbors wondered if the community should invest in a license plate reader to record all incoming vehicle traffic, like Plymouth did last month to help curb mail theft. But that deterrent comes with a price tag of roughly $2,000 a year to operate.

Wow, two large. That's too rich for my blood. We also need millions to "build back better" the smoking crater that used to be our city.

“I am unsettled by the acceptance that carjacking and attempted murder is being normalized as a new way of life in our city,” Higgins Victor wrote. “Police are gone. Criminals are emboldened. City leaders are not working toward common goals.”

I know it looks bad, but a negro criminal overdosed after being arrested so we kind of had to destroy everything. 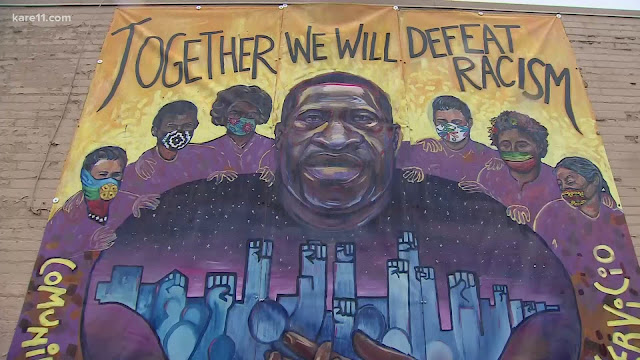