The precious jew has made so many positive contributions to our decomposing globalist bodega: communism, usury, pornography, replacement immigration, degenerate art, feminism, the sodomite agenda and many others. In return, all our greatest ally asks is that we completely surrender to this demonic evil and then die. This is truly the bargain of a lifetime. Incredibly, there may be some goyim (a slur the jew uses to describe you and everyone you love) who aren't getting with the program of the Great Semitic Reset and there might even be some grumbling here and there. Faced with this staggering "anti-semitism," the only sensible answer is removing whatever rights the cattle (you) might still have. Consider a shocking and highly credible attack from Idaho "nazis." Get in the grave.

Idaho police are investigating an Anne Frank memorial that was vandalized with swastika stickers on Tuesday.

The monsters are here. The ballpoint pen memorial has been desecrated by goose-stepping malefactors. We need more Thought Crime laws and we need them right now. Also, Idaho has ugly Purim victory markers set up by our jewish enemy; the tiny minority that has us completely surrounded. I'm pretty sure The Gem State was part of the Axis during Europe's Second Jew-Assisted Suicide Attempt, so it makes sense they should have to absorb this humiliating kosher ugliness.

The Wassmuth Center for Human Rights in Boise posted photos to Facebook saying the memorials had been plastered with the hateful stickers.

Stickers of hate! This is proof that you deserve the endless attacks by the rat demons. It took several minutes to peel them off and some of that sticky backing might be there for days.

One photo shows a life-sized statue of Frank holding her diary — on which a sticker with a large black swastika and the phrase, “We are everywhere” had been posted.

Yes, the cynical hoaxers from that special tribe sure seem to turn up where you'd least expect. 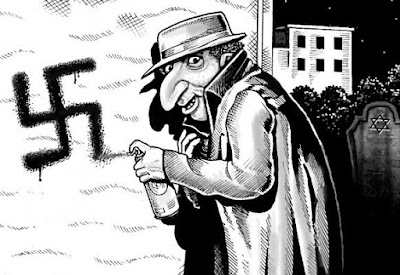 The diary is where Frank had documented her life while she and her family hid from Nazis in Amsterdam before they were captured in 1944 and imprisoned in concentration camps.

This description is for the benefit of all three of you who weren't forced to read this historical fraud as part of your "education."

Another photo shows the memorial called “The Spiral of Justice” featuring the same swastika sticker.

Here's some yid visual pollution for your embattled White community. Whenever you look at "The Spiral of Justice" you'll remember who is in charge, you pathetic unclean meat. Whites, the only race that is willing tolerate outrageous semite snow jobs in the name of "fairness" and "justice." Our best traits have been poisoned and turned against us.

“What makes this event actually so sad was the blatancy where they were placed, how they were placed and the message they were proclaiming,” said Dan Prinzing, the executive director of the Wassmuth Center for Human Rights.

It's almost like whoever did this wanted the maximum possible backlash against our rapidly eroding freedoms.

The incident is under investigation, and police have reached out to the Anti-Defamation League, an organization that records anti-Semitic incidents in the U.S.

Let's get an organization that tried to frame a negro dullard for the rape and murder of a White girl by a jew criminal scumbag on the case.