It's extremely important that we get the miracle vaccine to "minority" animals first. I feel so strongly about this that I'm willing to give my semite syringe to a brown alien. In fact, my selfless heroism is so powerful that the jew jab can pass over my house entirely and be reserved for the precious dark burden. It's okay, I'll somehow learn to live with a non-paralyzed face and a mind that isn't full of kosher poison. While Barkevious waits patiently to get treated like an actual African by medical expert Bill Gates, its fellow nightmare animals were getting another sort of dangerous injection in the form of Chiraq "drillin." This new anti-crime "vaccine" can turn a negro into something that isn't an existential menace to a dying nation, although, as usual, the success rate is depressingly low.

At least six people were killed and 30 others wounded in shootings across Chicago this weekend, including a half dozen people wounded in a single attack at a South Side party.

When Whites are gone, when all hope is gone, this is what remains. Living fossils wage tribal warfare in smoldering ruins while the vanishing Whites worry about face diapers and the imminent planned jewish demolition of muh economy.

The victims were holding an after-hours party early Saturday at the Get Glammed Beauty Bar, 8936 S. Cottage Grove, when a person walked in about 12:25 a.m. and started shooting, police said.

I'm sure the congoids were all staying six feet apart and wearing bitch-cloths at an event that broke about ten different laws that Whites and only Whites are expected to obey. Before the deadly seasonal flu could exhaust the Ethiopians, a "person" performed a walk-by shooting. Here's another negro "open shooter" incident for the memory hole.

A woman and five men were wounded - one of them seriously - before the gunman took off, police said. No arrest has been made.

I'm not sure how you can fire into a crowd of worthless inferiors and record a Terminator 2 "0.0 semi-human casualties," but the 70 I.Q. and malformed primitive body does have consequences. No arrests were made. The "community policing" on "steroids," ladies and gentleman. At least we haven't been accused of "racism" for several minutes.

On Saturday, two people were found fatally shot in a vehicle in Marquette Park on the South Side.

It wouldn't be a Chiraq weekend without a bit of the routine.

Saturday evening, a 19-year-old man was killed in Douglas Park on the West Side. He was in a vehicle about 5:30 p.m. in the 1200-block of South Washtenaw Avenue when a dark-colored vehicle pulled up and someone inside opened fire, police said. The man was shot in the head and neck, and taken to Mount Sinai Hospital, where he was pronounced dead.

The dark-colored contents of the dark-colored vehicle. Pouring 500 billion shekels down the negro drain would have almost certainly fixed this. We can only hope Beijing Biden has an even more extravagantly wasteful plan somewhere in his rapidly decaying mind.

He was identified as Daron Johnson by the Cook County medical examiner's office.

Let us take a moment to mourn "Daron." This creature will be in a better place, namely on illegal ballots in the next hypocritical and fraudulent racial headcount.

Early Saturday morning, a 47-year-old man was fatally shot in Gresham on the South Side. Alex Kinsy was running from a male who was chasing him about 3 a.m. in the 1300-block of West 87th Street when the male fired shots, striking him in the head, police and the medical examiner's office said.

The Jesse Owens act is cut short by deadly projectiles. Look at that boy die.

At least 22 other people were wounded in shootings across the city between 5 p.m. Friday and 5 a.m. Monday. 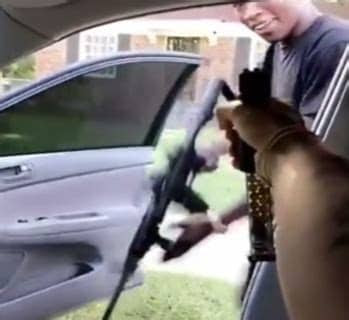