I Can Surmise Why

I was planning on doing a work-shy breakdown of the upcoming installation of Dusthead Joe and the Mystery Meat Mumbai Married Melanin Moron Mouth Masturbation Machine and how we should avoid this grotesque Clown World display and the alleged "armed demonstrations" we are told are going to happen but literally no credible people on our side are supporting. Maybe I'd mention Garth Brooks performing (I've got friends in low places/Where the vote fraud happens and the "broken pipe" chases/The electoral observers away/And the fraud will be okay) or the "crowd" of flags that presumably represent all the dead people who voted for this evil. Thank g*d something far more worthy of our collective attention came across my radar at the last possible moment. Believe it or not, Chiraq's magical 70 I.Q. negro southpaw has returned in a case of "muh dikk" gone wrong. Faced with evidence like this, it's practically impossible not to believe in a divine providence that loves us deeply.

Former Chicago Police Superintendent Eddie Johnson spoke for first time about shocking sexual assault allegations made by one of his subordinates when he was top cop.

I sincerely believed the days of hammering this moronic brown scumbag were over forever, but against all odds the "Wick juan bee muh raht, mester joo?" idiot is back with a "shocking" story about what it was doing while the Chicongo all against all was setting new homicide records and rapidly becoming a cold weather Liberia. Instead of fighting the pathology of the "African-American" it was engaged in its own criminal imbecility. Our country has a bright future.

Cynthia Donald is suing Johnson, accusing him of using his position as police superintendent to abuse and assault her. In a filing late last week, Johnson and his attorneys responded to the allegations, which include verbal abuse, intimidation and sexual assault.

The hominid brought in to restore honor to the badge after a horrific "racist" lynching of a barely armed "teen" suffers from a sexual emergency. This brown animal wanted to "gitt muh rape awn" while it was Police Superintendent. We hold these truths...you know the thing. C'mon, man.

In a sit-down interview with ABC7 Chicago, Johnson had a much different story to tell: he claims he was in a consensual relationship with Donald.

Great news, it turns out the disgusting Dark Continent deviancy and corruption wasn't as bad as you might have thought, according to a "black" blockhead known for lying about its poor behavior. It was just a "side hoe" and not actually rape by an ape. The accusations are false, just ask the dark dumbbell who will probably blame its sex crimes on a "new prescription." Next time get you dat Kamala Harris dome, nikka.

"You know, listen. For 60 years on this planet, 31 of which I was a Chicago police officer, and the last almost four as a superintendent, I've never been accused of anything like that, I've never forced anyone to do anything to do what they didn't want to do, that's just not my character."

Eye bee awn diss plan-net an sheeet. This totally unqualified genetic alien was promoted well above its feeble abilities and did an absolutely fantastic job.

The suit against Johnson and the city of Chicago alleges that Johnson carried out many unwanted sexual acts and told her "now you belong to me."

I know it looks bad, but "racism" accusations dropped by 3% during its time in this sinecure.

Johnson said he wants the public to believe him, despite the very high-profile incident in which he was found slumped at the wheel of his car in October 2019.

You can read all about this amazing event here.

Johnson maintains that he'd only had a few drinks that night, but an investigation by Chicago's inspector general said he had the equivalent of 10.

Since my primitive African click language only has words for "one," "two" and "many," it really wasn't that big of a lie. Johnson said there was an issue with his medications, but claims he was not drunk.

For the last time, it was merely "faded" on pills, not malt liquor. This is an important distinction.

"Like I've said, I had been drinking that night. But I never had an alcohol problem ever. I'll go weeks, months without having a drink," Johnson said.

It clearly didn't do [anything]. The bloated living fossil has gone long periods of time without "geddin muh goose awn." I'm convinced.

The incident ultimately cost him his job. In a fiery news conference, Mayor Lori Lightfoot announced Johnson's termination by saying Johnson lied to her and the public.

After it became clear the initial "he a grown-ass man" statement was proving inadequate, the beast with two right hands was sacrificed to save Mayor E.T.

And while he denies he sexually assaulted Cynthia Donald, Johnson does admit he betrayed his wife by having an affair with Donald.

The negro should begin approximating civilized behavior very soon. You just have to believe hard enough.

"No HR director ever wants a subordinate relationship with a superior because of the ramifications if the relationship goes awry, but that doesn't create legal liability," said Mike Leonard, Johnson's attorney.

My client wanted to get up in Aunt Jemima's guts and didn't really consider some of the larger legal ramifications of its "penis attached to a life support system" behavior.

His attorneys say Donald is suing Johnson and the city for monetary gain.

The negro lottery. You'll get the bill.

"I'm hurt. I'm hurt and I'm disappointed. None of those allegations are true. Why would she lie? I think that's the million dollar question. I can surmise why, but I can't get in her head. I can't," Johnson said. "Honestly, I actually pray for her."

More than a year after his termination, Johnson said his biggest concern is regaining the trust of his wife and family - and supporters.

Wow. What a hero. I'd be shocked, absolutely shocked, if this worthless evolutionary dead-end isn't completely vindicated in the very near future. 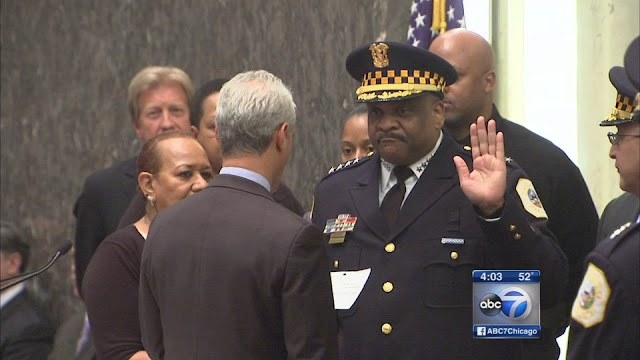