Yesterday was supposed to be Holocaust Remembrance Day, but a fresh crime was committed against innocent and precious jews who are hated for no reason by vile goyim (A slur that means "cattle" which the jew routinely applies to you and everyone you love). It turns out the poisonous mushroom money magic and shlomo the great and terrible behind it can be defeated by powerless video game junkies, many of whom have never even seen a vagina. Our mighty betters from zion saw their kosher con game crushed by people who were extremely excited about the release of "Cyberpunk." The precious hedge fund billions lost, man's inhumanity to chosen man, the ultimate crime. Now the rotten system is scrambling to protect the semitic voodoo economics from the unwashed masses. This vile cheat is for the chosen merchant, not you, you loser. I can hardly stop laughing. 2021 is going to be the best year ever, I can already tell. Speaking of the old haw haw, I'm not about to be derelict in my duty to remembering the first holocaust, not to be confused with the Game Stop one currently unfolding. Here's a scrupulously honest tale of how our ancient friends survived gentile terror by bringing the "lulz."

...and what is the deal with pedal-operated skull smashing machines? I mean, who are the marketing geniuses who came up with that one?

A clown in the famous Staniewski Brothers circus in Poland, his ability to bring humour to dark times eventually became his family's ticket to freedom.

The jew will do almost anything as long as it isn't useful manual labor that builds up a nation.

"While the Nazis laughed, they lived," says journalist Sue Smethurst, the couple's granddaughter-in-law.

I was supposed to murder you as part of a "Final Solution" to completely eliminate your criminal tribe, but those hilarious pratfalls and observations about airline food are just too valuable. Let's keep these particular two-legged rats around, even though the goal is to completely destroy the moloch worshipers.

In 1936 as the threat of war loomed, Jews were already being persecuted in the streets of Warsaw.

"There was a dark culture forming and a sense of fear in the community," Sue says.

We knew that our endless parasitism was about to be mildly punished.

As war broke out in 1939, Kubush was touring with the Staniewski Brothers Circus in Bialystok, about 190 kilometres away from Warsaw, where Mindla lived with their baby son Gad.

While Europe prepared to sacrifice an entire generation on the bloodstained altar of kosher war, we were doing a clown act.

Mindla would later tell Sue that after Hitler's planes began bombing Warsaw, the city was unrecognisable and food became scarce.

This is the kind of crime only a "not-see" would commit. Nothing like this happened in 1945, for example. Also, "We've got the shkotzim killing each other like we planned, but it is proving somewhat inconvenient."

In Bialystok Mindla was caught by soldiers in the Russian occupied zone, who thought she was a German spy.

Wait, what? "Russian" occupied zone? German spy? This is really going off the rails.

She would spend nine months jammed with dozens of other women in a windowless cell.

I'm not sure how this counts as part of the "holocaust," but on the other hand I'm unclean meat who deserves to die so these same alien grifters can have the mongrel slaves promised by their talmud.

In Warsaw, Kubush and other Jewish performers were hiding in plain sight, entertaining German soldiers with the circus.

The bumbling monster, the inept fool who also somehow conquered most of Europe, the German soldier as seen through the eyes of a walking tapeworm.

Eventually they received some news of Mindla — a mysterious parcel arrived from Bialystok containing a red sock.

Okay, that's enough of this. Let's just try to award a score to the horrible sufferink.

Sadly, this heartrending tale of Clown World War 2 must be thrown out because of a shocking failure to adhere to the accepted narrative. Please revise so that all the communists become evil "not-sees" and maybe add some more about family members being masturbated to death by machines or turned into living room furniture. 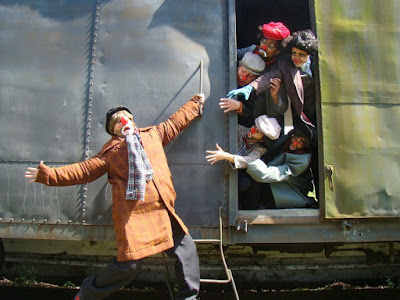