Now that Whites are the official holocaust goat for all the staggering failures of our national carcass, you're probably wondering how you can still loot America. The gelded careerism is certainly going to take a hit now that open hatred of our "unfair skin" is national policy, but there are ways to fight back. You can, for example, pretend to be mentally defective. Tell everyone you like putting building materials into your own rectum; this will help your chances of getting that "dream job" in our globalist bodega. After this fails, more extreme measures will be needed. Consider the amazing case of the Undercover Sista, who was able to fool the corrupt kosher apparatus by pretending to be a negro. Sadly, this incredible grift has fallen upon hard times and I think we're due for an update.

Infamous race-faker Rachel Dolezal, the white woman who was outed for pretending to be black in 2015, still insists she’s African American and complained in a recent interview she’s been unable to secure a new job for six years.

Unemployed for six years? Are we absolutely sure she isn't an "African-American?"

Dolezal, 43, who now goes by the Nigerian name Nkechi Amare Diallo, sat down for a talk on the “Tamron Hall” show to whine about how she wishes people could see her for who she is rather than “what” she is.

Nkechi here is a good girl, turning that life around, about to get new alien DNA from an unknown source, already went to college, etc. Please judge the "content of my character," says a woman who pretended to be a tar monster to advance within the communist indoctrination center. You'd think the mythical "White privilege" would kick in now that the shiksa snow job has collapsed. The jew told me we have an "invisible backpack," but I guess they weren't entirely honest.

“I started with applying for all of the things I was qualified for and after interviews and getting turned down, I even applied to jobs that didn’t even require degrees, being a maid at a hotel, working at a casino,” Dolezal told the former “Today” host in the interview, which aired on YouTube Monday.

Maybe you should have pulled an Elizabeth Warren before applying at that casino. Regarding the hotel maid position, your new name will be Juanita (I'm a Republican!) and you're from Honduras.

While employers didn’t outright tell Dolezal the culture vulture scandal was the reason for her rejections, she said it’s hard for them to look past the “false” information available on Google and Wikipedia.

We read these articles on Modern Heretic, I mean Wikipedia, and I'm afraid we've decided to go with another more qualified candidate.

“The only place that my true story lives is in my book,” Dolezal said, waving a copy of her widely lambasted memoir, “In Full Color.”

The New York Post bringing the high heat. Between this and "culture vulture," it's almost like someone with actual writing talent was responsible for this article. Be sure to read my critically-panned and commercially unsuccessful biography "Black Like Me 2: ZOG Strikes Back."

“I think that people, you know, aren’t going to go seek out my book if they’re just looking for an employee, so it’s been tough for sure, but I have not given up.”

Yeah. We need someone to deal blackjack, not a book about how late-stage imperial collapse made you sick in the head.

The mother of three and former NAACP leader also doubled down on her perceived black identity, saying she’s “always identified racially as human” but she’s found “more of a home in black culture and the black community.”

I have bastard kids, I don't work, I pull low-energy scams, I'm always the victim...you'll fit right in with the "black" community.

In 2015, Dolezal, who taught Africana studies at Eastern Washington University, was outed as a race faker after a local news reporter unearthed photos of her as a child and spoke to her parents, who were unequivocally Caucasian.

This is a story only a profoundly broken nation could produce.

She was ousted from her jobs and widely criticized for her dishonesty. 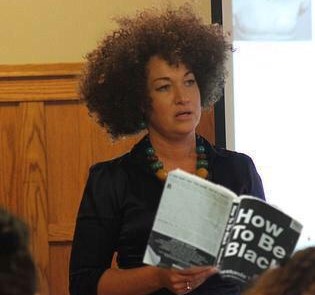