A Mention of Auschwitz

Today's incredible story came to my attention while I was reporting on a "Hey, rabbi..." incident yesterday and provides more evidence for the innocent and powerless state of American jewry. It's bad enough that the poisonous mushroom is on the receiving end of Dust Crime in the Sunshine State, but now the vile anti-semitism has even somehow infiltrated the Liberia Ball. Suffice it to say, this staggering "hate" was immediately punished and now the entire corrupt apparatus has swung into action to ensure uppity Botswana Ball gentiles and schwoogies never commit the crime of calling the "throw it to the nearest tar monster" play "dreidel" ever again.

Massachusetts lawmakers are renewing a push for mandatory genocide education after a high school football coach was fired following reports that the team used anti-Semitic language, including a mention of Auschwitz, in its on-field play calling.

I'm a bit puzzled how the conclusion of "more holohoax indoctrination" follows from the initial premises, but I'm sure a steaming helping of Soviet war propaganda will cure the Tanzania Tackling Thought Crime. Once you learn about the blood geysers, the giant tree jews had to climb that was then cut down by "nazzees" to kill all the brachiating chosen, the movie theater, the color-coded cremation smoke, the shrunken heads, the skull smashers, the swimming pool, the deadly homicidal gas chamber with wooden doors and glass windows and all the rest you'll go back to calling "give it to Barkevious" Blue 99 or something instead of "overloaded crematory oven left stunt."

The Massachusetts Senate last year approved a bill that would require instruction on genocide before students graduate from high school. The legislation failed to reach Republican Gov. Charlie Baker’s desk.

With White genocide creeping closer I don't think we're going to need special classes. You can just look out the window.

It must be nice to always get whatever moronic whim your criminal tribe has.

“As a Jew who lost family at Auschwitz, a daughter of a WWII veteran, I find the news about the Duxbury football team and their use of anti-Semitic language appalling,” the Democrat tweeted.

Under every rock. My entire family went up the chimney at what a news bunny called "Ows-a-wits." My other father, the one who wasn't killed when the "not-sees" sucked all the air out of a room, bravely served in the American golem, fighting for kosher communism. With this lineage of courage and sacrifice, it's probably not surprising that I got mad at some "Give me five more laps, ladies!" Rwanda Rugby blowhard's loose lips.

Spilka went on to tweet that “we need this to be more than just a ‘teachable moment’ — we need sustained, increased education — among administrators, educators, coaches, officials, referees and students — so that this never happens again.”

My spellcheck thinks Holodomor isn't a word. Ask your typical slumbering White who Genrikh Yagoda was and get ready for a blank stare. We're routinely lied to by our talmudvision, our schools and our criminal government. We need "sustained education" because Coach Cuck made forbidden sounds.

Under the bill, every state school district would be required to include in its middle and high school curriculum a unit of instruction on the history of genocide.

Today class we'll be discussing how semitic communism killed 100 million cattle, a slur they call you and everyone you love, during the disastrous jewish century. Just kidding, it's going to be the special and unique sufferink of the alien parasite and maybe some "muh slabery," time permitting.

Teaching about acts of genocide around the globe would help promote human rights issues and warn that “national, ethnic, racial, or religious hatred can overtake any nation or society, leading to calamitous consequences," according to the text of the bill.

Wow, I never thought of it that way. In other news, we're at war with White supremacy, all Whites are bad, we're the real virus, Whites are like some demons (huh huh huh), etc.

House Speaker Ronald Mariano said that as a former teacher, he recognizes the importance of teaching about genocide to help stem bigotry and intolerance.

You're electing teachers? What, was no philosophy major available?

Supporters say they are troubled with how many younger people are unaware of the scope of the genocide that occurred during World War II, in which the Nazis killed more than 6 million Jews in Europe.

You need to educate yourself on [a kosher lie so ridiculous believing it is a form of humiliation], you unclean meat.

Duxbury High School this week said it has severed ties with Coach Dave Maimaron, a special needs teacher at the school, who was placed on paid administrative leave from his teaching position pending further investigation of the play calling.

Sorry retards, your teacher openly used the "Dee word" and got the hook from moloch worshippers.

The announcement came the day after Robert Trestan, president of the New England Anti-Defamation League, called for an independent investigation.

Another proud moment for a jew hate group created to try to pin the rape and murder of a White girl on a negro dullard instead of the chosenite sweatshop owner who actually committed this appalling crime.

Trestan said he was told by district Superintendent John Antonucci that the words “rabbi” and “dreidel” were also used in Duxbury’s March 12 game against Plymouth North. Plymouth school officials alerted Duxbury about the matter.


I plotted to kill Comrade Stalin, etc. I'd be uh-mazed if you're not immediately forgiven after this quality groveling.

State Sen. Barry Finegold, a former college football player who is also Jewish, has offered to talk to the team.

I'm sure the dusky genetic aliens will be absolutely thrilled to hear from the descendant of slave ship owners. 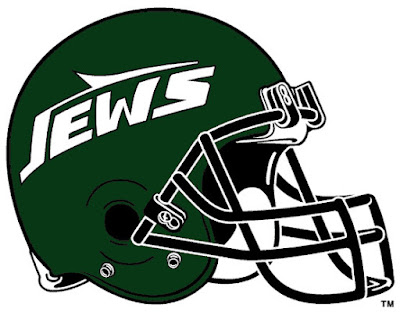