I would like to take this opportunity to salute all the heroes of our kosher international economic zone. We've got the best sodomites, heroically putting building materials into their rectums, to say nothing of the brave and stunning genital mutilation mental defectives. Don't forget the "front line" paragons facing down the deadly "pandemic," making cringe videos and hiding in sheds. Last, and certainly least, are the brave cannon fodder serving proudly in the American golem and defending our highly legitimate government from the scourge of "White Nationalism." Thank g*d for our troops who are stopping "insurrections" and guarding our "holy buildings," at least until it's time for them to go die in Syria or Iran for the jew.

Multiple Michigan National Guard troops have been hospitalized after being repeatedly served raw, undercooked meat, including meals with metal shavings, while deployed in Washington DC.

If this is the worst thing that happens to you in the ZOG military, you really got lucky.

A whistleblower revealed to 7 Action News that National Guard troops in DC were being served raw, undercooked meals for several weeks, causing many of them to get sick and be sent to the hospital.

I know it looks bad, but legions of Peter Pan syndrome costume terrorists might descend at any moment. The mystery meat "nazzee" asking random degenerates on the internet "What do you think of the niggers?" might use force to overthrow the most honest, transparent and popular administration in American history if we don't have armed NPCs serving 18 hour long shifts and eating metal shavings.

On Sunday, almost 75 meals were subsequently thrown away after they were found to have contained pieces of metal inside.

"We need to test this nerve gas. Let's use it on our own soldiers."

The disturbing report also suggests that service members have been subject to inadequate portion sizes when being served meals.

Oy vey, there's iron filings in my raw meat. And such small portions! Is it just me or is it really humid in this parking garage?

For breakfast, “You were getting maybe a Danish and some sort of juice,” said the sergeant. For dinner, “we had certain days where it was clearly a dinner roll and Sunny D.”

I'm definitely getting some "for breakfast we had nothing, for dinner a thimble of dog soup" holohoax vibes.

In one instance, 12 National Guard members fell ill after receiving undercooked meals, with some being hospitalized.

We're taking heavy casualties in the war against White self-determination.

Respite for the National Guard does not appear to be on the schedule any time soon. As National File reported, The Biden regime is demanding that National Guard troops should be deployed in DC through the fall of 2021.

Moronic brown soldiers in the streets protecting a criminal regime. Welcome to the third world. You are now living in Liberia and El Salvador thrown into a semitic blender.

Democrat Governor of Michigan Gretchen Whitmer has reportedly been informed of the situation, saying that the food quality was “unacceptable.”

How are they supposed to defend the American junta when they're forced to subsist on Sunny D and maybe some of that purple stuff in the back of the fridge?

The Post Inaugural Security Mission is a multi-state taskforce, including Michigan’s 1000 personnel, under the command and control of the Washington D.C. National Guard.

In Clown World the punchline is a bullet to the brain from a malnourished sleep-deprivation mud monster wearing jungle camouflage in an urban area.

This would not be the first time that National Guard troops in DC have been subject to mistreatment following the inauguration of Joe Biden.

Just two days after he was sworn in, National Guard troops were ordered to sleep on the floors of parking garages.

Now that we've sacrificed our nation to moloch in the crime of the century you can go sleep in that oil stain, you dumb animal.

President Donald Trump allowed them to be housed for free in the Trump Hotel in DC as a result, as National File reported.

The phony tough guy and feckless jew tool with a heart of gold. 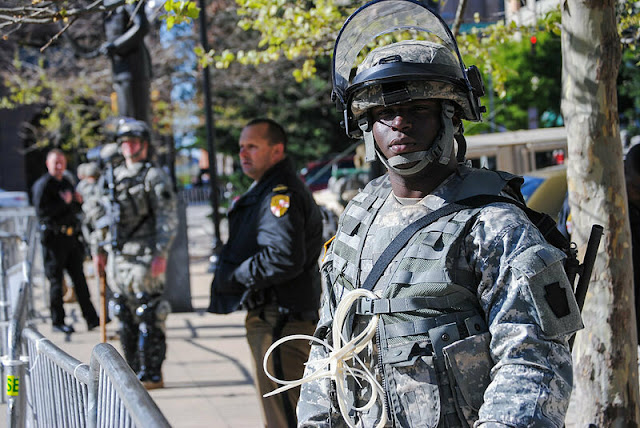