The Republican's Embrace of Fascism

Muh democracy in general and the Loser Party appendage of this kosher snow job in particular have a bright future. If you don't believe me, consider the vibrant and exciting cuckservatism on display at CPAC, an annual summation of what the Democrats supported five years ago. We got a speech from the phony tough guy, a "we wuz kangz" negro got banned for naming the jew and the usual worthless hot air from the Washington Generals of our political shell game was successfully delivered. But hold up, Darnell! It turns out the tepid appeasers and proud defenders of sodomy and low taxes are actual, literal "nazzees." I know it seems perhaps a bit indiscreet to make such an accusation of the "...and Israel!" careerist defeatists, but just wait until you see all the evidence. It seems the entire "endorse a watered-down version of the Evil Party's anti-White lunacy" is actually an unbelievably clever ploy to get secret Fascists like Mitt Romney and Marco Rubio into positions of power, where they can then begin forcing innocent jews into skull-smashers and masturbation machines. Trust the plan, this is one hundred dimension chess.

The 2021 Conservative Political Action Conference (CPAC) has made a bold and unequivocal statement about where their loyalties lie: squarely with the hateful rhetoric and policies of former president Donald Trump.

I wish I lived in a world where any of this was even slightly true. The zionist lapdog, "Platinum Plan" delusional and "we have the best sodomites, don't we?" tanning bed victim is probably better than any of the other alternatives, but that's more of an indictment of our broken semitic One Party System than it is an actual endorsement of Orange Man's feckless civic nationalism. Fool me once...shame on...you? Fool me twice? Won't get fooled again!

This includes CPAC attendees going all in on white supremacy and Nazism, from their talking points, speakers and actions down to the very design of their main stage at the Hyatt Regency in Orlando. Twitter users pointed out the the stage design is a replica of the Odal rune.

I never knew that low "African-American" unemployment, slavish devotion to Israel and the complete abandonment of a vilified White working class were the central tenets of "Nazism," but I guess it's just another meaningless word to throw at people you don't like. Besides, I have on good authority that "witchcraft rune-ing" was occurring during the surrender seminar. You can call demons like that, huh huh huh.

Less known than the swastika, the Odal rune dates back to ancient Germanic languages and symbolizes heritage, inheritance, or inherited estate.

Wow, thanks for the history lesson, unhinged leftist useful idiot. We will now explain why your heritage is bad and needs to be destroyed.

As the emblem of ethnic Germans (Volksdeutsche), the Odal rune appeared on the flag of the 7th SS Volunteer Mountain Division Prinz Eugen operating during World War II. The Odal rune was also prominently featured as a badge on SS uniforms, and has been co-opted by neo-Nazi groups, including the National Socialist Movement(NSM), across the globe.

They proudly served in the Prinz Eugen division so that degenerate mob rule could send a "das rite" negro to the capitulation convention, but sadly Barkevious mentioned the jewish problem and is going to sit this one out. Still, we've got some real fighters in a party that hasn't won a single meaningful victory against the communists in living memory. My heroic ancestors are smiling down on me. Can you say the same, Republican?

The horrific stage design is less of a dog whistle and more of a primal scream, symbolizing the republican party’s overt support of white supremacy and Nazism.

Imagine having the interior of your head so badly damaged by the jew that you actually believe this. Heil Cruz! Heil may-hee-can vacations!

They’re not even trying to hide it anymore.

They can't keep getting away with it! Our democracy is dead, our country is insane, the total collapse is coming, but I'm really worried about how my pareidolia acted up during the defeat discussions.

When pressed for comment, Hyatt released a statement saying, “We take pride in operating a highly inclusive environment and we believe that the facilitation of gatherings is a central element of what we do as a hospitality company. We believe in the right of individuals and organizations to peacefully express their views, independent of the degree to which the perspectives of those hosting meetings and events at our hotels align with ours.”

This is the face of pure gentile evil. Six million dead in homicidal gas chambers. It's starting all over again. You need to give up your few remaining rights.

So Hyatt is basically saying that a giant Nazi symbol on display in their conference room is a gesture of tolerance? That is quite a ghoulish take.

The left openly uses communist symbols that 100 million died under during the disastrous jewish century. The "right" has a stage that looks like something from a mountain division's insignia. Imagine if the races were reversed. Dems are the real "racists." We're going to get the tar monster off the Democrat "plantation."

The Republican party’s affinity for white supremacy is, of course, not a shock.

We all remember the "Ivory Plan" to give 500 billion shekels to American Whites. What color is the sky in the fantasy world you live in?

Congressman and alleged insurrection supporter Paul Gosar (R-AZ), even spoke at a white nationalist conference in Orlando, Florida on Friday night, where he was the keynote speaker at white nationalist Nicholas Fuentes’ “America First Political Action Conference” (AFPAC), before speaking at CPAC the following morning.

Some mongrel la-teen-oh "my political activism is all a narcissistic joke" huckster is a "White Nationalist." What an odd crop of "not-sees" we're growing here in Year Zero.

There is no more clear and present danger to our democracy than the republican’s embrace of fascism and white supremacy.

It certainly isn't the massive and systematic kosher vote fraud that just happened.

Vote them all out and hold them accountable for their blatant Nazism.

Only Clown World could produce a sentence like this one. 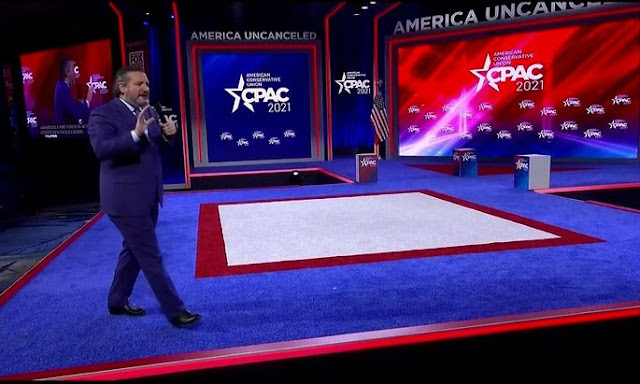