As the latest marxist offensive against our gun rights enters a new stage that could be fairly characterized as "completely insane," our criminal government and its propaganda apparatus have finally decided to pretend negro monkeyshines in our decaying cities are a compelling argument against being able to defend yourself in the coming all against all. Yes, look at all the "mass shootings" in Chiraq, Detoilet and Bodymore, shkotzim. You need to be disarmed. It's definitely a bold strategy, but there aren't enough "My Little Pony" massacres and we can't let another useful crisis go to waste. Brown creatures are behaving poorly (shock!) and the average Vichy American should be punished.

A 7-year-old girl is dead and her 29-year-old father hospitalized after they were shot in a McDonald's drive-through on Chicago's West Side, CBS Chicago reports. Late Sunday, police said the shooter or shooters were still on the loose.

It's time to sit in a car in the Chicongo zoo. Clown World meets Clown Burger. A creature straight from a nightmare was hoping to order "muh chuken," but instead ends up "holding corn" at the 365 Black McDonalds. The closest thing we have to an intact "African-American" family ends in tragedy. Tar monsters are blasting their larva. What in the world do you need a twenty round "clip" for, goyim? We're going to take your "assault weapons."

The station says a Chicago police officer rushed Jaslyn Adams to a hospital after she was found in a bullet-ridden car sitting in a McDonald's drive-thru. She was pronounced dead at the hospital.

Be sure to see the Jaslyn Adams death car when you visit the museum of jig-a-boo-American history.

Chicago Police said he was shot in the upper body. He was taken to the same hospital as his daughter and was reported in serious condition and is expected to survive.

Don't worry, you'll get the bill for the heroic medical care. Get the nurses from the shed; we've got some evolutionary dead-ends who became slightly more aerodynamic.

At least 30 shell casings surrounded the vehicle after the shooting at 4:18 p.m., CBS Chicago says. The tinted windows on one side were shot out. There were bullet holes in the frame and back window, as well.

If only we had the "Platinum Plan," this could have been prevented. Inside every one of these worthless inferiors is a cut-rate White trying to get out. You just need to keep pouring the shekels into this yawning abyss.

It wasn't clear if the shooting was targeted, but authorities haven't said the public is at risk.

It really is a complex and impenetrable mystery. We need Sherlock Holmes on this one.

The Chicago Sun-Times says a McDonald's employee who asked not to be identified told it two people got out of a gray car in the drive-thru and started shooting at Adams' car.

In the coal creature equivalent of the Battle of Cannae, the tactical weakness of the "dinner timin" automotive queue is exploited by living fossils. They came really close to ending their actual target. We hold, the truths, just hold 'em, c'mon man, pony soldiers, etc.

This will keep happening until we start to blame the root cause: White supremacy.

Chicago Mayor Lori Lightfoot spoke out about the shooting on Twitter Sunday night, saying she was "heartbroken and angered" and calling for an end to "the epidemic of gun violence."

We are in the midst of a deadly gun pandemic. No one can shop here without full body armor. 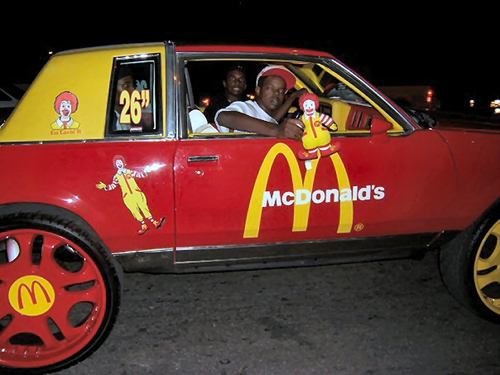